Two Ways To Profit With This Sleeper Media Company

Honestly, with the seemingly infinite universe of accessible video entertainment available, every now and then I kind of miss the days of three or four channels from a television that was made to look like furniture. Then again, if that were still the case, we’d probably complain about nothing being on TV.

There’s absolutely NO excuse for that complaint today.

Of course, the fastest growing segment for video content delivery is streaming delivery with Netflix (NASDAQ: NFLX) — the perceived 800-pound gorilla in that category. After all, they are the “N” in the FAANG stocks.

It’s a crowded field where at times the competition resembles a Viking bar fight. But I’ve found one company that’s quietly gaining momentum, and the market has yet to notice it.

Dish Network Corp. (NASDAQ: DISH) is commonly known as the second fiddle to AT&T (NYSE: T) satellite service DirecTV, with around 11 million subscribers to DirecTV’s 25.36 million. With the growth of streaming, it’s no surprise that satellite television is a maturing business. Naturally, both companies have joined the streaming brawl. Dish with Sling and AT&T with its DirectNow service.

When you start drilling down into the numbers, things get interesting.

Sling is the clear leader in the satellite to streaming conversion war with 2.2 million versus DirectNow’s 1.5 million. That’s a drop in the bucket going up against Netflix’s 100 million subscribers. However, Sling subscribers and Netflix subscribers have a lot in common. 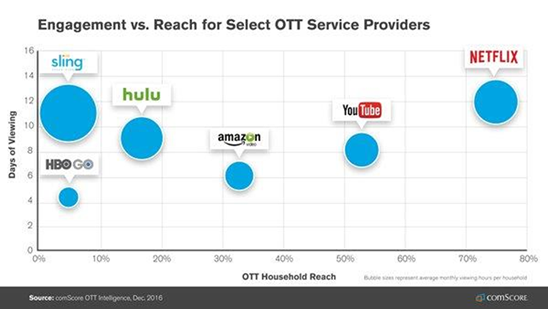 According to this chart from comScore, while Netflix has a deeper household penetration (covers more viewers), Sling users are spending just as much time with Sling-distributed content as Netflix users.

Sling has won half the battle by holding eyeballs longer than the competition. The ability to deliver content that drives that is the reason. How do they do that?

Sling is all live streaming. Whatever is running on ESPNU at 2:30pm on a Wednesday is what you will find. Netflix and its competitors are on demand services. Sling and DirectNow are truly cord cutting alternatives. Both have existing, deep access to live content.

There should be no surprise that both DirectTV and Dish plan to cannibalize their satellite business and shift to the streaming platform. DirecTV, as we all know, is now part of AT&T. Dish is still independent. Someone will acquire them. Here’s why:

Execution — Dish grew Sling subscription at a 47% rate in the fourth quarter of 2017. That’s powerful. Granted, Sling’s basic service for $20 is much lower than that of Dish service. But, the goal is to make it up in volume. Streaming content delivery is easier and much cheaper.

Value — If (when) Dish is acquired, the buyer gets a helluva platform at a bargain. The stock trades with a forward PE of just 12.9 and at just 1.1 times revenue. But the real prize is free cash flow.

Risks To Consider: Again, the satellite TV business is rapidly maturing and Dish is the distant No. 2  player. It relies on its legacy business to generate the cashflow to grow Sling. Any slowdown in the main source of growth capital (free cashflow) will hamper that effort. Also, like most telecom companies, Dish relies heavily on debt financing. As interest rates rise, margins can get squeezed. The good news is that it appears management is cognizant of that and is getting out ahead of the issue.

Action To Take: Dish shares trade at around $33.50 with a 12.9 forward PE. That’s mighty cheap for the growth numbers the company is delivering. The business is an extremely attractive acquisition target based on Sling. Assuming the story remains consistent, a 30 to 35% takeout premium wouldn’t be unrealistic.

The stock does not pay a dividend, though. For income-oriented investors who would like exposure to the opportunity, there are plenty of Dish bonds out there. The most attractive issue comes due in 2024 (6 years) and are trading at a 15% discount to their face value yielding around 6.8%. The bonds would move in sympathy with the stock around any takeover news. Caveat: they are below investment grade.

Editor’s Note: Who’s #1 in the New Legacy Assets Portfolio? Is it the company that’s poised for 650% growth in China? Or maybe it’s the stock that’s doubled 5 times in 12 years? Is it the firm destined to become the world’s first trillion dollar valuation? Or perhaps it’s the corporation that just cracked Fortune’s Top 10 Most Profitable List? One of these Legacy Assets earned the top spot… but every single one of them should be in your portfolio today. Click here to discover the impact these “bomb proof” Legacy Assets could have on your nest egg.