There’s Still Time To Get On Board This Megatrend

Buying a home is the part of the American dream. Finding the perfect house with the proverbial white picket fence. A place to raise a family and grow old together. For most, it’s the most significant purchase we’ll ever make, and we squirrel away thousands, even hundreds of thousands of dollars for that down payment.

The days leading up to closing are a mixed bag of excitement and anxiety. But you’ve done your due diligence on the property and feel comfortable with your decision. So, what could go wrong?

For James and Candace Butcher, the answer is “everything”…

This Colorado couple had found their dream house. A place to be closer to their son and watch their grandchildren grow. They had a sizeable chunk of change — roughly $272,000 — to use as a down payment on their new home.

Just one more day and the house was theirs. They could begin making it their own. But over the next 24 hours their dreams turned into a nightmare. Not only did they not get the home, but their entire life savings was gone.

You see, cybercriminals hacked into the title company’s servers and obtained financial information relating to the house purchase. They then sent a bogus email to the homebuyers impersonating a title company employee. The email was a “final” closing disclosure, telling the couple to wire funds in the amount of $272,535.96 to close on the property.

The money disappeared. Buying the house was no longer a possibility, and they had to live in their son’s basement as they tried to figure out what to do next. The money was never recovered.

As if the hurdles you go through just to buy a house weren’t enough, these days you must stay on the lookout for modern-day thieves, lurking in the shadows ready to steal your life savings.

The Butcher’s aren’t the first, nor will they be the last, victims of this type of fraud. According to the FBI, about $150 million was diverted from real estate purchase transactions and wired to criminally-controlled accounts in 2018. This was up substantially from the $19 million in wire transfer frauds affecting homebuyers in 2016.

Wire fraud is just one piece of the booming cyber criminal industry. Cyber theft is the fastest-growing crime in the United States. According to a report by Cybersecurity Ventures, global cybercrime costs could hit $6 trillion annually by 2021, up from $3 trillion in 2015. It’s hardly news anymore when we hear of this company or that company whose systems have been hacked, resulting in stolen personal information. Just look at a few of the names on this list of victims:

Then there’s the problem of so-called ransomware, a type of malicious software that blocks access to a computer system until a sum of money is paid. In 2017, for example, the ransomware cryptoworm known as WannaCry spread like wildfire across the internet. This malware seized computers and software, making them unusable. To get back online, victims had to pay a ransom in the form of the bitcoin cryptocurrency.

WannaCry quickly spread to more than 200,000 computers across 150 countries in a matter of days. Hospitals, banks, and large, well-known companies across the globe were affected. And while experts were able to release software patches to eventually mitigate or block the malware, total damages from the attack were estimated to be in the hundreds of millions to billions of dollars. The Trump administration publicly blamed North Korea for the WannaCry cyber attacks, along with officials from the UK and Australia.

How You Can Invest In This Powerful Trend

I first talked about this problem in a September 2017 issue of Top Stock Advisor. I told readers that they could gain exposure to this space through exchange-traded fund Prime Cyber Security ETF (NYSE: HACK).

As the name implies, this is an ETF that owns a basket of some of the top names in the cybersecurity business. Since I first recommended HACK, the ETF has gained more than 42%, compared with the S&P 500 27% return over the same period. 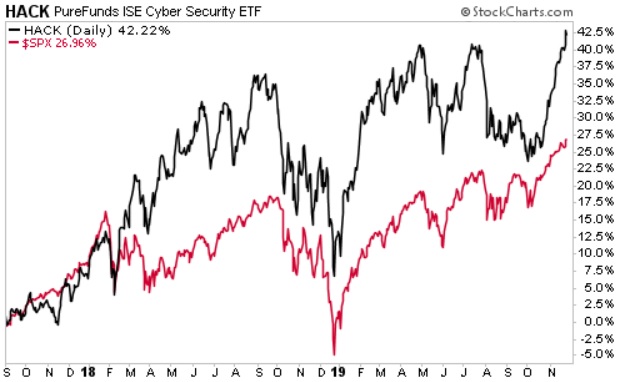 But if you didn’t act then, you haven’t missed the boat. This is an emerging sector with plenty of growth ahead.

In fact, investors have a number of enticing publicly-traded options in this space, including including Carbonite, Splunk, Fortinet, Palo Alto Networks, FireEye, CyberArk Software, and more. And new cyber-crime fighters coming online nearly every day.

Of course, you can’t go wrong with the HACK ETF, either. Not only does it own the indurstry-leading names I just mentioned (as well as a few more), but it allows you to get instant diversification and ride this megatrend without having to spend the time gaining the expertise to pick a winner. Either way, this industry isn’t going away any time soon. Growth-minded investors owe it to themselves to look into this space further.

P.S. Mark your calendars for Black Friday this year. That’s because on Friday, November 29, my colleague Amber Hestla will be hosting an online masterclass where she’ll teach you everything you need to know to make simple, effective high-payout trades that will help you generate more income than you ever thought possible. In fact, we’re so sure you can use his program to become an income millionaire, we’ll pay you $1,000 to get you started. Go here to learn more and sign up for this one-of-a-kind event.