The Potential For This Technology Is Unlimited

It was 1989. I was in junior high in Wichita, Kansas, and I had a great scam going. Instead of a full load of classes, this honor student got a gig as an assistant in the library. Study hall was an option, of course, but being a library proctor gave me course credit — and an easy “A” at that. Plus, I had unlimited access to an hour of time where I was pretty much free to look at books and magazines and let my mind wander.

#-ad_banner-#I’d shelved the books on my cart and grabbed the latest Fortune magazine. One of the articles concerned IBM, which interested me because it was one of my Dad’s favorite companies.

I understood computers and what they could do, and certainly I was familiar with our Selectric typewriter, but the IBM story didn’t make any sense to me…

A team of IBM’s scientists had attached a computer to an electron microscope and used it to arrange 35 individual atoms to spell out the company’s initials, “IBM”.

I took the magazine home and showed it to my Dad, asking him why IBM would even try to do such a thing.

His answer was straightforward: “Because they can.”

This was my introduction to a field that would come to be known as nanotechnology. And in the thirty years or so that have elapsed, nano has come a long way. And you’re just not going to believe where it’s going.

Preventing Heart Attacks
Today, this technology is 29 years old. And like every technological innovation, has infiltrated our everyday life.

In fact, since 2005, which seems like yesterday, some 1,628 nanotech commercial products have been brought to market, according to a study from the Woodrow Wilson International Center for Scholars.

So how do you take advantage of this, as an investor?

Well, that brings us to a problem with nanotechnology — it is controlled by very large companies. Think Samsung, Panasonic, BASF, Intel. These are the companies that can afford the research and that have the facilities to develop technology. Much of the cutting-edge work in nanotechnology is being done using Big Money at the university level.

The scientists who make the critical discoveries sometimes start companies to pursue new ideas, which get bought by the likes of Samsung before they even consider going public. So these companies are fairly difficult to find.

But I found one that fits our criteria perfectly… because this company is small with lots of room to grow… It has a market cap of just $25 million. That’s a tiny fraction of huge nanotech leaders like the $77 billion giant BASF.

It’s well established, having been around for 25 years. And it’s a key supplier of nanotech materials for nano leaders in medicine such as Roche and Schering-Plough… chemical giants like BASF… auto manufacturers and cell phone factories around the world.

You may not realize it, but this company’s nanomaterials are in products you already use every day… suntan lotion, car windshields, plastic water bottles… your smartphone, the exterior coating on your home… in medical labs… it’s everywhere.

All the large manufacturers are using this technology. They need suppliers that can deliver it.

In its most recently quarterly filing, this company reported a 16% year-over-year revenue growth. That is exactly the rate at which this industry is growing.

Let’s not gloss over what that means. If the current value of the nanotech space is $1 billion today, at a compound annual growth rate of 16% it will quadruple by 2025.

Of course, the value of the market is already WAY more than a measly billion bucks — and the best projections forecast it approaching $100 billion in the near future.

I keep a very close eye on these sorts of things, and I’m here to tell you that very few sectors of the economy are likely to see even HALF that level of growth through 2025. This is a train we very much want to be on!

Investing in my latest recommendation is a no-brainer. And I want to give you the full details now.

Your Ticket To The Investing Big Leagues
The last time I shared my stock picks with the public, I made 140 recommendations that at least doubled. 46 stocks of those quadrupled or more… 25 went up over 500%… and 6 became ten-baggers (yes, that’s 1000%).

And I was averaging nearly two of these a month for six years.

Now, I’m doing it all over again in my new service, Fast-Track Millionaire. I started this service in March, and originally admitted only 520 new members.

That’s because the opportunities I’m showing you aren’t popular blue-chips yet. They’re not that huge. Some trade only a few thousand shares a day.

As a result, I can’t have thousands of investors following my advice, buying up thousands of shares each, all at once. Doing that would immediately drive those share prices up and then nobody could get in at a fair price.

So I had to limit the membership to Fast-Track Millionaire.

Now, a few months after the inauguration, I can see that increasing the membership by around 10% will not harm my subscriber’s chances to get in at a good price.

Because of this, I’m inviting you to become one of 50 additional Fast-Track Millionaire members.

If you aren’t sure whether Fast-Track Millionaire is for you, I strongly encourage you to watch the rebroadcast video of our summit anyway.

And if you sign up for a trial, you can read my reports, follow my research, and still have 30 days to decide whether or not my work is right for you. All on the house.

So the choice is yours:

You can keep investing in the same companies your neighbors and coworkers are buying… Get excited about a 20% return, and keep dreaming about hitting the big one…

OR… you can use the same research that has already delivered a ten-bagger per year… And helped so many everyday readers reach their financial goals.

This is your one opportunity to get on board. I urge you to take the next step and click the “play” button below. 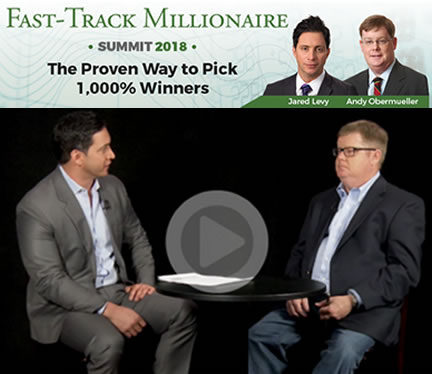