Can The Market Rally Hold? Here’s My Take…

After peaking August 29, the S&P 500 spent much of the following week sliding lower. While the drama in Washington may be partially to blame, I think the action we are seeing now is more of a normal ebb and flow than a bigger shift in market sentiment.

In other words, this is healthy.

From my perspective, there’s been little change in the overall picture, and I firmly expect buyers to step in and move us back higher after a little more needed pullback.

As long as the 2,873 support level in the S&P 500 holds (or is not violated by more than 1% for three-plus days), the technicals remain in place for the bullish trend to continue.

#-ad_banner-#This pullback is further justified by all the profit taking we’ve been seeing in some of the most influential stocks in the index — such as Apple (Nasdaq: AAPL), Netflix (Nasdaq: NFLX), Amazon (Nasdaq: AMZN) and others — many of which are coming off huge, almost parabolic rallies. (Apple is a good example of this.)

Signs of Danger
Also adding (moderately) to the pullback momentum have been the continued rumblings from high-profile analysts at white shoe firms, warning about inflated valuations and indictors that may be signaling danger.

Part of the report focused on Goldman’s bull-bear indicator, which currently shows that the likelihood of a bear market occurring is at its highest point since around the mid-1970s (see chart below). The bull-bear is an amalgam of five market factors and has data going back to the 1950s. While it’s not a fantastic predictor, the outlier reading we are seeing now certainly seems a little ominous. 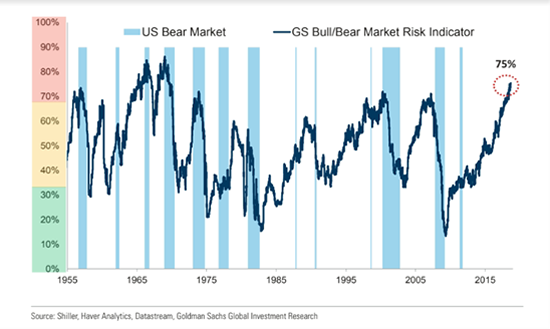 But if you read the entire report, you’ll find that it really just says more of what we already know: We are in a 10-year rally that has yielded above-average returns, and investors shouldn’t expect to see a prolonged continuation of this trend.

Thanks, Goldman. Way to give us some earth-shattering predictions…

Needless to say, I still follow the headlines and tone of the talking heads closely. Aside from the perma-bulls and bears, one can listen to what the majority of analysts are saying. And though anecdotal, it helps to get a fair sampling of sentiment. Right now, it seems the path of least resistance is still to the upside, but convictions seem to be more easily swayed.

For the time being, eyes are largely focused on Washington and President Trump’s continually shifting policies and Twitter rants, which can give and take billions in a matter of seconds.

The political catalyst du jour is the renegotiation of NAFTA, which is going well, according to Reuters and other sources. Canadian and U.S. officials seem to be making progress; if all falls into place (which I believe it will), markets should view this as positive, sending stocks higher.

We could also expect to see commodities rise a bit (after taking a beating last week) — but, again, none of this is certain. So much is on the table with these talks, and almost anything can happen, so it’s hard to anticipate the market’s probable reaction.

Because I cannot forecast the outcome, I recently told my Profit Amplifier readers that we’re holding off on our next trade until we have more clarity and color on a potential NAFTA rewrite (or maybe an entirely new agreement).

Even news of a complete breakdown in the Canadian talks (which I highly doubt) would provide good insight, as we’d at least get an idea of how markets will respond.

And let’s not forget that the ongoing China trade spat could also become an increased burden on the American consumer and our economy. But again, there are multiple potential outcomes here, none of which are certain.

An Invitation To Trade With Me
While the rest of the crowd is simply buying stocks and hoping for the best, my Profit Amplifier subscribers and I have spent years “raiding” the market with our simple options trades, taking more than our fair share of gains.

I’m talking about returns of 31%, 35%, and more — all in a matter of weeks, rather than months or years. Bottom line, my stock market raiding technique is the best way to increase your returns while preserving capital and reducing risk. Of course, that’s only if it’s done correctly.

That’s why I created a special report that will walk you through the steps I take when going on market raids, which should help you avoid the costly mistakes many new traders experience. If you’d like to learn more, go here.