With all the talk about value stocks coming back any time now, I believe investors — bargain-seekers and traders alike — should remain cognizant about the dangers of value-traps.

Just as you wouldn’t buy just anything you found in a clearance bin, you should never buy a stock solely because it’s cheap. Many stocks are cheap for a reason, and the market keeps these stocks at an almost-permanent mark-down because it knows, or senses, trouble. The numbers might say the stock is a bargain, but if no one else starts buying shares (pushing the stock’s price higher), you’ll never realize a profit on your “value” investment. Hence, the term “value trap.”

Most of the time, there’s a good reason why everyone is avoiding these seemingly attractive stocks. The company might be in a declining industry… or it might be facing too much competition… or it simply might not be executing as well as investors believe it should. Other times, there might not be any discernable reason at all… investors just don’t like the stock.

#-ad_banner-#Whatever the cause, falling victim to a value trap is a great setup for disappointment.

The good news is that value traps rarely suffer from sharp selloffs. Still, these undesirable investments are much more likely to decline over time rather than grow, and while this decline is typically slow, it’s relentless.

What To Sell Now
As some of you may know, I recently took over the reins for StreetAuthority’s Fast-Track Millionaire service. One of many changes I’ve already implemented to the service is a What To Sell Now feature — because I firmly believe the way to big-time profits is just as much about what to sell as much as it is about what to buy.

Below I’ve highlighted what I see as a few such value traps. These are stocks that will in all likelihood underperform the market, which means they’re stocks you will want to avoid if you don’t own them (or sell if you do).

Today, I want to focus on U.S. retail, which is an industry in transition. It’s also an industry that has historically been difficult to succeed in — the margins are notoriously low, and competition is notoriously fierce. With the advent of “e-tailing” and Amazon’s (Nasdaq: AMZN) complete dominance over all things “retail,” that success is now even harder to come by.

It’s survival of the fittest in U.S. retail. And some of the least-fit companies have made my negative list today. 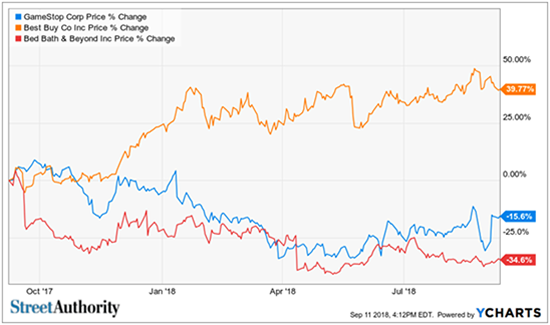 Value Trap #1
I used to like GameStop (NYSE: GME). This specialty retailer seemed better-positioned than many to survive the seismic change in retail. I had respect and high hopes for its business — selling computer games and other entertainment software — as well for its efforts to diversify, with a growing line of business in collectibles, as well as a stake in wireless.

The decline of brick-and-mortar retailing, however, didn’t leave GME unscathed. And its business turned out to be nearly as cyclical and fade-reliant as for a fashion retailer. That’s because customers flock to its stores when a highly sought-after video game is released, and those releases are quite unpredictable.

In fact, it’s the ever-changing schedule of new game releases, as well as a dearth of best-selling titles, that have been plaguing GME in the past few years. Add to this the ongoing shift to online gaming and it’s no wonder GME’s per-share profits have declined for the first time since 2014 and are expected to continue declining this year and next.

While the company is not exactly financially weak, GME is saddled with its dividend payments. At GME’s current price, the stock yields 11% (which makes it a favorite of some income investors). However, a yield this high isn’t sustainable, and I expect GME to cut the payout sooner rather than later.

Bottom line, I still think the stock is dangerous at its current levels. I recommend avoiding it.

Value Trap #2
Another clear loser is Bed, Bath and Beyond (Nasdaq: BBBY). Just like GME, this stock looks cheap, but it’s also a value trap. While the shares trade at a low P/E of 8, BBBY’s expected growth is negative.

I wouldn’t recommend that investors bet on BBBY’s recovery; it’s a risky stock and, at its current levels, it’s more likely to decline than to rally. Classic value trap behavior.

Value Trap #3
Unlike the two companies discussed above, Best Buy (Nasdaq: BBY) rallied this year — shares are up 15% year to date and 42% year over year. But the stock has probably had its day in the sun.

This electronics retailer is one that had suffered mightily from Amazon’s advance, with sales starting to stagnate as far back as fiscal 2011, followed by an enormous sales plunge of 25% in 2013. No wonder its share-price had plunged as well. But the company managed to execute a successful turnaround, with profits jumping 26% for fiscal 2018 (which ended in January) despite a slow sales year. That’s thanks to re-emphasizing certain services that online retailers have trouble providing, as well as expanding its e-commerce sales and putting a new emphasis on mobile.

It might turn out that Best Buy is one of a few old-school companies that can survive and even prosper at the age of Amazon. But considering BBY’s recent advance, as well as its 150% rally over the past five years, I think investors are likely to take their gains here. After all, BBY competes with Amazon on Amazon’s turf — and that’s still dangerous.

BBY is set to close many of its smaller stores — but its e-commerce success is predicated on having a combined brick-and-mortar/internet model; investors are likely to wait to see whether further cost-cutting is going to benefit the company’s top and bottom line. At this time, I would avoid this stock — and would consider taking some profits off the table if you own it.

P.S. ATTENTION: Bold investors struggling to join the 7-digit club who want to take their portfolio from mediocre to millionaire status. I’d like to introduce you to Fast-Track Millionaire — an investment strategy designed to deliver 1,000% gains and take you from “average investor” to multi-millionaire in 7 years or less. Learn more here…