Why You Should Expect More Volatility 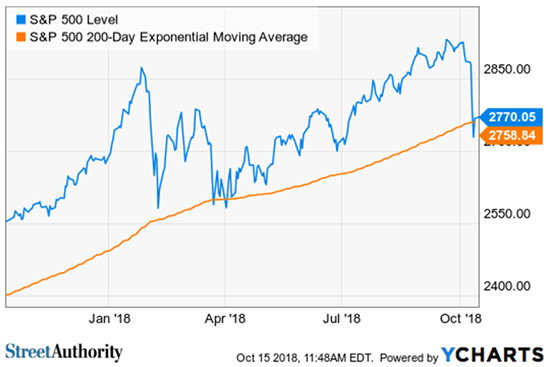 And while the market has bounced a bit as of Monday afternoon, investors are left questioning whether this market can rise above its long-term support one more time, or finally roll over.  To answer that question, investors need to take a step back and look at the macro-view.

About a month ago, the spread between the 10-Year Treasury and the 2-Year Treasury was a meager 18 basis points – uncomfortably close to inverting.  Today, the spread has widened to roughly 30 basis points.  And while the spread is still very narrow by historic standards, a widening yield curve can be seen as a positive development.

Take a look at the 30-year Treasury… 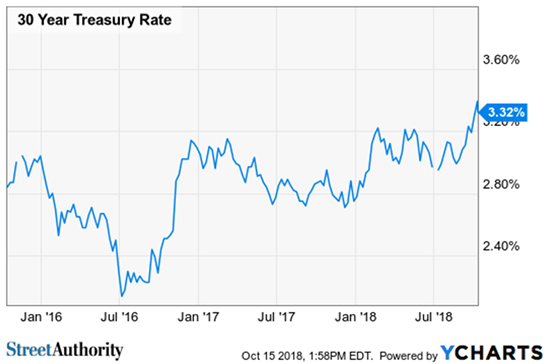 The long bond has broken through resistance at around 3.2%.  And if the long bond fails to return to its previous levels, resistance will become support.  Here, the lack of an unwinding of the largest short trade in bond market history implies that lower rates are unlikely.

This means the long bond is likely to run to 4% and possibly higher.  Of course, the rising 30-year bond will drag the 10-year bond along for the ride – rising above 3.5%.  This will significantly affect GDP growth.  Worse, there’s almost nothing the Fed can do to mitigate rising rates.

A Glut of Bonds
Here’s why.  The speed of the change in yield, or delta, indicates something else is contributing to rising rates – beyond Fed actions.  That something else is a glut of bonds globally.  And it’s driving up rates – and will continue to do so for the foreseeable future as investors demand a higher risk premium.

#-ad_banner-#For evidence, we need only look at the fiscal disaster that is the US government’s finances.  According to the Congressional Budget Office (CBO), the budget deficit through August has ballooned to nearly $900 billion – a 33.2% increase year over year.  The Treasury must issue debt to fund this deficit.

But that’s not the worst of it.  The CBO misleads taxpayers by not including the amount of debt required to fund Social Security, Medicare, and government pensions in their deficit calculations.  Of course, all three of these programs are structurally insolvent – with long-term liabilities in the multiple trillions.

Even so, liabilities for these programs in 2018 alone on a cash basis account for an additional $371 billion of new debt issuance.  On an accrual basis (the basis publicly held companies are required to report), the 2018 federal deficit is an astounding $1.7 trillion – remarkable given the fact that it came at a time of solid economic growth in the US.

Funding this debt will crowd out other bond issuers trying to raise capital – like state and local governments and corporations.  Speaking of corporations, there is more than $10 trillion in corporate bonds maturing in the next five years.  And assuming an 80% rollover rate, that’s another $8 trillion of debt competing for investors’ attention.

Adding fuel to the fire, the Fed is unwinding its own balance sheet at the rate of $50 billion/month.  That just adds additional debt to an already crowded market – and that doesn’t even account for the glut of sovereign debt on a global basis.

What Does This Mean for Stock Investors?
Rising rates make it tougher for GDP to grow at the levels we’ve seen over the past couple of years.  This will affect corporate earnings, and therefore stock prices.  On top of this, higher rates will make it more difficult for companies to buy back their stock – one of their favorite ploys to manipulate stock prices.  This means we are closer to the top of the market than many investors believe.

To mitigate risks to bloated portfolios, investors should transition out of their more aggressive growth stocks in favor of stocks selling at a discount to their intrinsic value – and who can still grow their earnings in an era of lower GDP growth.  And in the meantime, expect much higher volatility.  It’s gonna be a wild ride.

Risks To Consider:  Making predictions about the future is fraught with danger.  Interest rates could just as easily reverse course again and head lower. In that case, my analysis is premature, at best.  But it seems an unlikely outcome.  The bond market is recognizing that something is very wrong, and a correction to chase out malinvestment is in the cards.  It’s a matter of when – not if.

Action To Take:  Investors should start looking to sell growth stocks to lock in their gains.  Some of the proceeds should be left in cash, while some should be used to fund the purchase of value stocks as the market corrects and the economy slows in answer to higher carry costs for governments and businesses.  Look for non-cyclical value stocks that will have the potential to grow earnings despite slower GDP growth.