Why Apple Remains A Buy-And-Hold Stock

There is a world of difference between investors and traders.

In general, investors use fundamental analysis to research and buy stocks at the head of some secular trend. Investors only sell stocks once the investment thesis undergirding that trend is exhausted. And to give a stock the time needed for a thesis to materialize, investors typically hold on to their stocks for years — and even decades.

During this time, investors boost their profits by taking advantage of occasional stock splits and dividend reinvesting, or compounding. Compounding allows investors to purchase additional shares of stock with no further capital outlay. The resulting increase in the number of shares owned from stock splits and compounding significantly lowers an investment’s cost basis over time.

Traders Think Differently
Traders are much more aggressive in generating profits for their portfolios. That’s because they buy and sell securities based on market perceptions gleaned from technical analysis — not in a company’s fundamentals. This type of analysis identifies trading opportunities based on price, volume, and overbought/oversold indicators determined from various charts and graphs.

But the biggest difference between investors and traders is their holding periods. Traders typically hold a position from between a few seconds to several weeks. Traders have no interest in secular trends — or even the business cycle. In many respects, traders are more akin to professional gamblers who place bets on price movements — whether up or down.

That’s why it’s not surprising to find bearish sentiment with traders of Apple Stock (NASDAQ: AAPL). 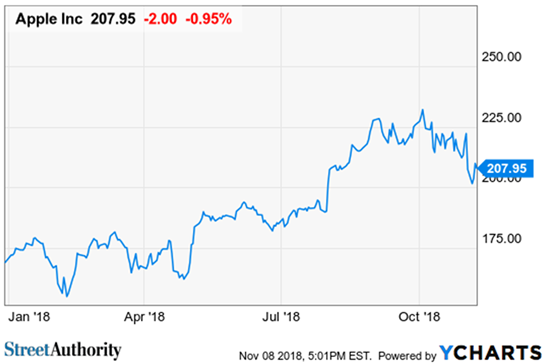 As you can see form the chart above, Apple stock is down more than 10% from its most recent high. This has convinced traders that the stock’s winning streak is over after more than two years of nearly uninterrupted stock gains. In their minds, the Cupertino, Calif.-based company has finally fallen out of favor with investors.

Nothing could be further from the truth. Pessimism in the stock is overblown and based on the most flimsy of evidence. First, traders homed in on company guidance, which forecasts revenue of $89 – $93 billion. The company also forecasts gross margins at 38 – 38.5%. And while the numbers are disappointing for traders, they, in no way, change the investment thesis for investors.

Is Apple Slowing?
Despite Apple’s guidance, the company’s latest quarter was phenomenal. The company posted quarterly revenue of $62.9 billion and quarterly earnings of $2.91. The revenue increase represented a 20% gain over the same quarter in 2017 and a 41% rise in earnings.

#-ad_banner-#For the fiscal year that ended in September, the results are just as stellar. Sales grew by 16% to $266 billion while net income grew to $59.5 billion – a 23% increase. Earnings per share also grew at an impressive 30% rate. Interestingly, if Apple were a country, just its 2018 net income eclipses the GDP of 116 out of 190 countries on earth.

Still, traders remain unfazed at these incredible results. Instead, they continue to see the glass as half empty with no further access to a spigot. So why are traders so pessimistic about Apple stock?

In a word, fear. Traders misconstrue Apple’s recent announcement to stop reporting per unit hardware sales as the first indication of a company in slow decline. While it is true that iPhone sales are slowing, that’s expected in a maturing market. No sane person would expect any company to be able to sell upwards of 200 million cellphones annually forever. At some point, replacement times will have to expand — and that’s what’s happening with Apple.

But it’s also important to understand that average iPhones prices increased by 17.4% in 2018 — to $765.65 per phone. Indeed, iPhone sales are slowing, but the average price of Apple offerings is actually increasing. That’s strong evidence for continued bullishness in Apple shares — but it’s not the only one.

Strong Secular Trend
Traders’ myopia keeps them from seeing the bigger picture. Apple is quietly in the lead of one of the strongest secular trends in the American economy — the move to subscription services. But they did it in a way where the company benefits from supplying the hardware for the services — as well as the content itself. And this is no insignificant trend. It’s the strongest trend in the American economy today — and will be for years to come.

The results are already starting to show in Apple’s financials. Apple’s revenue for its subscription services like Apple Music and iCloud storage reached an all-time high of $10 billion in 4Q2018. This is a 27% increase over the $7.9 billion generated in 4Q2017.

And this is the greatest reason to ignore the short-sighted pessimism of stock traders and be long this incredible stock.

Risks To Consider: A weaker macro-economic environment, especially, in emerging markets like China, could deliver softer consumer confidence in the near term. On top of that, a stronger U.S. dollar, resulting from a global slowdown, would make iPhones more expensive in foreign currencies and contribute to reduced corporate revenues.

Action To Take: Buy shares up to $220/share. Mitigate risk by applying no more than 5% of your portfolio into shares of AAPL. Shares of Apple at this level are for investors with a medium to long-term time horizon, so expect to hold shares for five (5) years or longer using a buy and hold strategy. Use a 25% trailing stop on your position.