Dividends From Overseas? It’s Easier Than You Think…

It’s a well-known fact that U.S. companies (as measured by the S&P 500) offer a mediocre average dividend yield of around 2%. But if you cast the fishing net a bit wider, you can land much larger payouts overseas. Average dividend yields are currently running 3.3% in Germany, for example. You can get 4.3% in Spain, and 4.6% in both Australia and Sweden.

That’s more than double the S&P, without having to stray into riskier emerging markets.

Unfortunately, many investors shy away from foreign stocks. Considering the U.S. only accounts for about half of the world’s market capitalization, that’s like going to the grocery store and only shopping in the even-numbered aisles — you’re missing out on half of what’s out there.

#-ad_banner-#Some of the trepidation comes from the fact that investing directly on foreign exchanges isn’t always easy. Not every brokerage is able to place buy and sell orders in Tokyo or Sydney or Johannesburg. And even then, foreign currency exchange can be problematic, and commissions cost prohibitive. Fortunately, there is a much easier way to invest in some of the world’s largest and most profitable businesses.

Essentially, these are negotiable certificates issued by a qualified U.S. bank that represent ownership in a specific number of foreign shares. An investment bank such as UBS (NYSE: UBS) buys the real shares, puts them in a depository bank, such as BNY Mellon (NYSE: BK), which then issues depository receipts on them.

Sometimes this is done on a 1-1 basis. Other times, a single ADR might represent ownership in 2 shares, or 5, or another ratio that keeps the ADR share price from being too high or too low.

Let’s use an example from my own High-Yield Investing portfolio. U.K. pharmaceutical firm GlaxoSmithKline sells for around 1560 pence in London, which equates to around $20. But peers such as Pfizer (NYSE: PFE) are trading in the $40 range, so one ADR of GlaxoSmithKline (NYSE: GSK) at $40.68 has been set to equal two ordinary London shares.

These ADRs trade on the New York Stock Exchange, settle in U.S. dollars, and also pay dividends in U.S. dollars. (Shares also yield north of 5%, which is one of the reasons I own it.)

There are more than 2,000 of these securities that give U.S. investors access to a wide array of companies, from banks to telecoms to oil producers. While some can be bought and sold on the NYSE, most ADRs trade over-the-counter. (Their tickers commonly end in Y or F).

Different Tiers
There are different tiers of ADRs. Level I shares are usually thinly-traded and involve the least stringent compliance. Analyzing a business is difficult enough without worrying about different accounting standards and lack of timely financial reports. By contrast, Level II and Level III securities must be in full compliance with U.S.-based GAAP accounting standards and other filing rules and regulations. These stocks typically trade on the NYSE or Nasdaq. (The only difference between Level II and III is that the latter can raise capital through public offerings.)

As you might expect, there are far fewer ADRs that meet these additional requirements, narrowing the initial pool down to several hundred. The largest of these can all be found in the Invesco BLDRS Developed Markets ADR Index Fund (NYSE: ADRD), which tracks the performance of 100 large-cap ADRs pulled from developed markets around the world.

Incidentally, these stocks are less expensive than the S&P 500 (average P/E of 13.7) and offer more generous yields of 3.5% on average.

(Note: Be aware that some countries impose tax withholding on dividend distributions. Falling foreign currencies relative to the dollar can also negatively impact the value of some ADRs, but the reverse is also true.)

Today’s Screen
For today’s screen, I limited my search to Level II and Level III ADRs with dividend yields from 5% to as high as 10%. From there, I looked for contenders with projected long-term earnings growth of at least 7% annually to support future dividend growth. Finally, I eliminated ADRs that only make annual payments and limited my search to those with more frequent distributions.

Here are some notable stocks that made the cut. 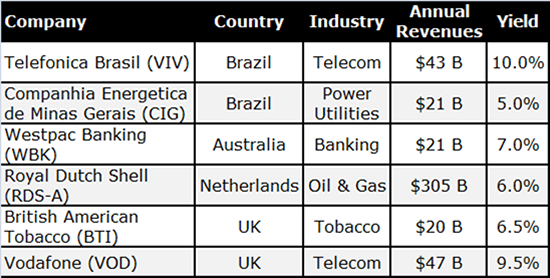 As always, the stocks in the table above haven’t been fully researched and shouldn’t necessarily be considered portfolio recommendations. This screen is simply meant to uncover potential candidates that meet a specific set of criteria. You’re welcome to do your own research on the stocks in this list, but as always, if I find a real gem within these screens, my High-Yield Investing subscribers will be the first to hear about it.

The Standout Favorite
That said… There are several interesting names here, but the recent slide from the mid-$20s to the upper-teens has put Westpac (NYSE: WBK) on my radar. This is the oldest financial institution in Australia, an oligopolistic market where four dominant banks control 90% of all lending activity. Westpac serves over 13 million consumer and commercial customers through a wide range of banking and wealth management operations.

While Australia has a fundamentally sound economy with benign inflation, there have been some concerns about a softening housing market and a mild slowdown in business spending. Management noted these headwinds after reporting flat full-year earnings earlier this month.

Still, this wide-moat lender has great credit quality, particularly in the mortgage loan department, where delinquencies are low — in fact, 70% of borrowers are paying ahead of schedule. Net interest margins have also ticked up a few basis points. And the Aussie dollar is a stable, hard currency backed by a treasure trove of coal, iron ore and other natural resources.

Westpac just reported full-year earnings of $2.36 per ordinary share, in line with last year’s profits. And management is distributing about 80% of its net income to investors. Semi-annual dividends have been set at $0.94 per share and disbursed in July and December.

At current exchange rates, that equates to $1.37 per ADR annually (each ADR represents one share), which puts the yield at just over 7%. I think the shares are also poised to rebound back above $20, giving investors potential market-beating total returns over the next 12 months.

Want More Picks Like This?
If you’re hunting for income, it clearly pays to expand your search horizons. That’s why we’re constantly looking beyond the usual suspects in my premium newsletter, High-Yield Investing. If you’d like to join us in our search for the best high yields the market has to offer, then I want to invite you to learn more here.