Is A Recession Coming? Here’s How To Survive…

December alone saw its worst performance since the Great Depression — the S&P 500 ended with a 9.2% loss. And while the major blue-chip indexes — S&P 500 and Dow Jones Industrial Average — have yet to enter official bear-market territory, the same can’t be true for other indexes.

The Wilshire 5000 dropped below the 20% bear-market threshold in December, as did the Nasdaq, Russell 2000, and the Dow Jones Transportation Average. 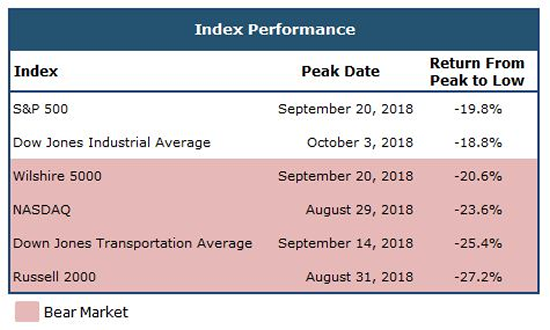 Now the question on everybody’s mind is… are we going into a recession?

The Important Thing To Remember About Recessions…
Here’s the thing about recessions, we don’t know when recessions start, or end, until well after the fact. The textbook definition of a recession is “a period of falling economic activity spread across the economy, lasting more than a few months, normally visible in real GDP, real income, employment, industrial production and wholesale-retail sales” usually over a period of at least two quarters.

In other words, it will likely be at least 12 months before a recession is officially declared. That means by the time it’s announced the worst of the recession is likely already behind us.

Instead, consider the recession we saw in the early 1990s, which officially started in July 1990 and ended in March 1991. I’d bet most people barely noticed. But the set-up is eerily similar in terms of stock market performance and GDP growth.

After the recession ended in March 1991, the market — and economy — soared for the next nine years. The era was dubbed the roaring 90s. 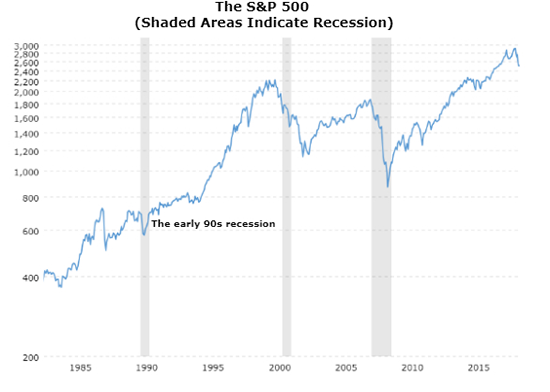 Could the next recession be similar to what we witnessed in the early 90s? Only time will tell…

But I point this out because, for every fear-wrenching example that relates the next recession to the financial crisis in 2008-2009, there are other more optimistic examples, like the one in the early 90s. But you won’t hear them talked about much. Fear gets more clicks than positive news.

The bottom line is that we don’t know what’s going to happen. We don’t know when a recession will strike, if the market will continue to fall, or if it will turn around and begin another triple-digit ascent.

Here’s What Really Matters
Look, here’s all you need to know…

The S&P 500 has done very well over the past quarter century — to the tune of a 600% return since 1990. That even covers a period with two of the most devastating bear markets in our lifetimes.

Remember that recessions — like market corrections — are a part of the economic cycle. They are going to happen — it’s just a matter of how you handle them. Some investors will fold and run for cover. But successful investors will see any downturn as an opportunity. An opportunity to buy some wonderful companies at great prices.

Now, if you’re overly concerned about your account at the moment, it means you may have too much exposure to equities. If that’s the case, then look at cutting some losers, and taking some profits off the table. Enough to get down to a position where you’re not losing sleep over the daily market swings.

At Top Stock Advisor, our investment timeframe is much longer than one day, one week, or one month. Getting caught up in the daily market chatter can not only make your blood pressure rise, but it can lead you to exit a position prematurely.

Instead of thinking about all the “nattering nabobs of negativism,” to quote a phrase from former Vice President Spiro T. Agnew, change your mindset to think about all the opportunities that will become available once this market turmoil is behind us. As Warren Buffett says, “Be fearful when others are greedy, and greedy when others are fearful.”

Investors are becoming fearful, which means there will be incredible opportunities that we can pounce on when the dust settles.

Worry About What You Can Control
So instead of worrying about factors that we can’t control — like whether the market will go up or down tomorrow, or if we’re entering a recession — focus on the ones that we can control. Things like portfolio allocation, position sizing, cutting losers and taking profits off the table to raise cash. Most important, focus on not letting your emotions get the best of you.

As I mentioned, one of the beauties about the market “re-pricing” is that opportunities to invest in wonderful companies become more readily available. To prove my point, consider if you had the foresight to invest in some of our current holdings in Top Stock Advisor when the market began to pull back in 2008… even well before it bottomed in March 2009.

For example, had you bought CME Group (Nasdaq: CME) in July 2008 and endured the shellacking that shares took during the worst bear market since the Great Depression, today you’d be up more than 280%, compared with the S&P 500’s 97% gain over the same period. 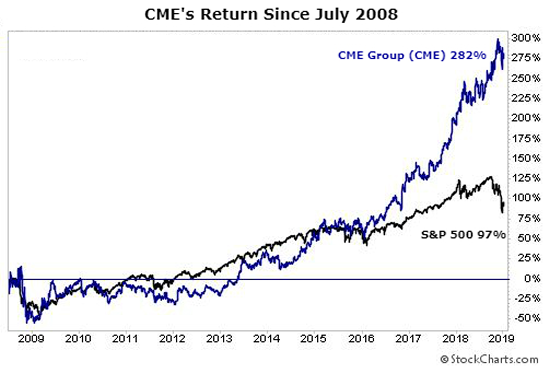 Even a financial firm like American Express (NYSE: AXP), which lost over 80% of its value near the market bottom, you’d still be up 192% today. Starbucks (Nasdaq: SBUX) would have rewarded you with a staggering 836% return since July 2008.

My point is that with great companies you don’t have to get the exact bottom right, but you do have to endure some volatility and maintain a long-term mindset. You also have to be willing to invest when others are afraid. You have to jump at the opportunities you find, even while others hesitate.

Your Best Chance At Success In 2019
That’s what I see with my latest pick in Top Stock Advisor… an opportunity that others might think is foolish. But those same people probably missed out on some of the very best investments that we saw last time the market re-priced.

It’s also what I see with my report of top picks for 2019. Each year, we spend months researching what we think will be the top stocks for the coming year. And over time, we’ve learned that the top picks year after year can be found with a simple set of principles. That’s why we’ve beaten the market again and again, with average gains of 39%.

While nothing is certain, we’re convinced — based on our cumulative decades of experience and expertise — that the picks in this year’s report are your best bet for building wealth in 2019 and beyond. And I’d like to share it, with absolutely no risk to you. Follow this link to learn more.