Want Huge Long-Term Gains? Look For These 5 Barriers To Entry…

In the beginning, the lone supplier of any new disruptive good or service can pretty much name their own price. But once the cash registers begin to overflow, others inevitably take notice. Success invites competition.

Before long, a second player joins the game, and then another follows and then a few more. As they elbow for room, prices always drop to attract or retain customers.

Over time, returns on capital in highly competitive industries will fall down toward the cost of capital. It’s Management 101. The grocery chain Kroger (NYSE: KR) now ekes out a razor-thin profit margin of 1.6%. That means it retains just 1.6 pennies of net income for every dollar of sales. And it’s one of the most efficient in the cutthroat grocery business.

But what if that pie is never divided into tiny slivers? What if the entire dish is served up to two or three lucky recipients? That way, each could feast on a heaping portion that spills over the edges of the plate…

If this sounds appetizing, then you understand why barriers to entry can be so valuable. They scare away potential competitors like a fierce guard dog. Let’s take a look at five of the most common barriers. Once you see an example, you’ll immediately understand what makes them so powerful for companies (and lucrative for investors who own shares)…

1) Regulatory Hurdles:
Some industries require stacks of permits just to get a foot in the door, followed by layers of rules, regulations and oversight. The hassle (and cost) of ongoing compliance scares away potential players.

One textbook example is the credit-ratings agency. Every major corporate borrower in the world must get a credit check, but there are only a small handful of accredited organizations that can issue them.

Cracking into this business isn’t easy. Doing so requires advance certification from the Securities and Exchange Commission (SEC) as a nationally recognized statistical ratings organization (NRSRO). Until recently, there were only five to obtain this designation, including Standard & Poor’s, Moody’s (NYSE: MCO) and Fitch.

In other words, the SEC itself is standing as the guard dog at the gate. With global credit issuance surging over the past decade, Moody’s has delivered a market-crushing total return of more than 1,550% since 2009. 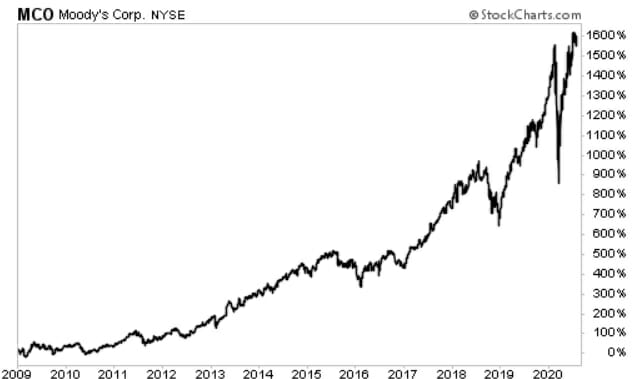 ​2) Concessions and Licenses:
Be on the lookout for situations where a local municipality or other state or federal agency awards an exclusive operating license to a single vendor or contractor.

Here’s one example that comes to mind… Securing “right of way” clearance to build new rail lines is a costly, time-consuming, and politically-charged process. In fact, many believe there will likely never be another rail line built in North America again. That means the eight existing Class I freight haulers will continue to divvy up all the wealth.

I’m a fan of Canadian National Railway (NYSE: CNI), which owns 20,000 miles of track that stretch across the entire continent from Vancouver to Halifax and down to New Orleans.

Then there is Lamar Advertising (NYSE: LAMR), another company benefiting from barriers erected by the government itself. The Highway Beautification Act of 1965 placed strict limits on the installation of new roadside billboards, thus preserving a monopoly in many markets. Lamar owns tens of thousands of billboards along rural highways and busy city intersections. In many places, competition isn’t just discouraged, it’s illegal.

Even trash haulers such as Waste Management (NYSE: WM) are protected by government permits. After all, nobody wants to see a new dump or landfill built in their backyard. Obtaining zoning and environmental approval can be almost impossible — so existing sites are as good as gold.

3) Capital Requirements:
Some lines of work require immense start-up capital and ongoing expenditures. The heavier the cost, the higher the barrier…

It doesn’t take too much to open a pet-grooming facility. But building a state-of-the-art semiconductor manufacturing plant is a whole different ballgame. Same story for nuclear submarines. There are only six shipyards capable of building these vessels on the Navy’s speed-dial, and General Dynamics (NYSE: GD) owns three of them.

4) Specialized Expertise:
Sometimes, the roadblock might simply be a lack of qualified personnel. We see this in industries that require the services of highly-skilled professionals in short supply.

Anybody with a camera and a steady hand can open a photography studio. By contrast, technical consulting firm Exponent (Nasdaq: EXPO) has a staff of more than 600 physicists and engineers that deal with disciplines ranging from biomechanics to epidemiology. These experts (over half of which have Ph.D. degrees) don’t exactly grow on trees.

5) Patents/Intellectual Property:
This last category is self-explanatory. By their very nature, patents allow innovative companies to milk their breakthroughs free of competition for a fixed period.

Pharmaceutical and biotech companies are the most notable beneficiaries. But there are plenty of examples outside the pharmaceutical world…

Take Qualcomm (Nasdaq: QCOM), which has a patent-protected monopoly on the backbone of wireless communication. The industry has undergone innumerable changes since these patents were first issued in the 1990s. But decades later, Qualcomm still rakes in billions each year from licensing and royalty income tied to the sale of 4G-enabled devices. Incidentally, that cash has allowed for nearly a 50% surge in quarterly dividends over the past five years.

Just The Tip Of The Iceberg

Just as in politics, incumbents can be tough to unseat. They already benefit from a well-known brand and established relationships with vendors and customers. Unknown entrants must spend buckets of cash on advertising and marketing just to make a name and start chipping away.

But the less financial incentive for future rivals to throw their hats in the ring, the better. That’s why barriers to entry can be an investor’s best friend. It can be well worth your while to seek them out.

Editor’s Note: If you’re hunting for income, then it pays to look beyond the usual suspects…

That’s what Nathan and his subscribers do each month over at High-Yield Investing. In fact, many of his subscribers are earning thousands in extra income each month — enough to live a comfortable, worry-free retirement. If you’d like to hear more from Nathan and learn more about his service, go here now.