Long ago, someone posed a question that ended up revolutionizing mathematics.

The question: “If we start with one pair of rabbits, how many pairs of rabbits will there be one year later if we assume that every month each pair reproduces and adds a new pair to the group?”

This is a demonstration of a number sequence known as the Fibonacci series. It was identified by mathematician Leonardo Fibonacci, and has been written about since the 13th century. They are widely used by traders in the 21st century — particularly Fibonacci ratios.

What Are Fibonacci Numbers? And How Traders Use Them…

Three ratios are commonly associated with this series:

Still with us? The important thing go know is that traders believe these ratios are often found in price data. Fibonacci ratios are applied to individual stocks and futures contracts, as well as indices, and can be used in any time frame.

The most common Fibonacci ratios to remember are 61.8% and 38.2%. After a sharp advance or decline, technicians will apply these numbers to determine resistance/support levels.

Here’s an example of how the Fibonacci ratios are applied.

After a significant price decline, traders generally look for at least a short rebound in price. And many traders will expect the price rise to stop, at least temporarily, at a Fibonacci ratio related to the decline. The Fibonacci ratio may also prove to be a long-term resistance level. This is shown in the chart of the Nasdaq 100 index below. 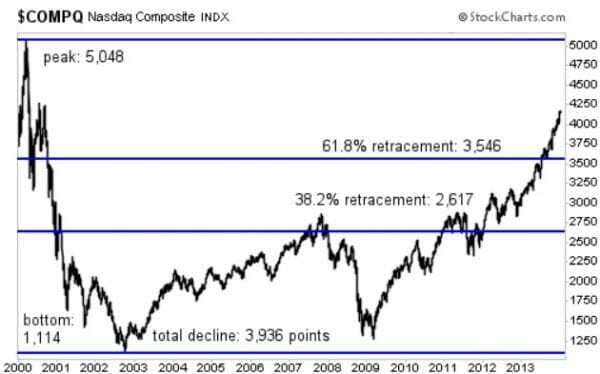 After the Nasdaq 100 crashed in 2000, the 38.2% Fibonacci ratio served as resistance. Prices did not advance past this level for another 12 years. The 38.2% level was finally broken decisively in the spring of 2012. Traders then looked at the 61.8% retracement as the next resistance level. The market moved easily through that level in 2013, and then served as support.

Why Fibonacci Ratios Matter To Traders

Fibonacci ratios are also used to define upside price targets and support levels. They can also help identify times when a stock or index is likely to turn.

No one knows why, but Fibonacci ratios seem to work in many markets. Traders are often aware of them on long-term and short-term charts. For example, they may become cautious as prices approach a Fibonacci ratio that is likely to be resistance.

Once the resistance level is broken, traders may become more bullish. Quick gains are often seen when prices break above a significant ratio. Traders will sometimes become more aggressive at a Fibonacci support level, since they expect prices to bounce higher from that price.

P.S. Looking for picks that pay generous dividends while allowing you to to sleep at night? Then you need to see this...

Our colleague Nathan Slaughter has identified 5 safe, high-yield stocks that allow you to keep it simple. Each one has proven to hold up well in any market — providing some of the best long-term returns in the market and paying increasing dividends every single year.

You can forget about meme stocks, volatile cryptocurrencies, and complicated trading strategies… With picks like this in your portfolio, you may never have to worry about what the market is doing again…