This Indicator Is Telling Me It’s Time To Buy…

The bull market is back at full strength…

Back in November of last year, I talked extensively about a market breadth indicator called the advance-decline line (AD line) — a technical-analysis tool that charts the number of advancing stocks minus the number of declining stocks. This indicator is a telling sign of what’s going on beneath the surface.

For instance, if the market is hitting new highs, you would look at this indicator to make sure it, too, was advancing and hitting new highs. This would show strong participation in the market and confirm the bullish trend. However, if the AD line fails to keep pace with the underlying index, this is a sign of weakness in the market, signaling a bearish divergence.

In my original discussion, I pointed out that the AD line revealed a bearish divergence in late September. A week later, the market selloff began and didn’t let up until December 24.

I touched on this indicator once again in late January, along with another one — the Coppock Curve. These two indicators, along with my Maximum Profit system, were showing bullish characteristics.

We took those bullish signals and loaded up on stocks… and we’ve been nicely rewarded. The market is up more than 4.5% in the three weeks since that late January issue, and the four stocks we added at that time are all doing even better, with each outpacing the broader market. Combined they are up an average 11.7%.

Just last week the AD line reached new all-time highs, which tells me that the bull market is officially back. The last time we saw the AD line race out and hit new highs before the underlying index — the NYSE Composite Index in this case — the market followed suit shortly after. 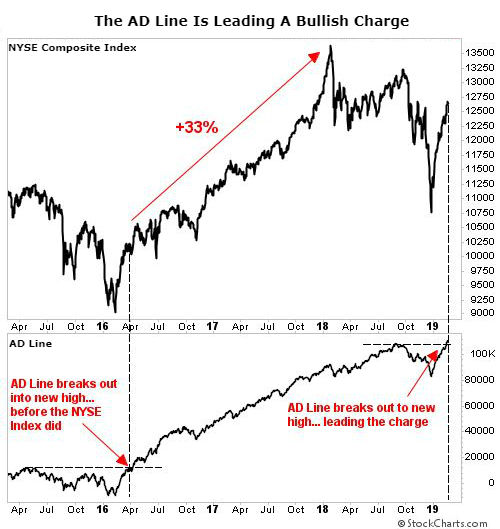 ​It seems that investors are ready to put the miserable fourth quarter behind them and begin buying stocks again. Fortunately, we’ve been one step ahead with our Maximum Profit system, and the flagged four new buys last week to further take advantage of the renewed bull market.

It’s not too late to take advantage of these bullish trends, but there are a few things to keep in mind…

Even in the face of several bullish indicators, though, there still are a couple of wild cards we need to watch. Namely, the trade war with China, and the Fed’s stance on interest rates. The Fed has been accommodative recently, but it could quickly change its tune as this bull market begins to pick up steam. As for the trade negotiations with China, as I write it is looking as if genuine progress is being made toward a broad agreement. But that, too, could turn on a dime.

P.S. What if I told you that there’s a stock market “hack” that could change the way you invest forever? Best of all, it’s totally legal — and it actually works. We’ve been using it with a few hundred “in the know” investors for years, making quick gains in just a short amount of time. To discover how it all works, go here now…