As we’ve covered before, Fibonacci ratios are widely used to develop price targets for retracements on countertrend moves. A Fibonacci retracement will help spot support levels in an uptrend or resistance in a downtrend.

Fibonacci extensions apply the same idea to price moves that are in the direction of the primary trend. They can be useful to identify targets for price advances in an uptrend and downside targets in a downtrend.

As a brief recap, these numbers were first identified by mathematician Leonardo Fibonacci, and have been written about since the 13th century. They are widely used by traders in the 21st century — particularly as Fibonacci ratios.

How Traders Use Fibonacci Extensions

The initial price move is used to find the target for ConocoPhillips (NYSE: COP) in the chart below. The usual Fibonacci retracement levels are shown below with an extension target added. 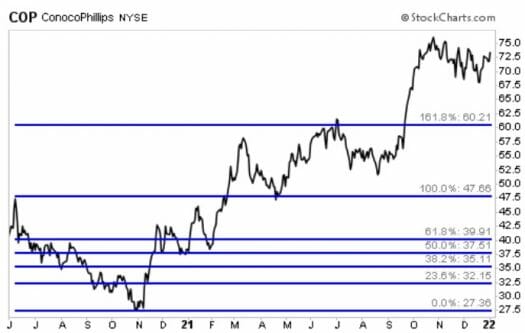 Your charting software may produce extensions in the same way as retracements, so we’ve only included the 1.618 (expressed as 161.8%) in the chart above. But you can see in the example that this level did serve as a reliable target for the rally in COP following the breakdown. Once the price dropped below the target, however, that Fibonacci extension level became resistance before breaking through that resistance later on. Important price levels that serve as resistance often become support at a later time on price charts, just as support often becomes resistance once it is broken.

This same general idea could be applied to long-term targets by using the 2.618 ratio.

Why Fibonacci Extensions Matter To Traders

While traders often use Fibonacci ratios to identify retracements, they are also very useful in finding price targets when applied as an extension to the price trend. They are particularly useful when there may be no discernable pattern on an emerging breakout, where traders are left with few tools to determine the trend or price target.

Still, as we’ve noted with previous discussions of Fibonacci ratios, it’s usually best to test multiple tools and approaches. This also applies to many indicators and technical patterns.

As we have noted a few times before, there’s no real basis for why Fibonacci ratios should work. But markets seem to respect them, and thus, they are worth your attention as a trader. Knowing the key levels can help traders understand the long-term trend, spot potential short-term moves against that trend, and establish price targets.

P.S. An ignored satellite company just closed a genius-level deal that could generate a massive return. Because Wall Street analysts overlooked a critical detail, you have a golden opportunity to load up on stock at a discount and pocket a major win. But only if you take these exact steps before it’s too late… Click here for detailed instructions.