How “Ranking” Stocks Can Lead To Market-Beating Returns…

Within a group of different stocks, mutual funds, or any other investments, some will perform better than others.

Relative strength (RS) recognizes those differences in performance. In short, it’s a way to rank investments from the strongest (best performers) to the weakest (poor performers).

Long-term investors can think of the stock market as a marathon race. Marathon runners cover more than 26 miles. If given the chance to bet on the eventual winner, most people would bet on one of the front-runners. This makes sense, since there is little chance that someone three miles from the finish line at that point could be the winner. The front-runners have put in a strong performance and are likely to continue outperforming.

How Traders Use Relative Strength

Traders often prefer to buy strong stocks and sell weak stocks. Relative strength is one of the best ways to do that.

Traders calculate relative strength as the rate of change (RoC) or with a number of other indicators. It’s always calculated for a group of investments, comparing the performance of a particular investment to all others. This is different from the Relative Strength Index (RSI), which traders calculate for an individual security.

Some traders will only buy stocks that are performing better than the market. The price relative indicator is one way to identify relative strength, using the performance of one stock compared to an index. This is found by simply dividing the price of the security by the index. (The S&P 500 and DJIA are both price-weighted.)

You can see this in action in the one-year chart of Starbucks (Nasdaq: SBUX) below. 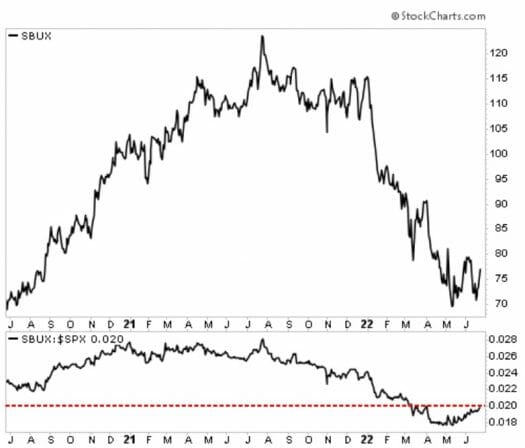 The bottom panel shows price relative. When the indicator crosses below the red dotted line, SBUX is underperforming the S&P.

Another way to calculate relative strength is by using all publicly traded stocks and ranking each stock relative to the rest. This is our preferred method, and it’s the one used by our colleague Jimmy Butts in his premium advisory, Maximum Profit.

In Jimmy’s system, stocks are ranked over the past six months. The strongest stock has a rank of 100 and the weakest is 0.

Soda maker Monster Beverage Corp. (Nasdaq: MNST), formerly known as Hansen’s Natural, has been one of the biggest stock market winners in history. On of its strongest runs was between 2003 and 2011, where it gained more than 18,000%. Traders could have captured nearly all of the gains (avoiding sharp drawdowns) by only owning the stock when the relative strength rank was above 50. 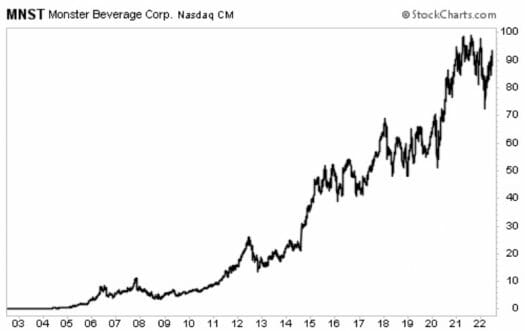 Why Relative Strength Matters To Traders

A number of academic studies show that relative strength strategies deliver market-beating returns. Many successful strategies include relative strength as part of the selection process. Examples include the CAN SLIM methodology popularized by Investor’s Business Daily and the Timeliness Ranking System included in the Value Line Investment Survey.

Relative strength can be a complete trading strategy for professionals and individual traders alike. Individuals could actively manage their 401(k) accounts by calculating the six-month rate of change for each available investment once a month and investing in only the highest ranked stocks. Over the long term, this could lead to market-beating results and a more financially secure retirement.

P.S. Dr. Stephen Leeb and his team have discovered a little-known Executive Order that could make the United States one of the world’s largest producers of a coveted resource…

This story has gone completely unreported in the mainstream media. That means investors have a rare chance to get in on the ground floor, offering a chance to lock in life-changing gains before the crowd catches on.