Forget “Buy Low Sell High”. This Is Much Better…

A couple of years ago, I heard an interesting take on investing. This so-called “expert” said something along the lines of “never buy [a stock] after a new high, and never sell after it plunges.”

In fact, I’d argue that if investors did the exact opposite of this — that is, buy when a stock is making new highs and sell after it tanks — they would achieve far better results in their portfolio. And there’s a plethora of studies to support this…

But here’s the thing… you’re not going to convince the average investor to buy a stock after it hits a new 52-week high. They’d likely try to convince you to sell and book your profits. That’s because this notion of buying a stock at new highs goes against nearly every fiber in our body. It’s been ingrained in our psyche that we need to “buy low and sell high.” Investing, however, isn’t that simple.

For most, buying a stock at a 52-week high is like standing in the middle of a jungle. With machete in hand, and you are now required to pave a new path. It can be scary because you’re not sure if the path you’re about to pave is the correct one, or if it’s headed toward a cliff, or if you’ll end up in the promised land.

It’s much easier to “see” the path from the 52-week low. That’s because you want to believe that path is headed back toward the 52-week high. But that’s not always the case, and if does happen it could be a tough, long, winding trail back to the top.

Take it from me…

Let me show you what I mean with a personal trade back when I was more of “buy-and-hold” investor. Like many, I thought that buying near a 52-week low was the smart thing to do. It just seemed more “value-like.” Plus, I could see the path back to the 52-week high, which in my head was going to score me a quick 50% gain… 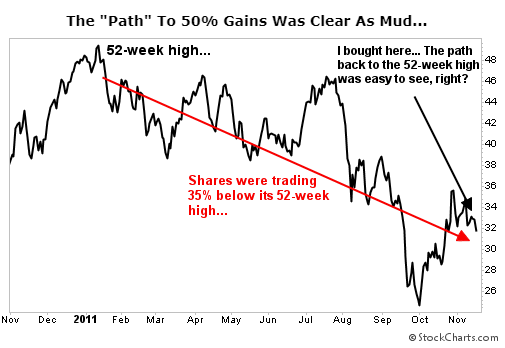 I bought shares when they were trading about 35% off their recent 52-week high. Six months later they were in a slide. I was down 17%. Then the shares clawed their way back above my purchase price. As I was reflecting on the path back toward that 52-week high… shares tumbled more than 26%. 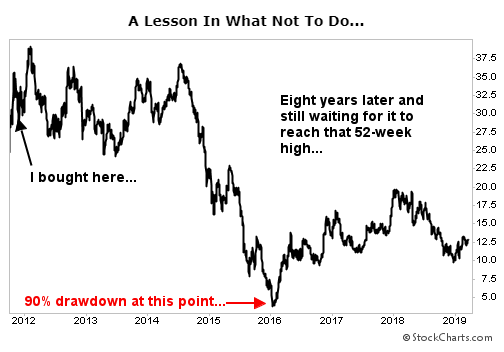 But never sell after a stock tumbles, right? Wrong. Had I been using the Maximum Profit system back then, I would have cut my losses and moved on. But I wasn’t, and I didn’t.

Eight years later, my the stock was down 90% at one point. That means in order to just get back to my original investment, I needed to book a gain of 1,000%. That’s no easy task.

Now, it’s hard to admit that I let myself get into that position. But it was years ago, and it was an expensive lesson. My goal is to keep you from having to go through the same thing.

My publisher doesn’t want me to share stories like this. Sure, I could tell you about my successful trades, how I’ve booked triple-digits with this stock or that stock. Or how, literally this week, I sent an alert to readers about how one of our holdings — the TV streaming company Roku (Nasdaq: ROKU) — made new highs again long after we bought in at a previous high.

And guess what… I bought because it had great momentum and we’re up more 50% in just a few months.

But enough of that. I would rather tell you about my failures so you can learn from them.

I want you to make money. I want you to be successful at trading. And in order to do that, you also must understand that you’re going to make mistakes. Not every investment will be a winner. That’s okay… as long as you don’t let it turn into a giant loser. Cutting a loser short is a victory — a victory against a larger loss.

Long-time Maximum Profit readers know that I talk a tremendous amount about risk and risk management. That’s because if you blow up your account, you won’t have the opportunity to take advantage of the next trade. As the saying goes, live to fight another day.

P.S. There’s never been a better time to join the ranks of successful traders over at Maximum Profit…

That’s because I just released a report about the incredible promise of 5G technology — and how we’re going to use our proven system to make a killing off of it in 2021 (and beyond).

If you’ve seen the news lately, then you know 5G is going to be huge. But to have the best chance of knowing which 5G stocks to get in (and when), you’re going to need a winning system at your disposal, delivering timely buy and sell signals.