Candlestick charts are one of the oldest forms of technical analysis in existence and are still used by many modern, sophisticated traders today.

Candlestick patterns can be traced back to the practice of Japanese traders using technical analysis to trade rice futures in the 1700s. It is believed that candlestick patterns as we would recognize them today were developed over many years and appeared sometime around 1850.

Candlestick patterns were introduced to traders outside of Japan in 1991, when “Japanese Candlestick Charting Techniques” was published by Steve Nison. This charting technique immediately gained widespread acceptance among traders. Let’s examine what they are and how they can help traders identify patterns to profit…

What Are Candlesticks? And How Do Traders Use Them?

Candlestick charts are available on many websites and can be found in every major trading software package. Candlesticks offer more information at a glance than traditional bar charts. Experienced traders can quickly spot patterns, as many are formed with only one to three bars. They can be applied to any market and over any time frame.

To draw a candlestick, the opening and closing prices create a rectangle that forms the body of the candlestick. Lines above and below the body are the wicks, which incorporate the high and the low prices. The body is usually filled in when the close is lower than the open. This signifies that price action in the time period was heavy and pulled down by the weight of the selling. The white body of an up close can be thought of as prices floating higher. This is shown with a lighter candlestick.

These visual cues help the trader quickly assess the market condition. Below is a sampling of some of the simple candlesticks you may see on a chart. Each of these patterns has a distinct name, and can immediately tell traders whether the price action is bullish, bearish, or neutral…

Other visual cues are gained from the size of the body and the wicks. High volatility periods show larger candles. Strong trends will have a number of candlesticks with large bodies on the chart. And small-bodied candlesticks often highlight market turning points. This is seen in the chart below. 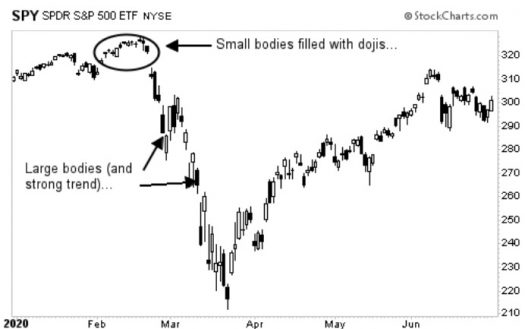 Traders can spot a number of patterns using candlestick charts to identify times when the trend of the market is likely to change. One of the simplest patterns is the doji. This forms when the body is very small, indicating the open and close were very close to each other and the price was almost unchanged.

Traders believe dojis represent a period of indecision in the market. The proverbial battle between the bulls and bears has resulted in a draw without a clear winner. These times usually don’t last long. This means a doji often signals a large price move is coming.

There are dozens of other candlestick patterns identified by traders. Many software programs and websites can scan for patterns and help traders find possible buys and sells.

Why Candlestick Charts Matter To Traders

Many traders use candlesticks to decide when to buy and sell. This requires either a great deal of study in order to identify the patterns or software to highlight them.

Candlesticks are also often combined with traditional indicators. For example, a pattern showing oversold momentum with a doji near a four-week low in price would signal a buy. Other traders use them as a signal for possible large moves. Traders spotting a series of candles with small bodies could expect a trend reversal, for example.

P.S. Our colleague Nathan Slaughter is predicting a “feeding frenzy” of M&A deals over the next few months. And that could lead to a fortune for investors who find themselves at the right place at the right time…

To help our readers sift through the rumors and position themselves to profit, he’s produced a brand-new research report dedicated to this new tidal wave of deals, focusing on three key sectors…

Remember, Nathan and his team have already closed out multiple triple-digit winners in the past two years. But that could be nothing compared to what we’re about to see… but only if you act before it’s too late.