Is This The First Medical Marijuana Blue Chip Stock?

For centuries, humans relied on plant-derived medicines, using — based on countless experiments and astute observation — a wide range of chemically-active elements obtained from a wide variety of plants to treat many, if not most, ailments and diseases. A more systematic study of what it is that makes certain plants medically potent had only begun in the 19th century, however, thanks to the advances in chemistry and biology.

Today, the entire field of ethnopharmacology — the study of the use of plant-based or other naturally derived medicines across different cultures — has emerged. So have the related fields of ethnomedicine, medical anthropology — not to mention food science or good old-fashioned botany — and more. The potential of plants to deliver life-changing medication has long been one of the arguments for biodiversity.

It should not come as a surprise that scientists, in research labs and in the biotech industry, have also been studying cannabis with a belief that, thanks to the chemicals in the plant, it’s much more than just a popular recreational drug.

One such company is a pioneer in this research and the owner of the very first prescription medication derived directly from the cannabis plant.

London-based GW Pharmaceuticals (Nasdaq: GWPH) was founded in 1998. Since then, GW not only has been researching cannabinoids for their hidden potential and medicinal powers but has also been educating the public about the plant’s potential benefits.

GWPH has a strong first-mover advantage over the competition with its 20-year history, deep knowledge, two already-approved medications and a strong pipeline of future drugs. Armed with in-house regulatory expertise and a slew of patents and patent applications, GWPH is not to be overlooked as a growth story on its own — not to mention as one of the major beneficiaries of the move to legalize marijuana. This company belongs to that rare breed of stocks for which there isn’t a good and ready substitute.

It also sits in the middle of two high-growth areas (biotech and cannabis) — exactly what we are looking for over at my Fast-Track Millionaire premium newsletter.

#-ad_banner-#First, GW made history with the first U.S. Food and Drug Administration (FDA)-approved medication that is directly derived from the cannabis plant. Approved for Dravet syndrome, a rare and severe form of epilepsy, and the first drug to treat Lennox-Gastaut syndrome (a variation of epilepsy) since 2011, Epidiolex has the distinction of being the first in what is likely to be a long line of cannabis-based FDA approved drugs.

It’s also the first in a new class of anti-epileptic drugs. Epidiolex was launched in the United States on Nov. 1, 2018. It’s important to remember that these two syndromes — Lennox-Gastaut and Dravet Syndrome — are rare but severe. They start early in childhood (“early-onset”) and are drug-resistant. The patient response, therefore, has been extremely positive.

And here’s another achievement: Epidiolex was developed in just over four years, from Investigational New Drug (IND) application (with IND, a pharmaceutical company receives permission to start human clinical trials) to FDA approval. That’s a fraction of the time it normally takes for development and approval. Also, while it’s officially a controlled substance, it’s deemed to be a so-called Schedule 5 — which is the lowest restrictive schedule under the Controlled Substances Act.

Annual sales of Epidiolex could generate as much as $800 million in revenue by 2025.

Approximately 4,500 new patients and over 500 physicians were already using or prescribing Epidiolex at year-end 2018. Moreover, GWPH said that its filled-prescription growth in January showed an approximate 150% increase over December 2018. This is a very encouraging trend for the new drug, and it also bodes well for other cannabinoid-based medications GWPH has in its pipeline.

Far from a one-trick pony, GWPH already has another approved drug called Sativex. If this medicine, which is used to treat spasticity from multiple sclerosis and has been approved in 25 countries, is also OK’d in the United States, annual sales could bring as much as $100-$150 million to GWPH’s coffers.

The graph below shows how deep a pipeline of future products GWPH has. Most of its research efforts focus on neurological conditions. 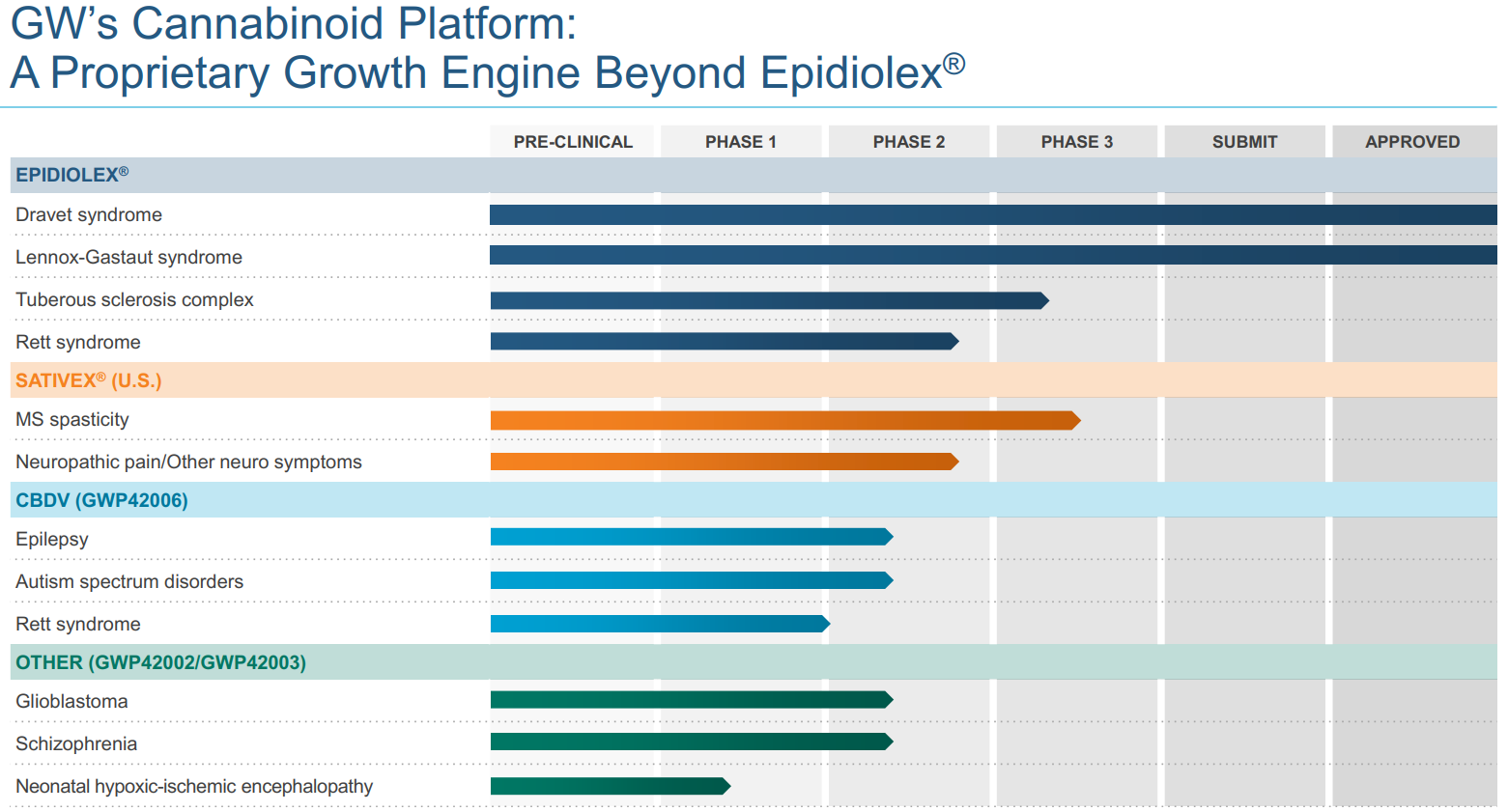 GWPH has been making medicines based on cannabinoids or researching such medicines since 2005, and it has developed a manufacturing process that should allow the company not only to grow Epidiolex according to the demand for the medicine but also manufacture future medications (drugs that are still in a pipeline stage) at this time.

In early October 2018, GWPH raised about $324 million in an IPO of its U.S.-listed shares (ADRs). Thanks to this financing, the company has strengthened the balance sheet and now has enough money to invest in product launches, manufacturing capacity expansion, and to grow the pipeline of future products.

Action To Take
Say whatever you want about recreational cannabis, but the potential benefits to be had from the medical side are simply too good to pass up.

GWPH is easily one of the most exciting stocks we hold in the Fast-Track Millionaire portfolio. We’re already up by about 27% since adding it to the portfolio on January 16, and I expect we’ll see even more gains to come, which is why I continue to rate it as a “Buy.”

P.S. Every year, 600,000 people die of cancer in America. 1.2 million have a heart attack. 30 million are walking around with diabetes. But with the Personalized Medicine revolution, that’s all about to change… Genetic editing and host of other exciting developments is bringing us to the doorstep of a colossal jump in our lifespans. Over the next decade, survival rates will soar for dozens of diseases. It’s coming around the corner — and faster than you know…

There are a few companies working in this area that stand to deliver massive returns for investors. But the most promising of all may be a company with first-mover advantage… To learn more, go here now.