How Cycles Can Help You Time The Market

Some traders believe the market moves in cycles, with price action unfolding in rhythmic patterns.

One example of a cycle in nature is the amount of time in a day. The Earth completes a full rotation on its axis every 24 hours, following a cyclical pattern. An accurate forecast of daylight can be developed from this cycle. Traders have identified similar recurring cycles in the stock market.

A perfect cycle can be defined by a sine wave. In the markets, a cycle unfolds as prices rise and fall largely synchronized with the calendar. Traders have identified cycles lasting 40 days, 13 weeks, and 52 weeks. These cycles change over time and are only approximate.

How Traders Use Cycles

Traders use cycles as an approximate guide to market timing. With a cycle, the trader can identify the probable turn date for a market in advance.

Traders use various techniques to identify market cycles. The simplest approach is visual, such as noticing that stock market lows often occur in October. Traders mark lows each October and expect highs halfway through the cycle in April. More sophisticated mathematical techniques include the Fourier transform and more precisely define cycles.

Cycles are described by their phase (the amount of time since the last bottom), amplitude (the size of the move from high to low), and frequency (the time between two consecutive bottoms or consecutive tops).

For example, the chart below shows weekly prices of SPDR Dow Jones Industrial Average (NYSE: DIA) ETF from 1998 through 2012. A 52-week cycle with a bottom in October has been added to the chart. Some of the cycle lows are seen very close to bottoms in price. 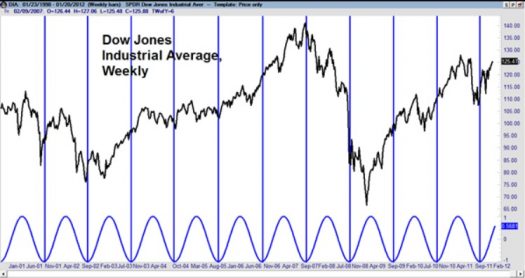 A top is due 26 weeks after a bottom in the example shown. Traders can look for other indicators to confirm the market reversal near the predicted dates where a market turn is predicted by the cycles.

While some cycles come nearly on schedule, there are other times when cycles can invert and the price action moves completely opposite to expectations. For example, this can be seen at the top in 2007 (near the middle of the chart example) when a cycle low was expected but a top occurred instead. Market moves following a cycle inversion can be rapid and large, and that is what happened when the cycle failed in 2007.

Why Cycles Matter To Traders

Cycle analysis is successfully used by some traders and can be a valuable forecasting tool. Many traders will know the key dates when market turns are predicted by cycles. But veteran traders will usually only use the trading signals when they are confirmed by other indicators.

That’s because this simple approach only works occasionally. And it isn’t a winning trading strategy on its own. That’s partly because multiple cycles are at work in any market at a given time. That makes it impossible to forecast market action with absolute certainty. Expected highs and lows for different cycles can be in conflict. That said, cycle analysis can be a valuable tool for traders when used with other indicators.

P.S. Our colleague Robert Rapier’s system of trading could change the way you think about earning income in the market forever…

Robert’s trading methodology works in up or down markets, in economic expansions or recessions…in normal times or during pandemics. Regular investors are able to earn a steady stream of “cash on command” every time they trade — and so could you.

Robert is currently setting up his next trades — but you’ll want to act fast before they go “live”. Want to get your hands on them? Click here now.