Here’s Why Investing In IPOs Is A Bad Idea…

This was a text I received about the (at the time) upcoming initial public offering (IPO) of ride-hailing company Lyft (Nasdaq: LYFT), which debuted on the stock market a couple weeks ago.

The person who sent the text was asking me what my opinion was of the company. Yet, regardless of what I had to say he was going to invest in it, anyway. The hype train was moving along at a good clip and he felt he would be missing out if he didn’t get in on the “ground floor.” Even after I told him it was unwise.

Too many investors think chasing the next hot IPO is a surefire way to get rich. They believe that by buying shares as soon as it goes public, they’re getting in on a “sure thing” before the rest of the crowd.
Unfortunately, that’s far from the truth. The fact is that most of the money has already been made.

But before I show you how the money has already been made, we first need to understand what it takes for a company to go public.

The ABCs Of IPOs
Most entities looking to go public bring in underwriters to help navigate the company through the entire process — in Lyft’s case JPMorgan Chase (NYSE: JPM) led the offering along with Credit Suisse Group (NYSE: CS), Jeffries Group LLC and 26 other financial institutions. The filing fees to go public amounted to a staggering $6.5 million for Lyft.

The underwriters help form the preliminary prospectus, often referred to as the “red herring.” This outlines the company’s financials, use of proceeds, vision and market research, among other things, to present to potential investors. (I always found it humorous that it was called a “red herring,” because the idiom often refers to something that misleads or distracts from important issues.)

They then use this red herring to generate interest and attract buyers. Most of the time, companies will do what is called a “road show” where they host events to pitch the merits of their company to the big institutional investors: investment banks, private-equity firms and hedge funds.

In exchange for investing in the company looking to go public, the investors get an equity stake in the company and/or options to purchase shares at a specified price… And it is here where most of the money is made.

#-ad_banner-#These early investors get the best deals, and by the time the company goes public, they will have made their money many times over. Activist investor Carl Icahn, who was an early investor in Lyft, sold his shares just before the company went public, booking his small fortune before shares were even tested in the public market.

Lyft granted directors, officers, employees, consultants and other service providers options to purchase its common stock at exercise prices ranging from around $13.16 to $13.43 per share. The company’s initial public offering price was $72 per share and shares closed at $78.29 on the first day of trading, an 8.7% increase. Shares traded as high as $88 that first day but have since returned to around their IPO offering price of $72.

If you acquired shares on the “ground floor” of around $13 per share, and they closed at $78 per share on their first trading day, it would be awfully tempting to book that 500% gain. And that’s exactly what many of these companies and people do. The “smart” money was selling.

Of course, not everyone can sell shares on the first day a firm goes public. Many of these shares are Restricted Stock Units, or RSUs, which requires the entities or individuals to hold shares for a certain period of time. For example, Lyft’s chief operating officer has more than 831,000 RSUs that were worth a cool $64.8 million on the first day of trading. However, he can’t unload any of these shares until the vesting period has passed, typically starting three to six months after the IPO. But you can imagine that as he passes each date where he can begin selling those RSUs, he will go ahead and book at least some of his gains.

The Truth About IPOs
It’s often the case that the bigger the buildup for an IPO, the bigger the fall over the subsequent months. Hype has its limits.

Just look at the Facebook (Nasdaq: FB) IPO in 2012. The day after the company went public, shares plummeted 10% and would subsequently fall nearly 50% from their initial offering price of around $38. 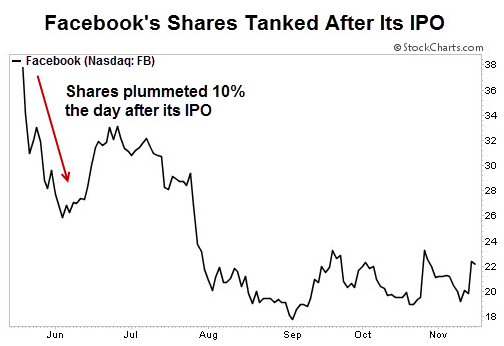 It’s a common occurrence with IPOs. Institutional investors like to cash in their big profits at the expense of the little guy, who’s buying the initial hype.

Now, just because a company sometimes flops after its IPO, it doesn’t necessarily mean it’s a bad investment. Again, shares of Facebook are up more than 350% since the initial public offering. But how many average investors were able to withstand seeing their investment tumble by 50% and not sell? The toil it takes is often too much for most investors to handle. The hot air is quickly released, buyer’s remorse sets in and they sell their shares at the bottom (often right back to the “smart money”).

On the flip side, for patient Facebook investors who waited for the dust to settle and got in at just the right time, well, they are up more than 780% compared with the stock’s 350% rise since the IPO. (Of course, timing these things is incredibly hard to do on your own — which is why we rely on a system and take our emotions completely out of the equation over at Maximum Profit.)

Action To Take
My point is that anytime you see an IPO being hyped up, show some healthy skepticism. Do your due diligence. Don’t feel as if you’re missing out by not buying on the first day of trading. Remain patient. Let the dust settle, and then go back and revisit the stock.

I like to wait about six months after an IPO before I even consider investing in it. This is for two reasons. One, after six months, many of the “lock-up” periods for the RSUs have expired, meaning that much of the big money has been allowed to sell their shares if they so desire. And, two, a half-year provides enough trading data to begin seeing where support and resistance levels lie, and what the market really thinks of the stock.

Lyft isn’t the first and won’t be the last IPO that gets a ton of attention this year. Its competitor Uber is expected to go public this year as well and we will likely see similar excitement from investors again. But don’t get sucked into the hype. If your friends get caught up in it, just wait six months and buy their shares at half the price…

P.S. Looking for bigger gains in less time? Want to reduce your risk? Discover how we generated $37,000 in gains last year alone — with no added risk. Watch this video now…