Lessons From The Hedge Fund Manager Who Lost Big Time…

Two and twenty… that’s the typical fees that hedge funds charge. With this fee structure, it means that they charge a flat 2% of total assets as a management fee and an additional 20% of any profits earned.

There’s a good reason that hedge funds can charge this much, and that’s because they usually earn outsized returns for their investors. Of course, that’s not always the case. Just as with us regular investors, hedge funds go through rough patches.

For instance, Bill Ackman’s Pershing Square Holdings has lost money in the previous three years (he’s since turned that around and is doing quite well so far this year). And David Einhorn’s Greenlight Capital (Nasdaq: GLRE) has greatly underperformed over the last three years. 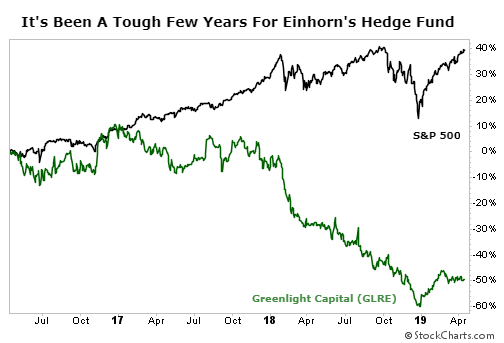 The investing environment hasn’t been easy on hedge funds over the last couple of years. Since 2017, more than 16 hedge funds have returned money to investors and closed their doors. One such hedge funder, Whitney Tilson, who folded his fund in September 2017, talked about the biggest mistakes that lead him to close his doors.

And I was shocked by what he said…

#-ad_banner-#First, you must understand that Tilson ran a long/short hedge fund, with an emphasis on the short side of the equation. Five and a half years ago, Tilson most famously brought to the public’s attention the fact that Lumber Liquidators (NYSE: LL) — which he shorted — was selling formaldehyde-drenched, Chinese-made laminate flooring.

When Tilson presented his findings and disclosed that he was short the stock at a shorting conference in November 2013, shares were trading at an all-time high of $115 per share. Today, they trade for less than $12.

But it proved tough to short companies during the longest bull market in history. Tilson was constantly worried about another downturn and made key mistakes that he says led him to closing his hedge fund.

So what was his biggest mistake?

I was floored when I heard him say this.

I’ve Been Preaching Portfolio Management For Years
Longtime readers know that I stress portfolio management in the pages of my premium newsletter, Maximum Profit. You see, even though I’m fond of saying that the system we use is the closest thing to “hacking” the stock market, it’s worthless if you don’t manage your portfolio effectively.

When I say portfolio management, let’s be clear. I’m referring to position sizing, stops, or exit indicators, and when and what you should sell. In other words, proper portfolio management amounts to not buying too much (or too little) of one stock, cutting your winners too early and not hanging onto your losers for too long, or worse, averaging down on your losers. (Never average into a loser if your original investing thesis no longer holds up.)

Tilson cited the example of when he bought shares of Netflix (Nasdaq: NFLX) near multiyear lows. As the stock climbed, he kept taking profits and ended up exiting out of his position far too early. Had he simply let his winner ride, he’d have been up more than 50 times on his original purchase.

Tilson solemnly admits now that his portfolio-management strategy was like pulling his flowers and watering his weeds, a combination that ended up losing him and his investors a lot of money… to the point where he had to shut down the shop.

Action To Take
It’s heartening to hear a former hedge funder who managed more than $200 million in assets talk about what I stress in Maximum Profit on a near monthly basis. It only provides further proof that our strategy and portfolio management is spot on. (And you’re paying a lot less than “two and twenty”…)

Perhaps Tilson would still be running his hedge fund if he were a reader of Maximum Profit. By following our simple market “hack” that delivers timely “buy” and “sell” signals, we’ve been able to cut through the noise of the market and deliver profits of 135%, 181%, 242% and more. Read this report to learn more.