How To Earn Monthly Income That Uncle Sam Can’t Touch

Well, another tax season is upon us. Like many people, I tend to procrastinate until the bitter end, racing against the April 15 filing deadline to complete stacks of forms and triple-check all my figures. Fortunately, the good folks at the IRS have extended this year’s deadline to May 15. So we have a little more time than usual. Maybe next year I’ll get started early… 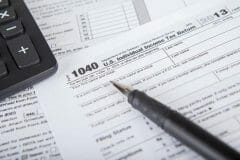 Either way, Uncle Sam always gets his cut. All of the dividends and interest received during the year were tallied up and listed on Schedule B and the totals reported on lines 2 and 3 of my federal 1040 — the place where all income investors must pay the piper.

As much as I love seeing all those payments roll in, this is the one time of year when I wish the dollar amounts on my 1099-INT and 1099-DIV statements were smaller. Some income qualifies for reduced rates (depending on the source), but other distributions are treated as ordinary income and fully taxed at rates up to 37%.

So if you’re an upper-bracket investor who received $10,000 in such payments, the government will be expecting $3,700, leaving you a net of just $6,300. You could wind up with even less once state taxes are imposed.

As they say, it’s not what you make that counts, but what you keep.

A Safe Way To Get Paid And Avoid Taxes

With that in mind, investors in the mid to upper tax brackets may want to consider shielding some income with municipal bonds. As you probably know, the interest from these securities is tax-free at the federal level. Bonds issued from municipalities within your home state are also exempt from state and possibly even local taxes as well.

Without getting into the nitty-gritty, municipal bonds are debt issued by states, cities, and agencies, often to raise money for public works such as new roads, bridges, schools, hospitals, and water treatment plants. They come in two main flavors.

General obligation (GO) munis are backed by the full faith and credit as well as the taxing authority of the government that sold them. That means the issuer can always increase property or sales taxes if necessary to make sure interest and principal on the bonds is paid.

Revenue bonds are used to finance specific projects… airports, sports stadiums, toll roads — things like that. The revenue generated by these facilities is then used to repay the lenders over time. Revenue bonds are generally riskier, but also carry higher yields.

To compare the payout on a muni bond to that of an ordinary corporate or Treasury security, you need to determine its taxable equivalent yield (TEY). The calculation is quite simple:

(You can also find handy calculators online, like this one.)

Let’s use the popular iShares National Muni Bond (NYSE: MUB) for an example, which holds more than 3,000 bonds from across the country. MUB has a current distribution yield of 2.1%. That’s not terribly exciting. But remember, Uncle Sam doesn’t take a bite.

There have been a few high-profile bankruptcies, the largest being the city of Detroit in July 2013, in which investors were on the hook for billions in unpaid debt. But these are isolated incidents. Between 1970 and 2009, there were just 54 defaults (and only 3 General Obligation) on tens of thousands of muni bond issues.

Most investors would probably be better off with bond funds than individual securities. All it takes is one troubled issue to wipe out years of gains on other holdings. Plus, the bid-ask spreads on individual bonds are often rather wide. As the “little guy” competing with large institutional investors, you will pay more on the entry and receive less on the exit, thereby reducing your effective yield.

Of course, there are other considerations, such as fees and expenses, performance, portfolio duration, use of leverage, and potential exposure to the alternative minimum tax (AMT).

There are hundreds of options between mutual funds, exchange-traded funds, and closed-end funds. In general, I prefer the closed-end route for this particular asset class. It can be somewhat illiquid, but trained analysts can spot changing credit qualities and take advantage of pricing inefficiencies. CEFs also generally offer richer payouts, and many trade at attractive discounts to their net asset value (NAV).

If I had to pick a favorite, I’d give strong consideration to Eaton Vance Muni Income (NYSE: EVN). The five-star fund has $566 million in net assets invested in muni bonds representing dozens of carefully-screened issuers, most of which are backed by strong AA and AAA borrowers to pay for hospitals, mass transit projects, and water/sewer system upgrades. Average maturities and duration fall in the intermediate range, giving the portfolio higher returns than short-term funds, with less interest rate sensitivity than long-term options.

These holdings support monthly distributions of $0.047 per share, for a yield of 4.6% at recent prices. That’s equivalent to a taxable payout of more than 6% for investors in the top tax bracket. And the fund is currently trading at a discount of 3% to its net asset value (NAV).

While a bit more expensive than passive ETFs, the well-managed fund has been worth every penny. Average returns over the past decade rank in the top 1% ranking, meaning it has outperformed 99% of its category rivals. The 15-year returns land in the top 2%.

As always, you should do your own research in this space before deciding what’s right for you. That being said, EVN is a compelling option for anyone seeking steady, tax-exempt monthly income. That’s why it’s a member of our portfolio over at High-Yield Investing, my premium newsletter service.

Either way, muni bonds can be an excellent way to lower your tax liability and keep more of what you earn. The higher your tax bracket, the more valuable they can be to achieving your financial goals. If you’d like to join us in our search for the best high yields the market has to offer, then go here to learn more.