The stochastic oscillator is a momentum indicator that measures the power of a price move.

Initially developed in the 1950s (but still used today in many forms), the indicator shows where the closing price is in relation to the recent trading activity. The formula can be applied to any kind of data, but it’s most often used with closing prices of stocks and ETFs.

The lowest low and highest high are measured over a look-back period, typically 14 days. These values can change each day. The ratio is multiplied by 100, so the stochastics is always expressed as a percentage.

How Traders Use Stochastics

Trading solely with the stochastic oscillator alone is challenging. Trade signals happen when the indicator moves above or below key levels.

One problem with this approach is that buy signals can repeat before a sell signal occurs, or vice versa. It is also possible that a new trend could develop without a signal.

Take a look at the example below. Using the blue horizontal line in the middle of the bottom panel of the chart, buy signals flash when the indicator moves above 20. Sell signals occur when it falls below 80. 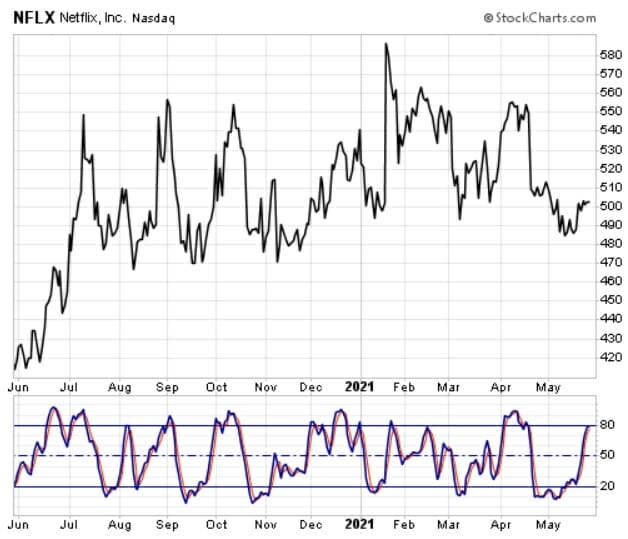 Why ​Stochastics Matter To Traders

​Stochastics are most often applied with the moving averages added to the indicator. When the two lines cross, the stochastic oscillator can provide a very timely signal on very short-term charts. That makes this tool a favorite of day traders.

However, on a stand-alone basis, traders should expect a number of false signals and losing trades. Ideally, this indicator is combined with several other tools to create more complex trading systems.

Oscillators work best when prices are in a trading range. A measure of the strength of a price trend, such as the Average Directional Index (ADX), could be especially helpful in filtering signals generated with the stochastic oscillator.

Long-term traders can apply stochastics to weekly or monthly prices. A healthy bull market will show a reading above 80 for an extended period of time. A bear market, meanwhile, will generally show a value below 20 for weeks or months at a time.

When these long-term indicators change direction, that is often a sign that the price trend is undergoing a significant reversal. This means traders might become more aggressive with their positions. They could increase exposure to stocks, for example, if the monthly stochastics for the S&P 500 index rises above 20 and decrease exposure when that indicator falls below 80.

P.S. If you want to keep making profitable trades in this wild market while lowering your risk at the same time, then you need to check out a trading service offered by our colleague Robert Rapier…