Before You Invest In The Next “Unicorn”, Read This…

Have you noticed all the hype about unicorns in the past few years?

No, I’m not talking about the mythical horned animals. I’m talking about private startup businesses (usually in the tech sector) backed by venture capital that are valued in excess of $1 billion.

The term was coined by a venture capitalist, Aileen Lee, in reference to their extreme scarcity. As a venture capitalist herself, she and her team did a study of these firms to determine just how rare they are. (You can read her initial findings from 2013 here.)

By her own estimation, just 0.07% of all private companies ever reach the $1 billion level. And at the time, she estimated that just 2-3 of these firms pop up in any given year over the past decade.

But these beasts aren’t as rare as they once were. In fact, you might say there are entire herds of these unicorns roaming free.

Not surprisingly, the internet is abuzz with talk of unicorns. You’ll find no shortage of headlines hyping the latest crop. And investors love to talk about the “what ifs”… “what if this is the next Facebook?”… “the next Google…” and so on. 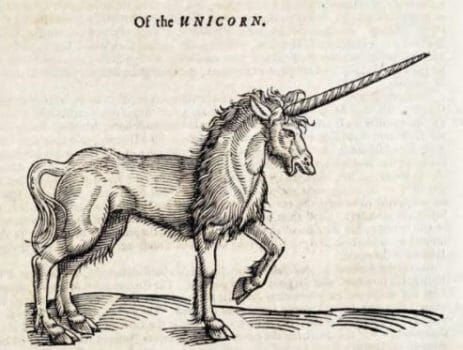 The Promise Of Unicorns

Football fans might remember the 1983 draft as one of the greatest pools of quarterback talent ever assembled. It was chock full of Superbowl MVPs and future Hall of Famers like John Elway, Dan Marino, and Jim Kelly.

​We might be looking at a similar phenomenon right now in the IPO market. So it’s easy to understand the excitement.

Ride-hailing service Lyft (Nasdaq: LYFT) was one of the first highly-touted names to go public in the past couple of years. It was quickly joined by its archrival Uber (NYSE: UBER).

If you take a look at the market capitalizations of these firms, which range anywhere from $25 billion (Slack) to $100 billion (Uber), you’d be forgiven for assuming that these companies are printing profits by the boatload. But that’s not exactly the case.

Most of these companies are trading based on the promise of what they’ll deliver in the future. That’s especially true when companies like this make their IPO on the market.

But are they worth it? That’s the real question.

In many cases, I would say no, at least not yet. Yes, some of these companies will go on to do great things and make investors a lot of money. But I can tell you this: none of the companies I mentioned above has yet to turn an annual profit.

While their revenue growth is staggering, most are still reporting steep bottom-line losses and spending colossal amounts of cash to attract new subscribers and customers. And while some of the recent IPOs I mentioned soared once they hit the public market, many have either fallen back to earth or simply treaded water since then.

This is the part where some more aggressive investors like to dig up a chart of a recent IPO and show a staggering return as proof that I’m wrong. Fair enough. And to be perfectly clear, I will admit that over at my premium Takeover Trader service, we have taken a position in one of the names I mentioned.

But there’s something going on here that investors need to be aware of before they pull the trigger on these stocks. I mentioned this a bit earlier, but it’s worth repeating…

With these stocks, it’s not really about what’s happening now. Investors are banking on future earnings potential maybe five to ten years down the line. Still, a lot can happen between now and then — including the emergence of disruptive new competitive threats.

While projecting their cash flow streams might be a fun exercise, the truth is we just don’t know with any high degree of certainty.

Instead, I’ll defer to professor Aswath Damodaran. He’s widely known as Wall Street’s “Dean of Valuation”. He literally wrote the book on equity valuation. I’ve got a copy on my bookshelf and have also heard him lecture. Trust me, he’s as sharp as they come.

He once valued Uber at $65 billion. That’s still an extraordinary figure. But it’s well short of what some pie-in-the-sky investors are willing to pay. He added that Uber is struggling to convert revenues into profits and that, “paying $100 billion for a company that still doesn’t have a viable business model is scary.”

That explosive growth is what makes these stocks so irresistible. There’s also the fear of missing out — we all want to grab the next Google or Facebook. You’ll have your chance. As I said, there are more and more private unicorns in the United States with each passing year — and a similar number overseas. Many from this crop will make their way to public exchanges.

But without prior due diligence, I’d keep a safe distance. I’m not saying to automatically avoid every new IPO that hits the market — only to be extremely cautious. For every winner, there are dozens of losers. Once the initial pop from the first week fades, newly-minted shares typically lag the market. One study from the University of Florida examined more than 7,000 IPOs over a 35-year period and found that over half (60%) went on to deliver negative returns over the following five years.

And in my experience, the hotter and more exciting the IPO, the frothier the valuations get. That doesn’t mean these aren’t good businesses with exciting growth prospects. But once they hit the market, the low hanging fruit will have already been plucked from the tree. Once the six-month lockup period expires, the early financial backers and venture capitalists will be cashing out and moving on.

I imagine some of the first investors into Lyft at the IPO price near $75 per share may already feel suckered with the stock having deflated back to $48 nearly two years later. 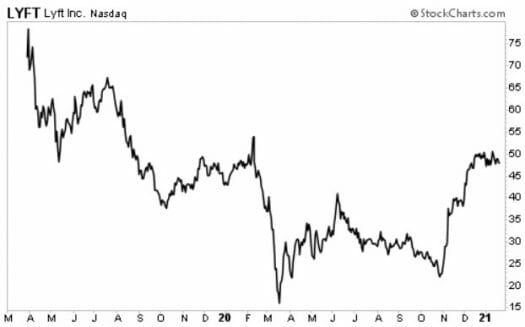 If you like the idea of getting in on the ground floor and aren’t one of the lucky few allocated shares in an upcoming IPO, consider business development companies instead. Also known as BDCs, these are companies that put debt and equity financing into small and mid-sized private businesses.

One of my favorites is Main Street Capital (NYSE: MAIN), which returns 90% of its profits back to investors each month. Aside from a compelling yield of 7.5%, the stock has delivered a powerful total returns since it went public in 2007.

You won’t find risky start-ups in the portfolio, either. Instead, MAIN looks for traditional or basic small-cap-sized businesses with solid track records. Perhaps not as exciting as investing in an IPO, but it’s safer.

P.S. My colleague Jimmy Butts has just released his personal “top picks” for the coming year to a select group of investors…

This year, he’s found 5 stocks that he believes will unlock mega-gains. And if history is any guide, these could be your best chance at making these kinds of returns in 2021 and beyond.