If You Like MLPs, The You’ll Love This Under-The-Radar Income Security

Nobody would ever consider electricity to be a discretionary purchase — it’s a constant “must-have.”

You can’t say that about too many other products or services. And that’s exactly why I consider regulated power providers to be good “forever stocks” that can be held for years with minimal oversight.

But I’m not writing today about the ordinary regulated utilities. Nothing against those stocks, but I believe there’s another angle for income investors.

I’m talking about a special class of securities that bundles the steady demand of a power utility with the contractual cash flows of a master limited partnership (MLP).

These stocks get little attention from the financial media – but taking a few minutes to get acquainted can be well worth your time.

The Future Of Energy Is Green

Many of the names in this unique asset class have performed quite well since the Covid-19 pandemic. That’s doubly impressive when you consider these unique businesses were created specifically for income, not growth.

But before I tell you about this unique investment class, you need to understand where we stand – and where the future lies – with respect to energy.

As you probably know, natural gas has displaced coal as the primary source of energy. It now accounts for about 35% of the nation’s electricity. But renewable sources such as wind, solar and hydro have been catching up as well and handle 17% of the workload (about half as much as natural gas). In other words, they power roughly one in every six homes and businesses across the country.

Over the past decade, renewable power generating capacity has doubled in the United States and Europe. But that’s nothing compared with China, which has seen astounding growth. The country now produces half of the world’s wind turbines and 60% of its photovoltaic solar cells. 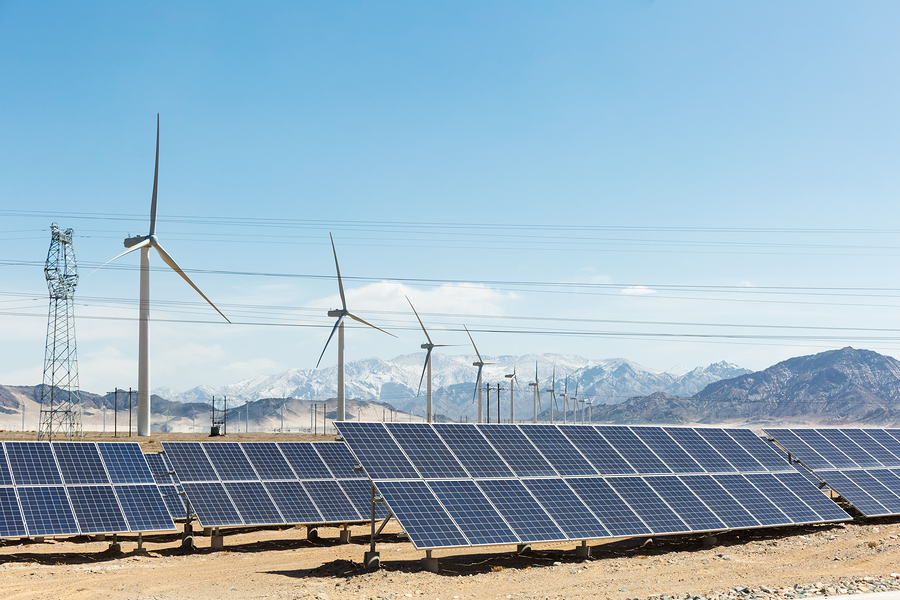 And while China is leading the way, it is by no means the only country making a big commitment to green-energy development (Ireland, Germany and Italy are a few other examples).

Renewable sources currently account for one-quarter of the world’s electricity, and that percentage is headed ever higher as costs fall and environmental standards tighten. The Center for Climate and Energy Solutions is forecasting that wind, solar and other renewable power installations will generate nearly one-third of the world’s electricity within the next two decades. Favorable tax credits and subsidies are also hastening the transition.

We’re talking about trillions of dollars in investment over the next few years.

Given the massive amounts of capital being thrown into the renewable energy space, it’s not surprising that some of the brightest financial minds have engineered a novel ownership vehicle to reduce funding costs.

It started back in late 2011 when Brookfield Asset Management launched a separate tracking company created for the sole purpose of operating its various green energy assets. That subsidiary was and is called Brookfield Renewable Energy Partners (NYSE: BEP), which hit the market with a bang and has been expanding ever since.

In much the same way that midstream energy companies sell pipeline space to oil and gas shippers, BEP sells its electricity output to utilities and other buyers under long-term power purchase agreements (PPAs). These offtake agreements are often in force for 20 years or more, providing steady, recurring income.

More than 90% of BEP’s cash flows come from these PPA contracts with dependable counterparties. And unlike plants fueled by coal or natural gas, the income from these renewable power contracts is generally tied to volume rather than wholesale electricity prices (just as MLP fee-based contracts are largely insensitive to fluctuating oil prices).

As a pass-through entity, the lion’s share of the cash is immediately distributed to stockholders. Going forward, management expects to grow its distribution rate by 5% to 9% annually.

BEP sports a healthy yield of 3% right now, which has been brought down thanks to a rising share price (not that investors are complaining). 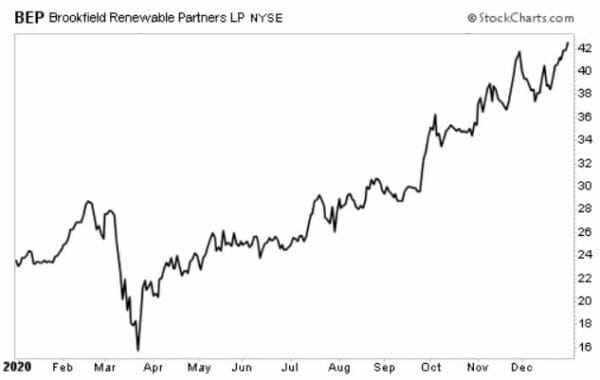 The point is, Brookfield was clearly on to something here, having achieved compounded annual returns of 20% since BEP’s IPO.

So it’s not surprising that other players have entered the game.

BEP was among the first “yieldcos.”

Just like MLPs and real estate investment trusts (REITs), this is a special class of securities with unique perks. These businesses were built to own long-lived assets that generate high levels of tax-advantaged cash flow. But instead of pipelines or rental properties, they own renewable power plants.

Yieldcos always have a larger parent (or sponsor) that maintains an equity ownership interest. The parent is also entitled to receive incentive distribution rights (IDRs), which generally range from 25% to 50% of distributable cash flow beyond a certain threshold.

From our standpoint as investors, lower is better. But the IDRs do encourage the sponsor to keep building and “dropping down” renewable power assets to the yieldco in order to boost cash flows.

The sponsor often bears the expense (and permitting headaches) associated with the construction of these costly plants. But once they are up and running, variable operating expenses are minimal — the sun and wind do most of the work. And with electricity buyers already lined up, yieldcos haul in predictable, low-risk cash flows.

Building a hydroelectric dam or offshore wind farm involves huge upfront expenditures, which are then depreciated over time. Because of those depreciation charges, the companies that operate these facilities typically report GAAP earnings losses. Those losses not only offset any taxable income in the early years, but they can also be carried forward to reduce future liabilities.

Some yieldcos won’t owe a penny in federal income taxes until well into the next decade. Without taxable profits, the dividend distributions are classified as a return of capital. As such, these dividends simply reduce your cost basis in the stock and aren’t taxable upon receipt.

Because of this, some financial writers refer to yieldco dividends as tax-free, but they are really tax-deferred. However, even when the tax bill comes due at the time the shares are sold, you will pay the lower capital gains tax rate, rather than your ordinary income tax rate.

This means that Uncle Sam doesn’t take a cut at the corporate level, so yieldcos can typically pay out fatter dividends than most other businesses.

By issuing shares, yieldcos can raise low-cost capital with which to purchase more assets from their parent. And the parent can use the proceeds to acquire or develop new plants. The cheaper financing makes it a win-win for both public shareholders and the sponsor.

As you might imagine, a number of large, established energy companies have decided to spin off their renewable operations into a separate arm to take advantage of this funding mechanism. And investors have accommodated by pumping billions into this new asset class.

If you’re interested in the yieldcos at all, then I encourage you to research these names further on your own. Each of these companies is distinct and has something unique to offer. That said, I do have a favorite that we added to the High-Yield Investing premium portfolio back in April of 2019 – and we’re sitting on a gain of more than 75% at last count.

The point is, yieldcos are yet another weapon in the arsenal to fight against low interest rates. And given the steady, reliable nature of their assets — not to mention the overwhelming forces of demand behind them, they should be an option to consider for any serious income investor.

In fact, I just released a report about 5 “Bulletproof Buys” that have weathered every dip and crash over the last 20 years and STILL handed out massive gains.