There are many momentum measures used by traders. But the Rate of Change (ROC) indicator shows momentum in its simplest form.

As a pure momentum oscillator, ROC shows the percentage change in price over a specified time frame. Other momentum measures, in one way or another, can be thought of as modifications of this basic calculation.

To calculate ROC, divide the current price by an earlier price. Subtract 1 from that value and multiply by 100 to convert to a percentage:

For example, dividing the current price by the closing price six months ago will give the 6-month ROC.

This calculation can be applied to any type of data series, and can be used for stocks, ETFs, mutual funds, or even economic data. (In fact, the widely followed Consumer Price Index (CPI) is a 12-month ROC calculation of price change.)

How Traders Use Rate Of Change

Traders can use ROC by itself as a complete trading strategy. Traders could buy when the ROC is positive and sell when it falls below zero. You can see this at work in the chart below. In this example, you would have avoided a large loss during the Covid-19 selloff, and captured major upside when ROC turned positive again. 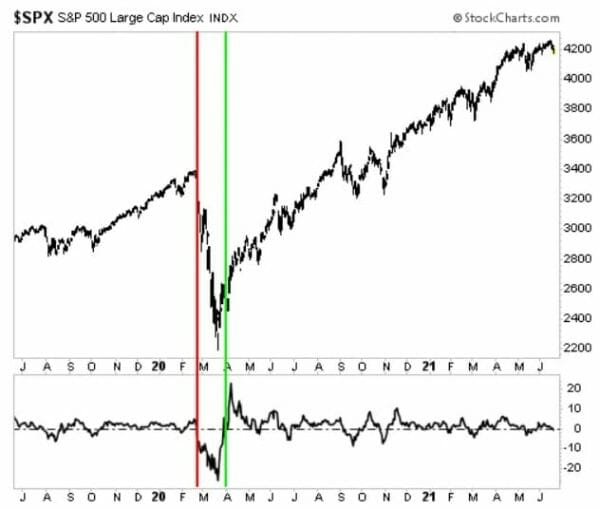 Traders use a variety of time periods for the indicator or the average. But a 26-week ROC with a 13-week moving average are common settings. In addition, traders can identify bull and bear markets by the value of ROC. Bull markets will have a positive value and downturns will be accompanied by a negative ROC.

Why Rate Of Change Matters To Traders

ROC is a versatile indicator. It identifies opportunities for trading, spotting bubbles, and many other purposes.

​A number of studies have shown that high-momentum stocks tend to outperform over the next three to twelve months. Traders can screen for the stocks with the highest ROC and buy them. ROC will often turn lower and fall below its moving average ahead of a major price decline. This offers a timely sell signal. It is also helpful to see when ROC turns negative, since that is often a signal that more price declines are ahead.

For spotting possible bubbles, consider our example of the S&P 500 in the chart above. Before it collapsed, the S&P 500 climbed roughly 400 points in about four months. The ROC was not high at the time, but selling at the signal would have saved traders from a thousand-point decline.

As a rule of thumb, an ROC above 100 can be a sign of a major bubble, since price advances like this are generally unsustainable. For that matter, whenever the 6-month ROC is above 50, the advance is unlikely to continue.

Traders could also add Bollinger Bands to the ROC to help spot turning points. When ROC is above the upper Bollinger Band it is more than 2 standard deviations above average. This is something that should happen less than 2.5% of the time. This is a warning that prices have advanced quickly and a reversal could be near. On the flip side, an upward move in prices would be expected when ROC falls below the lower Bollinger Band.

P.S. Our colleague J.R. Butts has been researching the next investment frontier in tech. And he’s convinced this is the “next big thing”…

You may already know that Elon Musk is busy commercializing outer space with his company, SpaceX. Dozens of other companies are scrambling to win the race, too. But what’s barely getting any attention in the mainstream press is one of Musk’s “secret” projects that could be an absolute game-changer. And J.R. has discovered a unique “backdoor” way we can gain exposure before the crowd catches on…