How To Get Paid From Booming Global Trade

I’m betting that sometime today, a shipping container will fall into the sea. That’s what the odds tell us, anyway.

According to a survey by the World Shipping Council, an average of 612 containers go overboard each year. Some even wash up on distant shores, disgorging their soaked cargo. Scavengers on Dutch islands recently picked through furniture, clothing and televisions that had broken free after a ship was battered by 30-foot waves and fierce winds.

In the grand scheme of things, though, such events are rare. About 99.999% of these sturdy steel boxes make it safely to their destinations. There are approximately 30 million shipping containers in use worldwide, and most make several transits annually. Built to be nearly indestructible, these stackable twenty-by-eight foot containers can safely hold up to 25 tons of cargo. Pry one open, and you might find tennis shoes inside… or kitchen appliances, sporting goods or lawn mowers. There are even refrigerated units for frozen foods and other perishable cargo.

Consumers give little thought to how merchandise arrives on store shelves at their local Wal-Mart or Target. We don’t even notice until items are out of stock (or prices creep higher). But think how empty those store shelves and produce bins would be without today’s modern shipping container. Costa Rican pineapples would quickly become scarce. Your favorite imported German beers would dry up. And forget about any electronics with a “Made in Taiwan” sticker. Such goods are constantly being loaded into containers for travel around the globe. Bustling seaports in cities such as Shanghai, Singapore, Antwerp and Los Angeles handle hundreds of millions of tons of inbound and outbound cargo each year.

And they are getting busier. Annual global container traffic surpassed the 100 million mark for the first time in 2005. Volume has doubled since then and continues to grow. Approximately 204 million containers are expected to crisscross the world’s oceans this year, carrying goods with an estimated value of $4 trillion.

Of course, the vessels hauling all these containers don’t work for free. For every crate of television sets or bin of coconuts, a shipper got paid to move them. There are several publicly-traded options for investors — and they usually carry nice dividend yields, too. (My favorite stock in this group is converting that demand into a robust dividend yield nearly three times the S&P average. More on that in a moment…)

The Way We Trade 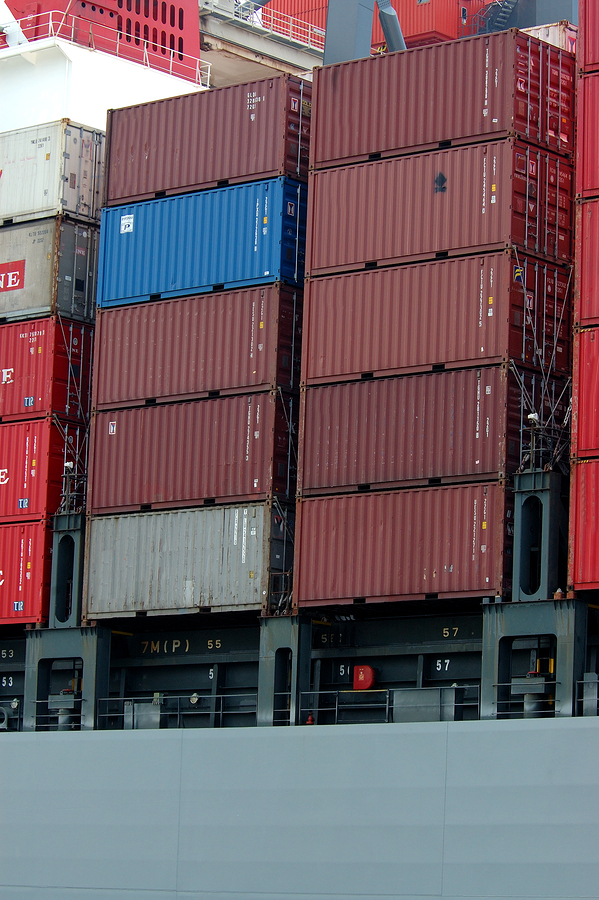 About 90% of all global trade is seaborne. Once upon a time, ocean-going goods such as sugar, wine and tobacco were moved in large casks called hogsheads. But metal containers started gaining favor after World War II and proved so effective at speeding up the loading process, eliminating breakage and theft and lowering costs that they now account for all but a small fraction of the world’s non-bulk (i.e. coal and iron ore) transportation.

The dimensions and building specifications have become standardized over the years. You’ll often see the term ‘TEU’ in this industry, which stands for twenty-foot equivalent units. But 40-foot containers (2 TEU) have become more common. Either can be easily loaded onto a semi-trailer truck or railroad for intermodal travel.

If you recall the scene from the movie Cast Away when Tom Hanks’ character was rescued, it was a container ship that crossed paths with his life raft. These massive leviathans can measure more than 1,300 feet from bow to stern — longer than 4 football fields.

To capture economies of scale, containerships have roughly doubled in size over the past decade. The largest class contains more steel than the Eiffel Tower and boasts 20,000+ TEU of capacity. That’s enough deck space to fill a 35-mile-long train two containers high. In the past, it might have taken a dozen ships to haul the same amount of cargo, so the bigger ships have dramatically expedited transit times and increased overall efficiency. While the biggest still can’t fit through the Panama Canal, recent canal expansions have accommodated larger vessels — opening up shipping routes from Asia to the U.S. East Coast.

Ports in Norfolk, Savannah and Charleston have all enjoyed strong growth and record freight tonnage recently. Still, they are relatively tiny. The world’s largest container terminal in Shanghai handled 37 million TEUs last year. Rotterdam, the Netherlands, saw 13 million TEUs loaded and offloaded, while Hamburg, Germany, processed 9 million. Many of these larger deepwater ports are expanding to keep up with rising shipping volume.

As with any industry, shipping has its ups and downs. While demand is generally steady, the supply side fluctuates as old vessels are scrapped and new ones are built. The lack (or excess) of available capacity is reflected in shipping rates, which can vary widely according to the size of the ship and the particular route being plied. Boom and bust cycles are common, impacting the profits and balance sheets of large shipping lines such as Denmark’s Maersk, China’s Cosco, and France’s CMA-CGM.

While the occasional slump is to be expected, the long-term outlook is bright. The volume of goods being moved by container has risen inexorably since the 1980s. Aside from a mild single-digit dip in the recession of 2009, there hasn’t been a single yearly decline over the past two decades. Since 2011, container volume has expanded at 1.4 times the pace of global GDP on average. That multiplier effect means that if the global economy grows 3% this year and next (as forecast), it could stimulate a 4.2% annual increase in container shipping.

Beyond that, as investors, we simply need to connect the dots…

1. The world’s population is growing by 200,000 people per day.
2. More people means greater consumption of raw materials and finished goods. More bananas, more televisions, more blue jeans, more coffee tables… the list is endless.
3. There are no railroads from Hong Kong to Sao Paulo or Johannesburg to Los Angeles. Unless we discover a miraculous technology to beam all this stuff from one place to another a-la Star Trek, it’s going to have to be moved by ship.

Action To Take
Containerships are the most cost-effective way to move manufactured goods from port to port — the workhorses that facilitate global trade.

As I mentioned earlier, there are a number of options for investors here — Danaos (NYSE: DAC), Eagle Bulk Shipping Inc. (Nasdaq: EGLE) and Diana Shipping (NYSE: DSX) are just a handful that come to mind. But if you aren’t comfortable investing in a business whose fortunes are tied to volatile rates that can change with the wind, there is a solution.

My most recent recommendation in High-Yield Investing is a company that owns a vast fleet of containerships. But it doesn’t transport anything — instead, it leases these vessels out to third-party shippers. So the renters bear the brunt of any market downturns. They also cover fuel costs and handle all cargo logistics.

Because these fixed charter contracts can last for five to ten years, the owner is largely insulated from day-to-day rates and simply cashes rent checks. With more than 100 ships on the water and under contract, that’s a lot of checks — adding up to $4.8 billion in future revenues. Unfortunately, since this is a fresh pick, it wouldn’t be fair to my premium readers to reveal it today. But if you like visible, predictable income and lofty dividends, then you can get the name and ticker symbol of this stock and learn more about High-Yield Investing right here.