My Market-Beating System Found A Stock Peter Lynch Would Love

There’s a handful of well-known names that have left their imprint on the investing world, whether it was with unprecedented streaks of market-beating returns or famous bets against major events (think financial crisis and “breaking” the Bank of England).

At the top of that list is usually the “Oracle of Omaha,” aka Warren Buffett. But another notable money manager is Peter Lynch. He ran the Magellan Fund at Fidelity Investments between 1977 and 1990. All he did was churn out an average return of over 29% per year, which was more the double what the S&P 500 did over the same period.

He also wrote two notable books — “Beating the Street” and “One Up on Wall Street” — as well as a lesser-known book, “Learn to Earn.”

Lynch was also famous for his simple investing philosophy and a number of famous mantras and terms used in finance today such as “invest in what you know” and “ten bagger” — an investment worth ten times its original purchase price.

At his core, Lynch was a bottom-up, kick-the-tires type of stock picker. He wasn’t interested in hot stocks or industries. He was wary of companies that were growing earnings at an inordinate pace. Lynch wanted to see consistent earnings with a strong balance sheet and low levels of debt.

Let’s Search For Stocks That Fit The Peter Lynch (And Maximum Profit) Mold
I thought it would be interesting to search for companies that met Lynch’s investing principles and then took those stocks and run them through my Maximum Profit system. (I’ve discussed how my system works recently, but you can go here to learn more.)

Here are the criteria – and Lynch’s investing principles – that I used.

First, I excluded financial firms, even though Lynch was open to them, because their financial disclosure requirements are not directly comparable to companies in other industries. Then I looked for stocks that had P/E multiples below the industry average and below their own five-year averages.

As I mentioned, Lynch was wary of firms that were growing too quickly, so I eliminated companies that had earnings-per-share growth rates of 50% or more. My final filter required that total liabilities to assets for each company be less than its industry average.

I was left with only 25 stocks… and only one of those 25 passed my Maximum Profit criterion. 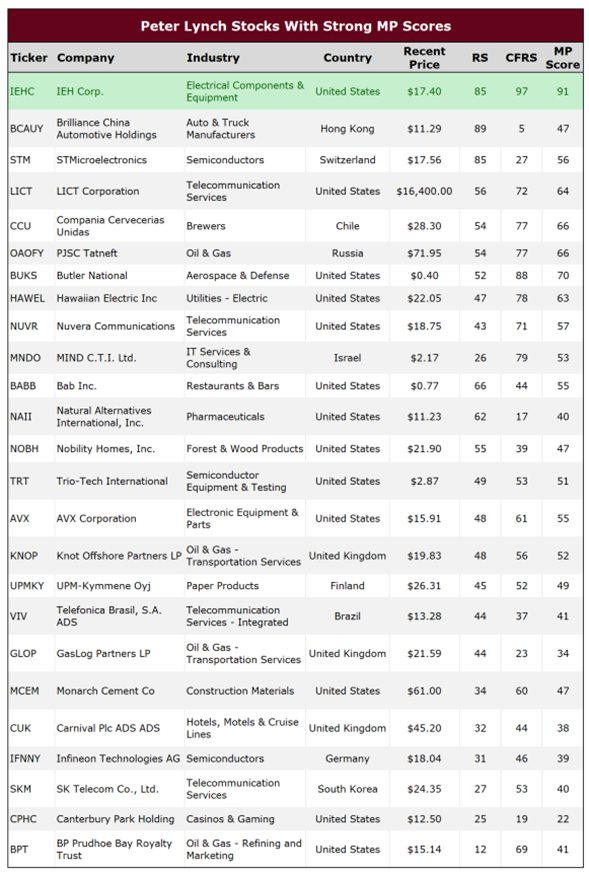 IEH Corporation (Nasdaq: IEHC) is a tiny ($40 million market cap) company that’s engaged in the design, development and manufacturing of printed circuit connectors for high-performance applications. The company was founded in 1937 and is headquartered in Brooklyn, New York.

Its bread-and-butter product is its hyperboloid connectors, which have been used by the military, aerospace and medical industries for over 40 years. IEH leads its industry in design, innovation and reliability.

This small company churned out $23.4 million in sales in fiscal 2018, a 16.6% increase over the prior year. It reported earnings per share of $1.11 in 2018, and it has reported profitable (and consistent) earnings for more than a decade. Finally, the company has $1.4 million in cash and zero debt, and its P/E ratio of 8 is slightly below its 5-year average of 9.

Action To Take
One word of caution: this company is thinly traded, which can result in price volatility at the time of entry and exit. At the same time, IEH is just the sort of under-the-radar company that Lynch would likely look at in his quest for the infamous “ten-bagger.”

Also remember that the investing ideas I present here are intended to provide a starting point for further research, not a final recommendation. My Maximum Profit readers will get a thorough analysis of any pick identified by our system that winds up in the portfolio.

In the meantime, I’d like to invite you to learn more about our system… As I like to say, it’s the closest thing to legally “hacking” the stock market — and it’s helped us make gains of 135%, 181%, 242% and more — all in a matter of months. To know more about this powerful system and how it can work for you, watch this short video now.