Expectations Are Shifting… Will It Flip This Bull Market On Its Head?

I have three young boys running around in the yard right now. They seem to be playing “Calvinball.” That’s a game from the old “Calvin & Hobbes” comic strip.

Now, if you’ve never played Calvinball, the rules are confusing. It’s a game that you never play the same way twice. Anyone can add a rule, and any player can change the rules at any time, even if no one else agrees with the change.

Calvinball is what I call it when the boys are just running around and getting along. It’s simply a few moments of peaceful chaos.

Now that you know I’m a fan of Calvinball, you might understand why I’m so excited about the chart below. It’s a chaotic picture, but it offers investors important information.

Let me break that chart down.

– The bars are the VIX Index. VIX is a measure of market volatility. It’s also known as the Fear Index because VIX rises as the S&P 500 falls, and price declines are associated with fear in traders.

– The thin blue dashed line on the chart is the 26-day moving average (MA) of the VIX. I have a 26-period MA set as the default on one of my chart templates. It’s an unoptimized value that works well on weekly charts where 26 weeks is equal to six months. It also works well on daily charts since chart patterns are fractal (which means they display similar patterns in any timeframe).

– Blue rectangles highlight times when the VIX was above its 26-day MA. The S&P 500 sold off at those times, demonstrating that fear, as measured by the VIX, rises as prices decline.

At the end of last week, VIX rose to its moving average and the S&P 500 declined. This is important information. It tells us the stock market is likely to be volatile.

News confirms that. We have earnings, a Federal Reserve meeting, and war drums in the Strait of Hormuz where Iran sized a British tanker.

Earnings have just started and are off to a better-than-average result. According to FactSet, 16% of the companies in the S&P 500 Index have reported earnings.

The Fed is adding to the volatility. Traders now expect the Fed to cut short-term interest rates by 0.25% at their meeting on July 31. Just a week ago, traders expected a 0.50% cut, and two months ago, they expected no change in rates. 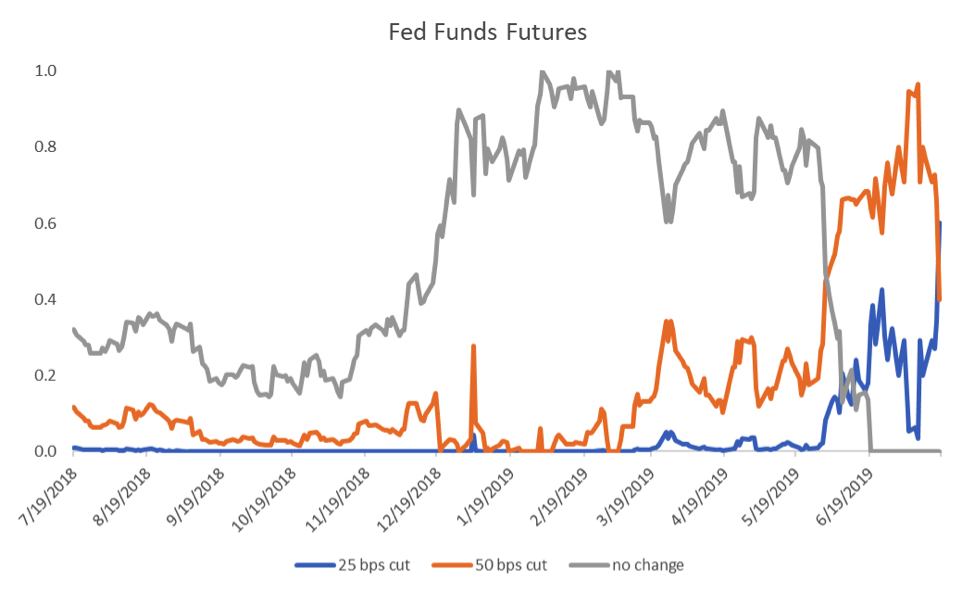 Last week’s rapid shifts in expectations were prompted by conflicting statements from Fed officials. It seems as if the Fed is reacting to market expectations rather than the economy. And that could fuel volatility if the Fed fails to meet the expectations of traders. As the chart above shows, those expectations are shifting rapidly.

On top of all this, we could see military action in the Middle East, which could be bearish.

The British news site independent.co.uk provided an excellent summary of the news related to Iran:

“Relations between Britain and Iran seem to be the bleakest they have been for decades with the confrontation over the tankers and rising accusations and recriminations.

At the same time there is increasing sabre-rattling in the wider arena of the region with Donald Trump’s administration sending troops back to Saudi Arabia and Washington and Tehran raising the tempo of mutual insults and threats.

In London the cabinet emergency committee, Cobra, met until the early hours of Saturday morning and in the evening came the news that British Airways was cancelling flights to Cairo for a week as a security precaution.

It was not immediately clear if this was related to the situation in the Gulf, but the development added to the uncertainly and trepidation.”

Uncertainty and trepidation are not bullish conditions for the stock market. Negotiations are most likely underway to resolve the situation, but it’s serious.

Bad news like this has led to bear markets in the past with declines in 1991 and 1973 directly tied to news from the Middle East.

In the next few weeks, I believe traders on Wall Street will behave like those young boys in my back yard. We will see the results of their game of Calvinball in the S&P 500. But I am prepared. I’ll be looking for trade signals in put options to benefit from this volatility.