One Of The Oldest Chart Patterns Around… But Does It Still Work? 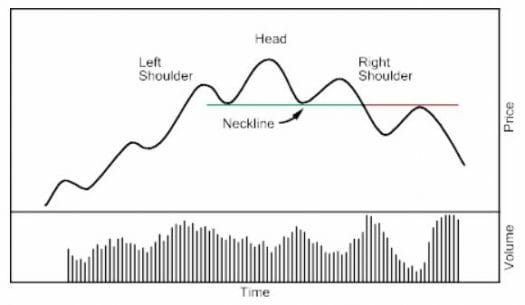 Using software, we can develop a precise definition of the pattern that avoids the inconsistency of less rigorous approaches. This definition can become complex.

For example, an MIT professor explained that an H&S pattern is a date series where “the magnitudes and decay pattern of the first twelve autocorrelations and the statistical significance of the Box-Pierce Q-statistic suggest the presence of a high-frequency predictable component in stock returns.”

This definition isn’t practical for most traders to use because most of us don’t know what all those words mean. However, by using definitions like that, objective studies can be done to determine if the pattern works.

Studies like this show us that old ideas can be valuable in the market when those ideas are defined precisely and followed with a disciplined approach.

The problem is that real H&S patterns rarely resemble the precise line diagrams seen in books. The chart below shows one that occurred in real market conditions. The shoulders are nearly, but not quite, the same height.

The problem with charts is that their interpretation is subjective. Many traders find an H&S in almost every chart they look at because some traders tend to see what they want to see.

Because traders see what they want to see, results vary. Some may find success looking at charts while others will suffer losses.

P.S. If technical analysis isn’t your thing and you’re looking for high-quality long-term stock ideas, then check this out…

Our colleague Nathan Slaughter just released a brand-new report on 5 “Bulletproof” stocks that have a proven track record of holding up in any market — and enriching shareholders year after year. Each of these stocks yield more than 5% right now — and all of them are worthy candidates for any serious investor’s portfolio.

You can go here to learn about the report right now.