Holiday weekends bring families together. And, if we’re all being honest, there might be some family members we wish didn’t come together. Often, they are the individuals with less-than-pleasant personalities.

You might have guessed I have a family member like that. She’s an older woman who reminds me of Hetty Green — the “Witch of Wall Street.”

Part of her legend has to do with her frugality. That she wore the same black dress every day until it wore out. Or how she moved between cheap apartments in New Jersey to avoid income taxes. There’s also the somewhat horrifying fact that Hetty was too frugal to pay for her son’s medical care when he broke his leg… which was eventually amputated.

Now, despite her… eccentricities, Hetty had an incredible mind. She built her fortune through investing, a unique accomplishment at a time when women were not welcome in every work place.

Ahead Of Her Time 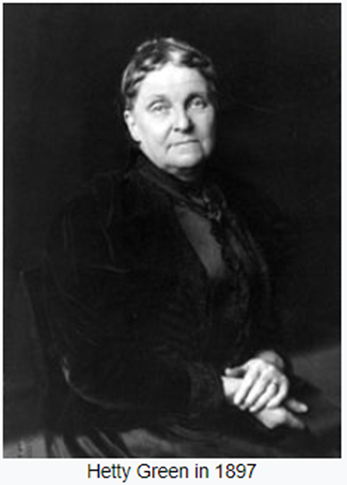 I was recently reminded of how different the world was back then when I saw a reference to a paper published in 1917. The paper was called “The Effects of the Legal Minimum Wage for Women.” The first minimum wage law was passed in 1912 and covered only women and children because the lawmakers assumed women and children could not effectively bargain with employers. Because of the laws, women were generally earning $1 a day or more.

It was in this environment that Hetty Green became one of the most powerful forces on Wall Street.

While much has changed since that time, some things remain the same. Hetty’s biographers often focused on her eccentricities rather than her accomplishments. That’s why she’s known as the “Witch of Wall Street.”

Now, she was a frugal woman, and this made her stand out a time when wealth was often flaunted. But her focus wasn’t on fashion or material wealth. She made her fortune using the same principles of value investing that would later be written down by Ben Graham (who then taught them to Warren Buffett). While Graham and Buffett are well known, Hetty Green is actually the developer of value investing, or the “Grandmother of Value,” as I like to call her.

She made her fortune by buying low and selling high. “There is no great secret in fortune-making,” Hetty explained. “All you do is buy cheap and sell dear, act with thrift and shrewdness and be persistent.”

This is an idea that can be applied to the current market. Hetty preferred buying cheap assets that she could value. She often invested in mortgages backed by buildings or on railroads with extensive property holdings. She focused on tangible value and acted when she spotted a bargain.

There is much we can learn from Hetty Green. The market is a lot different today, from online trading to algorithmic computer models to unicorn tech IPOs… the list goes on. But at the end of the day, the same principles Hetty used back then can still be used by us to create lasting wealth in the present day.

For my part, I’m duplicating her quiet success and following her lessons on avoiding losses while growing capital under any type of market condition. Like Hetty, when I see volatility and extreme emotions on Wall Street, I want to step in and take advantage of it.

Also like Hetty, I want to focus on the short term and find opportunities to compound wealth rather than making large bets that will either pay out big… or cause large losses. By keeping your emotions in check and grinding it out with steady, successful trades, you’ll be far ahead of the crowd over the long-term.

It takes patience and discipline to trade the way. But thanks to this approach, I’m able to make a nice living on my own terms. It’s also why my subscribers and I have been able to pocket thousands in income each month. Go here now to see how you can too…