I Still See Opportunity In This Market. Here’s Why…

I’ve been fielding a lot of phone calls lately from friends and family members. And they are scared…

#-ad_banner-#Some have asked whether they should sell their house now, before a recession hits. Others are wondering if they should postpone their house purchase. And, of course, they are all worried about their retirement accounts.

The fear is not limited to my circle of acquaintances. A lot of folks are downright spooked. Whether it’s the trade war, the Federal Reserve’s decision to lower interest rates, President Trump’s tweets, or headlines about the dreaded yield curve, there’s a lot of tension and uncertainty surrounding the market and the economy.

But I don’t share these feelings. I still see plenty of opportunity in the market. To be sure, I’m not saying that “this time is different” — the four most dangerous words in investing — as we are closer to the end than the beginning of the economic expansion. And the inversion of the yield curve has been one of the most historically reliable indicators of a recession. I’m just not sure we will witness the sort of recession that most people are fearing — a 2008-like financial crisis — and I believe that the market could reach new all-time highs before all is said and done.

To see where I’m coming from, let’s walk through one of the most common questions/themes that has people worrying about an imminent global meltdown: the belief that we are overdue for a recession and major market correction.

The Recession Question
At 122 months, the current expansion is the longest in history. The yield curve inversion has signaled that the end is near, and, again, this has historically been one of the most reliable indicators that the economy is heading for a speed bump. I’m not arguing this point. However, what the financial media usually fail to mention is that after the yield curve inverts, the stock market invariably continues to go up for varying periods of time. 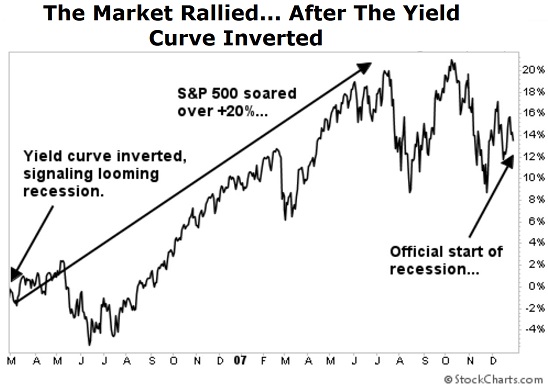 The story is similar for the previous recession in 2001… the yield curve first inverted in June 1998, two years before the start of the recession. The S&P 500 rallied nearly 40% before tapering off going into the 2001 recession.

As Mark Twain is credited with saying, “History doesn’t repeat itself, but it often rhymes.” And based on history, we still have roughly a year before stocks peak.

As for a major market correction…

We haven’t witnessed the proverbial bear market (as indicated by a 20%-plus drawdown), but we’ve come awfully close… twice.

The point is that while this has been the longest bull market in history, it hasn’t come without its ups and downs. We’ve been mere fractions of a percent away from this bull market officially ending.

Action To Take
I think there is still plenty left in the tank for the market to keep hitting new highs. Consumer spending is solid; shares of stocks like Home Depot (NYSE: HD) and Target (NYSE: TGT) jumped earlier this month after reporting better-than-expected earnings (Target spiked higher by nearly 20% following the release of its earnings August 21). The recent interest rate cut will trickle into lower mortgage rates, which will likely boost the housing market, and unemployment remains at historic lows. In short, unless we have a rogue wave that blindsides us (the dreaded “black swan”), the economy should continue to chug along and there should be plenty of opportunities to snag some gains from this market.

I know it looks scary out there, and most folks are worried, but my subscribers and I don’t want to follow the crowd. We will continue to do what works for us — namely, following the Maximum Profit’s buy and sell signals. Just recently, the system flagged two new stocks as “Buys.” One is an international payment and financial services company, and the other is a small biotech company that just launched its first product. To learn more about my system — including how to get these picks delivered to your inbox, go here.