How To Understand Risk And Reward With Selling Put Options…

They say “What gets measured, gets improved.” And yet, all too often, traders don’t actually measure the potential return and effectively match potential gains against the risk inherent in a trade.

One of the most important skills for any trader is to be able to analyze risk and return. This allows you to make an effective decision about whether to take the trade and how much capital to allocate.

If you’re new to the put selling strategy, let’s quickly explain how the process works.

We begin by selling a put contract on a stock, ideally on one that we would not mind buying at a lower price in case we are assigned. The put option obligates us to buy the stock if the price of the stock is below the put’s strike price when the option expires. Puts are offered with various strike prices, so you can pick out a contract with a strike price that is close to what you would be willing to pay for the stock.

For selling this put, we are paid a “premium.” This payment represents compensation for the obligation we are assuming and is the primary way that we generate income through the strategy.

In order to get an idea of our potential reward for the trade, we need to calculate a nominal return on capital. This gives us a reference point so we know how the strategy stacks up to other investment opportunities — specifically those designed to generate income.

The problem with analyzing the put selling strategy is that we receive capital initially for selling the puts. But we are not making a traditional investment where we can easily calculate the return based off the amount of capital allocated.

However, there is a solution for this. Remember, when we sell a put contract, we are obligated to buy shares at the strike price if the stock drops below this level. So from a capital allocation perspective, we need to be able to allocate capital toward buying the stock should our obligation be assigned.

To determine our rate of return, we can divide the income received from selling the put contract by the amount of capital we would need to set aside to buy the stock.

As an example, let’s say we’re in the month of April and want to sell a put option on XYZ Company. It’s trading for $135 per share, and you haven’t purchased the stock because you think it’s a little too expensive. But you would be willing to own it at $130.

You could sell a put option right now with a $130 strike price that expires in July for $4.60 per share. If XYZ falls below $130 at the July expiration, the put will be automatically exercised by its owner. The seller (you) will purchase the stock at $130 per share. But don’t forget the $4.60 per share you received for selling the put — that means you’re actually buying the stock for $125.40 per share ($130 – $4.60), a nice 3.5% discount off of the current price. Here’s how your return would look in various pricing scenarios for XYZ: 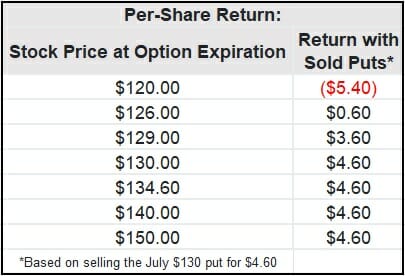 Keep in mind that we can deduct the premium you receive from the capital set aside to get the actual amount of original capital that is potentially coming out of your account.

Once you divide the premium received by the adjusted amount of capital set aside, you are left with a nominal potential return for selling the put contract. This return takes place over the amount of time between when the put contract is sold to when it expires.

The amount of return will vary greatly. It will depend on how long until expiration, how volatile the stock is, and interest rates, among other variables. For the majority of put selling trades, we like to typically sell contracts that will expire in four to eight weeks. And we would like to generate a return between 1.5% and 3.5% on the trade.

Putting The Return Into Context

Once we have the nominal rate of return calculated, it is best to annualize the number. This allows you to see how much income you could generate if you made this trade continually throughout the year. This is an important step because generating a return of 3% means nothing without the context of time. Without this, you could compare your 3% return to a dividend stock with a yield of 4.5% and not be able to effectively determine which is better.

A standard industry practice is to take the nominal return, divide it by the number of calendar days the trade will take, and then multiply by 365 (the number of days in a year).

So, for instance, let’s say our trade is expected to generate a return of 3% over the course of 55 days. We would take 3% and divide it by 55, and then multiply it by 365. This gives us an approximate annualized gain of 19.9%. Now, this trade looks much more impressive than the dividend stock with an annual yield of 4.5%.

Of course, there’s no guarantee that you will be able to find a similar trade to reinvest your capital in when the current put contract expires. But this is a way to get a general idea of what your annualized returns would be.

The calculation we have discussed here is for a conservative, cash-secured put selling strategy. For traders willing to take on a bit more risk by using margin, the returns from this strategy can be huge.

The calculation we have discussed is also based on the best-case scenario for the strategy. If our puts are not assigned, we keep the option premium with no strings attached and move on to the next trade.

But what happens if the puts are assigned and we are obligated to buy the shares? This introduces a whole new level of risk that we must account for. We’ll save that for another day, but keep in mind what was mentioned earlier — we like to sell puts on stocks we would not mind owning if they were assigned.

P.S. If you’re looking for a way to generate steady income with reduced risk, then you need to turn to our colleague Robert Rapier…

Robert can show you how to squeeze up to 18 times more income out of dividend stocks, with just a few minutes of “work” each week. Click here for details.