Why It Pays To Look For “Picks And Shovels” Tech Stocks

Next time you’re walking on the beach, think about the sand beneath your feet, and how much it’s changed our world.

The most common constituent of sand is silica, which is an oxide of silicon, and silicon is a crucial component in microelectronics and computer chips. Hence the name “Silicon Valley.”

Before silicon, components of computer chips were made from germanium, an element from the carbon group that is chemically akin to tin. But then along came Gordon Moore, the co-founder of Fairchild Semiconductor and a former CEO of Intel (Nasdaq: INTC).

Moore, who in 1965 famously described a doubling every year in the number of components per integrated circuit (“Moore’s Law”), believed there was a better material, one that was far cheaper and more plentiful. And he was right. Silicon is the seventh-most abundant element in the universe, and the second-most abundant element on the planet, after oxygen. It also makes up about 25% of the Earth’s crust.

Today, silicon is still the industry standard, and in today’s technological world it’s needed more than ever. Not only have we seen the proliferation of smartphones and tablets, but we have an entirely new wave of technological advancements in the works. The Internet of Things, autonomous cars, wearable tech, smart medical devices, machine learning, artificial intelligence, the cloud and 5G. Devices are getting smarter and more connected, and everything must be secure.

It’s no secret that the technology sector is experiencing tremendous growth, and investors in the sector have been handsomely rewarded. As you can see, the tech sector has outpaced the S&P 500 by more than two-to-one over the last three years: 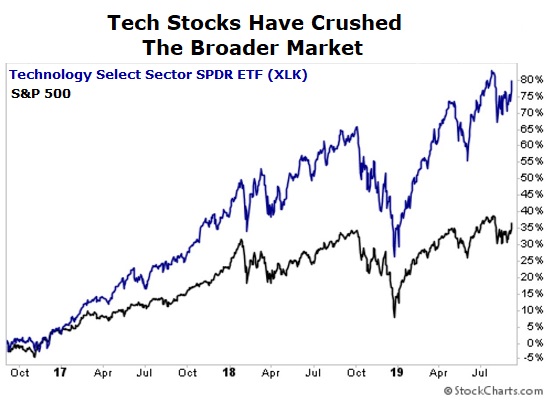 Individual tech stocks have done even better. For instance, Apple (Nasdaq: AAPL) has rewarded shareholders with a nice triple-digit return (105%) over the last three years. Amazon (Nasdaq: AMZN) has generated a 134% return over the same period. And Maximum Profit readers might recall we booked a near triple-digit return with Adobe (Nasdaq: ADBE) between April 2017 and October 2018, trouncing the 16% return he S&P 500 offered over the same period. 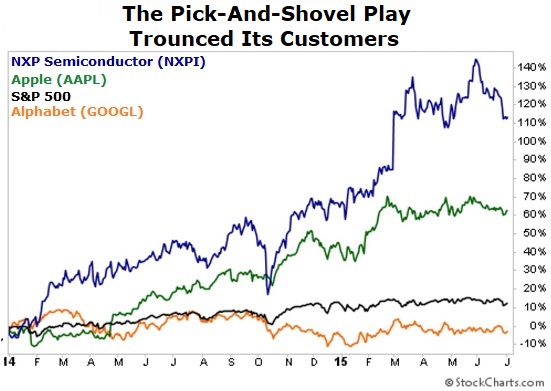 ​Investing in the big theme of a burgeoning sector can be rewarding. But most people pluck the low-hanging fruit from those sectors… the Apples and the Amazons of the world. And that’s fine. A triple-digit return in three years is nothing to scoff at. But if you’re willing to dig a little deeper (or reach a little higher on the fruit tree) the rewards can be even better.

Picks And Shovels, But For Tech
When it comes to big investment themes like the ones coming out of the tech sector at the moment, or the oil and gas sector when the fracking boom was taking off, there’s a dirty little secret for earning potentially even bigger returns… and that’s investing in the suppliers to those big, well-known firms that are usually offering the final product or service.

#-ad_banner-#This type of investing is sometimes referred to as the “pick and shovel” approach. The name comes from the fortunes made by those selling the tools used to mine for gold during the California Gold Rush. Regardless of whether the miner struck gold, the companies selling the picks and shovels made good money.

A great example of this was early 2014 when one of the big investment themes was the advancement in payment technology. We had Apple Pay, Google Wallet, PayPal, and ISIS Mobile Wallet all vying for supremacy in the market. With the use of near field communication (NFC) you could simply tap your credit card or mobile phone to pay for purchases.

While the majority of the focus was on Apple Pay and Google Wallet, our research team at StreetAuthority told readers that a better play on this theme was the “picks and shovels” firm NXP Semiconductor (Nasdaq: NXPI), which was providing the NFC technology to Apple and many other companies in the field.

Investors who took that advice not only crushed the overall market but topped the solid return of Apple over the next year and a half.

The story is similar during the start of the fracking boom. Instead of investing in the capital-intensive exploration and production companies, investors could have looked for firms that were providing the necessary tools and services to the booming oil industry.

For instance, the Maximum Profit system flagged Hi-Crush Partners (NYSE: HCR) in October 2013. The company provides the high-quality sand needed for fracking. We scored a 30% profit on the trade in roughly five months, five times better than the 6% gain the S&P 500 provided over the same period.

Along those same lines, we also profited from American Railcar Industries (Nasdaq: ARII), which transported the oil. That holding gave us a nice 62% return in one year on our money, more than four times the gain in the broader market.

Action To Take
In the last year, we’ve profited from the broader tech theme with our investments in Tower Semiconductor (Nasdaq: TSEM) and STMicroelectronics (NYSE: STM), which provide critical components to chip manufacturers. We booked gains of 110% and 98%, respectively, from these pick-and-shovel plays.

And this week we will try to capitalize once again on the pick-and-shovel theme, as the Maximum Profit system has flagged a company that is in… you guessed it, the silicon industry.

More specifically, it’s a global leader (#1 or #2 in many of the fields it serves) in the entire silicon and software spectrum. The industries and customers that it supplies are on a major growth trajectory, and this company is right square in the middle, helping to fuel that growth. It’s this “picks and shovels” sweet spot that has the company sporting a Maximum Profit score of 85.

If you’d like to get the name of this pick and learn more about how Maximum Profit can help you rack up more winners than you ever thought possible, then go here now.