Investors Who Apply This Simple Math Lesson Will Be Rich

Okay, that last one is a recent development. If you’ve followed the career of Shaq over the years, then you know he’s a man of many parts (hip-hop artist, TV commentator, and law enforcement officer are just a few more).

Well, it turns out there are several internet video clips (like this one) in which Shaq shares his favorite personal finance tip. And you may find it surprisingly simple… It came from a former business manager made a lasting impression on the young athlete by tearing a fake $100 bill in half and advising that one-half go into savings.

Such discipline can lead to riches over time. But the businessman confided a secret. The truly wealthy, he said, got there by going a step further. Of the remaining $50, they set aside half and invested it as well. The message: try to live frugally on just 25% of your income and put the rest away for later.

Of course, that math is a little easier when you have just signed a $40 million contract with the Orlando Magic. Still, even those of us who can’t slam-dunk a basketball would do well to take this lesson to heart. The more you save from each paycheck, the faster you’ll reach financial independence and a comfortable retirement.

The Power Of Compounding

You’d be surprised at the difference even a small increase in your withholding rate can make over time. 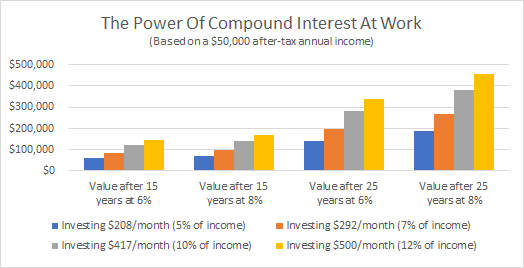 That’s the power of compound interest at work.

Deducting more money from our paychecks is always easier said than done. Many families live on a budget and can’t easily ratchet up contributions to brokerage and savings accounts without making cutbacks elsewhere. Instead of making a big lifestyle change, consider making small incremental adjustments over time – like increasing your withholding rate by one percent annually.

The good news is that most savers tend to do this anyway, perhaps in an attempt to catch up. According to Fidelity (which oversees trillions in retirement plan assets), the average worker in their thirties contributes 7% of their salary and has an average 401(K) balance of about $12,000. Those in their forties contribute 8% and have an average balance of $42,000. And by their fifties, the average worker sets aside 10% and is sitting on $174,000.

How You Can Start Compounding Today

The troubling thought to keep in mind, however, is that these average figures are inflated by upper-income workers with 7-figure account values. Median 401(K) values are substantially lower across all age groups. Remarkably, it has been estimated that as many as one-third of Americans aged 55 have zero retirement savings.

If you’re reading this, then you clearly have an active interest in taking charge of your financial independence. My advice: Be like Shaq and don’t touch your “play” money until your savings goals have been met first.

And if those proceeds are dutifully invested in dividend-paying stocks that send you reliable income each quarter, so much the better.

I can’t tell you how many stories I’ve heard from High-Yield Investing readers who use our picks to relentlessly compound their wealth year after year. Most of them are regular, ordinary folks. But the portfolios they’ve built up over time are anything but ordinary.

It just goes to show that compounding can work for investors of all walks of life — whether you have $1,000 to invest or $1,000,000, or more. What’s more, it’s not complicated. It’s all about finding strong dividend payers and letting them pay you year after year. But by simply taking it a step further and reinvesting those dividends, we’re pouring gasoline onto the fire of our compounding portfolio.

Over at High-Yield Investing, our subscribers have collected thousands of dividend paychecks. And many of our readers take those dividends and pile them right back into more shares. Others are at a stage in life where they’re ready to live off of the income. Either way, they’re creating wealth from some of the most conservative investments on the planet.

I want everyone to have the chance to understand just how simple this can be. That’s why, I’m offering my latest report to see how you can use our picks to start cashing in, too.

To get your hands on it right now, simply follow this link.