Is The Movie Business Really Dying?

I took the family to see the adventures of Buzz, Woody and the rest of the gang in Toy Story 4 recently. We weren’t alone — the fourth installment in the blockbuster franchise has already netted over $1 billion in global box office revenue. That’s the fifth billion-dollar release for the Walt Disney studio alone this year.

But what really struck me was the whole experience at the theatre and how it’s changed over the years. As an investor, this piqued my interest… I mean, is the movie business really dying after all? Could it just be that there’s an overlooked opportunity here for investors?

So I did some digging and recently shared my findings with my High-Yield Investing subscribers. And today, I’d like to share them with you…

A Whole New Experience
For starters, let’s go back to the theatre for a moment. Because what stuck me wasn’t just the people in the seats (power leather recliners, by the way) that caught my attention. It was the whole process leading up to the experience. No standing in line at the ticket kiosk outside (my wife reserved our seats in advance online). There are also mobile apps to order concessions, letting moviegoers skip the popcorn line.

#-ad_banner-#And the whole dinner and a movie thing… Well, you can do both in the theatre now. I’m not just talking about pretzels and hot dogs, either. Many multiplexes have gourmet menus featuring premium entrees such as Caprese chicken salad or an Asian steak and shrimp bowl delivered right to your seat.

Another new addition that I couldn’t help but notice… the installation of a bar/lounge area serving up wine, craft beer, and specialty cocktails. This is the 21st-century cinema experience.

These improvements require some upfront capital. But they have a measurable impact on the bottom line. On a nationwide basis, theatres upgrading to leather recliners have seen a 25% boost in attendance within 12 months of the renovation. Average returns on investment (ROI) have also been in the neighborhood of 25% — and 50% internationally.

And that’s not all. With revamped menus and full-service bars, many theatres have seen an uplift of 500 basis points or more in high-margin food and beverage sales as a percentage of total revenues.

4 Myths About The Movie Business
All this paints a different picture than what some in the media are spinning. You’ve probably seen the negative headlines. Don’t believe it.

Let’s dispel just a few of the more pervasive myths…

Myth #1: Theatres hold little appeal for the younger generation.
Fact: The average teenager attends 5.1 movies per year versus 3.5 for those aged 25 and over. This demographic is actually the most avid customer base.

Myth #2: Speedy internet video downloads will lead to empty theatres.
Fact: Studies show a positive (not inverse) correlation between video streaming and moviegoing. Among the most active moviegoers (nine or more annually), 31% spend 15+ hours per week streaming videos on their phone or computer, versus just 15% who spend 1-3 hours. Watching movies at home and in the theatre are not mutually exclusive.

Myth #3: The number of moviegoers is on the decline.
Fact: The number is increasing, both in absolute and percentage terms. A decade ago, there were 229 million people who attended the theatre at least once per year, or 68% of the U.S. population. In 2018, 263 million people saw a movie, about 75% of the population.

Myth #4: Movies are highly discretionary and revenues will dry up in an economic slump.
Fact: The numbers simply don’t bear this out. During the recession of 2001, box office revenues increased 9%. They rose again (10%) during the slowdown of 2009.

The barrage of negative articles has deterred investor interest. And the drumbeat gets louder with every technological advance. We saw this when Tivo launched in 1999, when critics questioned who would pay to drive across town when there was a device that could record movies in the comfort of your own living room… with DVD players in the early 2000s… the introduction of Netflix video-on-demand streaming in 2007, and Amazon Prime video service in 2011.

But for the most part, the statistics tell us something much different. They haven’t replaced the premium big-screen experience.

Separating Myth From Fact
These home entertainment breakthroughs have barely been more than speedbumps slowing the industry’s steady long-term growth. Domestic box office revenues hit $7 billion in 1999, topped $9 billion in 2002, surpassed $10 billion in 2009, and eclipsed $11 billion in 2017. Over the past 20 years, 14 have brought new record highs.

That includes three of the last four. 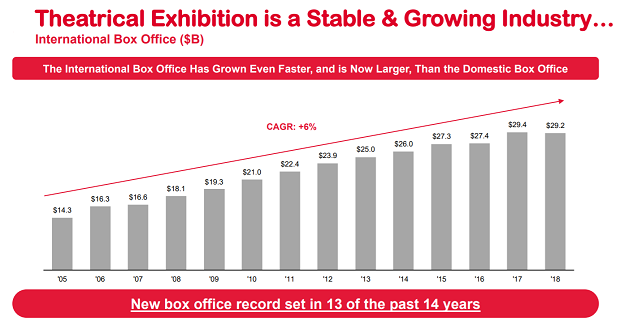 And that’s just in the United States. International box office revenues are growing twice as fast (6% annually) and are rapidly approaching $30 billion, about three times the size of the domestic market. Overseas, the industry has set a new record high in 13 of the past 14 years.

Many naysayers acknowledge this trend but insist that the growth is strictly due to rising ticket prices rather than more crowded theatres. It’s true that ticket prices have marched higher, but roughly at the same price as inflation. As far as value proposition goes, the cost for a family of four to take in a movie is still just a fraction of what is spent on other entertainment options such as sporting events, concerts and theme parks.

In any case, attendance levels have been relatively stable. There was a low in 2011. Since then, attendance has outpaced that level in five of the past seven years. And 2018 was one of the strongest in decades. U.S. theatres welcomed 1.30 billion visitors — a healthy increase of 65 million, or about 5%.

Those visitors paid an average ticket price of $9.11, driving box office revenues up 7% to $11.9 billion — another all-time high. That’s a lot of record-breaking for a “dying” industry.

Action To Take
When Cinemark (NYSE: CNK) launched its MovieClub program in December 2017 giving members one free ticket and a 20% discount on snacks for just $8.99 per month, it didn’t surprise me to see subscription revenues start rolling in. The company has since signed up 800,000 members. It has also delivered 50 consecutive quarters of rising food and beverage sales per patron. And perhaps most impressive, it has boosted dividends by 36% over the past five years (despite being in a peak CapEx spending cycle), lifting the yield to a respectable 3.7%.

I think it would make a fine portfolio addition. But I recently told my High-Yield Investing subscribers about a more compelling opportunity.

Out of fairness to them, I can’t share the name of this pick with you today. But if you want to jumpstart your retirement nest egg and collect yields as high as 11.2%, then I encourage you to check out my latest report. If you want to spend less time worrying about bills and more time doing the things you want, then you can’t afford miss it.