This Strategy Outperformed The Market For 83 Years

Today I want to tell you about an investing strategy that defies logic. It shouldn’t work based on everything you’ve learned about the stock market.

Yet it does. In fact, for over half a century, investors and traders have used this strategy to produce unparalleled results.

What’s more, what I’m about to show you can be used as part of any general investing strategy — regardless of whether you’re focusing on income, growth, blue chips, small caps or commodities.

Longtime readers might already be familiar with relative-strength investing. We’ve talked about it before in previous StreetAuthority articles. But for those who need a refresher, allow me to provide a brief recap.

Relative-strength investing is simply a type of momentum investing. It involves buying the best-performing stocks (relative to the market) and holding them until their momentum changes course.

To most investors, especially those considered value investors, this strategy probably sounds ridiculous. After all, most people have heard the phrase “buy low, sell high.” Since relative-strength investors buy stocks that are already outperforming today, many view this style of investing as counterintuitive.

Most investors have been trained to think that the stocks with the most upside potential are those that are the most “undervalued.” The definition of undervalued varies by investor, but normally people define it using metrics like low price-to-earnings ratios, price-to-book ratios or discounted price-to-sales values.

The problem is that this kind of approach leads investors to pass up the market’s best-performing stocks in favor of the ones doing the worst. Since underperforming investments usually sport the “lowest valuations,” we tend to think these stocks are the more attractive buys.

Metaphorically speaking, this is like abandoning a luxury yacht in favor of sailing around the world in a leaky shrimp boat because buying a ticket on the shrimp boat can save you half the cost of your trip.

Don’t get me wrong, I like saving money. But I’ll gladly take the yacht if it means I’m going to enjoy my vacation and get back home alive.

Unfortunately, when it comes to investing, most people don’t look at stocks like that. They see a great-performing company with an average or premium valuation (the yacht) as riskier than an underperforming stock with a low valuation (the leaky shrimp boat).

One of the best studies on this phenomenon was done by the asset-management firm AQR Capital Management. They looked at U.S. stocks going all the way back to 1927. What they found was that at any given time, the stocks that were outperforming 80% of the market continued to outperform for at least the next 12 months.

The same thing goes for the underperforming stocks. The bottom 20% of performers continued to underperform over the same period.

For example, AQR found that using a relative-strength strategy, the firm was able to outperform their benchmarks in nearly every investing category (including mid caps, blue chips and small caps).

What’s more, James P. O’Shaughnessy, author of “What Works On Wall Street,” discovered that using a relative-strength-based system would have beaten the market by an average of 3.7 percentage points per year over a period of 83 years.

The market would have only turned that $10k into about $38 million — nearly 15x less than a relative-strength-based system. 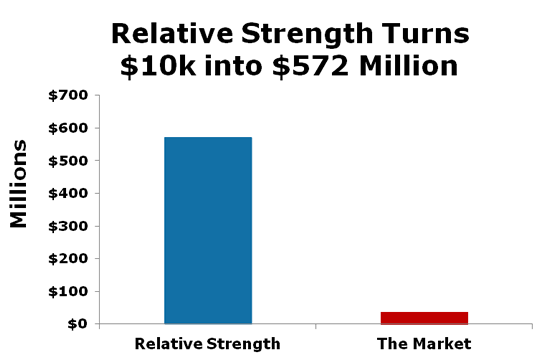 With that kind of track record, it’s hard to deny the benefits of relative-strength investing. Yet as powerful as relative strength is by itself, it’s been taken to another level by my Maximum Profit system.

How We Use RS To Profit

The Maximum Profit system leverages the power behind the relative-strength metric along with a proprietary, fundamental indicator.

The combined values of these two numbers yield a stock’s Maximum Profit score. The higher a stock’s “MP score”, the better its chance of delivering blockbuster gains.

Take Lannett Company, Inc. (NYSE: LCI) for example. My system originally tagged Lannett as a buy back in July 2013, when the stock was sporting a Maximum Profit score of 87.

Part of that score was based on the stock’s relative-strength rating, which at the time was 98 — meaning the company was outperforming 98% of the overall market. The other piece of LCI’s Maximum Profit score comes from our proprietary fundamental indicator, which was then 81.

Not only did the Maximum Profit system trigger buy signals, but more importantly, it alerted investors exactly when to sell. And after about 13 months, my system triggered a sell signal, telling us it was time to lock in our 181% gain. 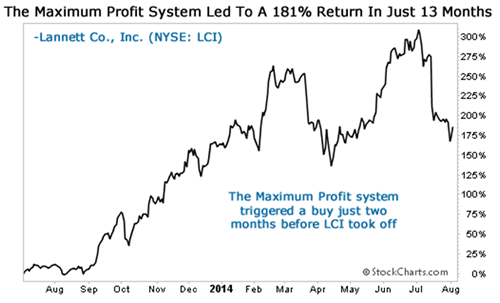 Bottom line, momentum investing can be profitable. Very profitable. But to reap the best results, you need a dedicated system with clear buy and sell signals working for you…

If you’d like to learn more about how the Maximum Profit system works, including how you can separate the strongest stocks from the crowd, then I invite you to check out my latest research here.