The Shocking Signal My System Is Flashing Right Now…

I’m not sure what it is about October, but it has historically been a spooky month for investors.

The haunting traces back to the Wall Street Crash of 1929, a four-day collapse of stock prices that began on October 24. The Dow Jones Industrial Average dropped 25%, making it the worst such decline in U.S. history.

And just last year you may recall that the market peaked at the end of September. A fourth-quarter slide began in October, which ultimately  set stocks back about 14% through December.

With events like these, it’s easy to see why the month of October carries a negative connotation.

In truth, though, outside of these major declines, the month has historically been a good one for markets. In fact, according to the Stock Trader’s Almanac, October is the second-best month of the year for the S&P 500 and the Dow Jones Industrial Average in terms of performance.

What My Proven System Is Telling Us Now 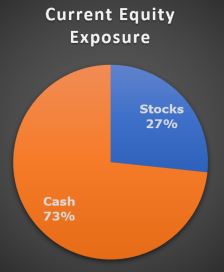 Regardless of what the market throws at us this month (or any month), I’m confident that my Maximum Profit system will help guide us into profitable trades, or move us to the sidelines and stockpile cash until it’s ready to be deployed. That’s historically what it’s done for us…

#-ad_banner-#Before launching Maximum Profit, we put it through vigorous backtesting scenarios to ensure its profitability. Backtesting uses historical data to assess the viability of a trading system. One of the traits we noticed throughout testing was the system’s innate ability to move us in and out of cash.

For example, in the backtest, the system went completely to cash before the market bottomed in March 2009. It then quickly moved back into equities after the bottom.

Once the system went “live” in 2013, it kept us in 50% cash and 50% stocks as the market worked through a pullback. Then, it quickly issued a “Buy” alert as the market resumed its upward trend. It reacted similarly the following year when we saw a quick and sudden selloff in October.

Maximum Profit has proven time and time again that it will cycle us into what’s working and out of what’s not. That could be cash or certain sectors. For example, we invested heavily in the energy sector in 2014 and booked several winners. But then the system rotated us out of energy as oil prices plummeted, bringing the sector’s momentum to a halt.

More recently, we’ve enjoyed gains from the tech sector, as that’s been where most of the tailwinds have been.

Understand that no system can predict what the market is going to do tomorrow, next week, next month or next year. I don’t want to lead you to believe that we won’t feel any pain from the next market meltdown. We will. But ideally, as the system moves us into cash, it will soften the blow of a market correction. At the same time, we’ll be raising cash to deploy back into the market when the time is right.

Remember, booking a loss isn’t a failure. You win the battle by keeping the damage minimal. You’ve avoided letting it swell into a larger loss. It’s difficult to recover from a large loss. A couple of big losses will decimate the overall return of your portfolio.

Here’s the reason I bring this up… Right now the Maximum Profit system has us at only 27% exposure to equities and 73% in cash.

Despite the wonderful year — the S&P 500 is up 16% since January 1 — the system has recently rotated us into more cash. It’s still finding stocks that are poised to continue delivering gains, but it has clearly signaled that we should have a good amount of cash on hand. You should, too. It will help us weather the volatility that we’ve been seeing in the market the last couple of weeks.

We will continue to keep our losses small, and book profits when our sell signals are hit. In the meantime, we will have a grip of cash to deploy should the market make a 180 and march for new highs.

Editor’s Note: Looking to make more income in a faster amount of time? That’s where the “profit calendar” comes in…

Our colleague Jim Fink has made himself a wealthy man with a system that allows you to collect payments every Thursday, similar to a paycheck. And now he’s sharing his secrets…