There’s some much-needed good news to report for shareholders of one of America’s most storied companies.

Shortly after sealing the $34 billion acquisition of Red Hat back in July, IBM (NYSE: IBM) predicted the open-source software provider would generate $350 million in revenues in its first full post-merger quarter. The actual number: $371 million.

That’s the good news. For those who may not be familiar, the Red Hat acquisition is one of a number of moves Big Blue has made in recent years to remake itself.

The bad news: Unfortunately, it wasn’t enough to offset weakness elsewhere, most notably in the core global technology services division.

Can Big Blue Finally Turn It Around?

Overall sales for the period dipped 4% to $18 billion. That was about $200 million below expectations — and the fifth consecutive quarterly decline.

On the positive side, adjusted earnings of $2.68 per share came in ahead of expectations for the 9th straight quarter. But the investment community remains fixated on the persistent top-line slump. This has dogged IBM as the company transitions from legacy mainframe computer servers into cloud services, cybersecurity, artificial intelligence, and other 21st-century arenas.

In fairness, the revenue picture last quarter was muddied by divestitures and foreign currency translation. And Red Hat is certainly moving the needle, with revenue growth accelerating to 19% from 15% the prior quarter. But the rest of the business looks lackluster, which is why several analysts have pared back their price targets recently.

IBM shares have retreated from $143 last issue to a recent close near $137, giving back some of their 25% year-to-date gain. 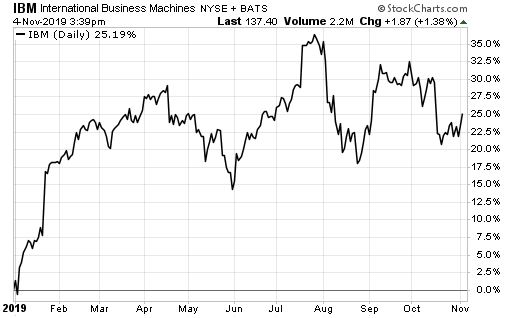 Short-term investors might find this a good time to cash out and walk away. Admittedly, I gave some thought to it myself. But as I recently told my Daily Paycheck premium subscribers, pulling the plug here and booking our gains might be a bit premature. Companies this size don’t turn on a dime, and I am willing to give management more time to execute on their turnaround plans.

It’s easier to be patient knowing we are pulling in a dividend yield of 4.8%. And next year, the company will become a Dividend Aristocrat — joining the exclusive list of companies that have raised payouts for 25 straight years or more.

And there are numerous bright spots with the business, too. Among others, IBM just landed a multi-year partnership deal with AT&T (NYSE: T) that will see the two companies collaborate on new technology platforms in the 5G era. The telecom giant has agreed to make IBM the preferred provider of cloud services for its enterprise customers.

Meanwhile, IBM still has its colossal patent portfolio, research labs, the world-famous Watson super-computer and cognitive platform, and an urgent focus on evolving for the future.

There is softness across key business lines, and the jury still out on how long it will take Red Hat to push overall revenues meaningfully forward. On the other hand, IBM has chalked up $20 billion in cloud-related revenues over the past 12 months alone.

IBM has also taken great strides to improve its balance sheet, eliminating nearly $7 billion in debt over the past three months alone. It has also reaffirmed forecasts to generate $12 billion in free cash flow this year — more than 100% of reported GAAP net income.

With that said, I think it’s prudent to cautiously consider IBM a “buy”. This dip may prove to be a good entry point for investors who haven’t already bought shares.

P.S. My subscribers over at The Daily Paycheck are happy to get paid nearly 5% to wait for IBM’s turnaround. That’s because we know all about the power dividends can have on a portfolio.

It’s how we turned a portfolio with an initial value of $200,000 into one worth $405,442 at last count. Most of that came from dividends — which are reinvested back into buying even more shares, helping our nest egg steadily grow with each passing day, like clockwork…

With a system like The Daily Paycheck, you’ll no longer have to be anxious about retirement. You’ll generate more and more income every month. And when retirement comes, you can just flick off the dividend reinvestment switch and start living off the income. In fact, you could have an extra $1,701 per month in your pocket if you invested alongside us. Go here to learn how to get started…