The Big Problem Of The Food Delivery Business

Shares took a beating and closed the day down 43%. 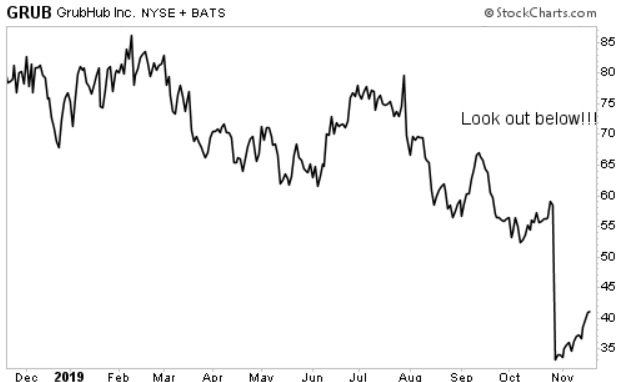 What in the world could have possibly happened to justify such a massive decline?

Well, the short of it is that the massive growth days of the food-delivery industry are likely behind it.

For the third quarter, GrubHub generated $322 million in revenues, a 30% year-over-year increase. However, that figure fell short of analyst estimates who were on average expecting sales of $330 million. Net income of $1 million, or $0.01 per share, was a massive decrease from the $22.7 million, or $0.24 per share it reported in Q3 2018.

To make matters worse, management lowered sales guidance for Q4. But that’s only part of the story…

Many times, large moves to the downside in a stock’s share price based on a single quarterly earnings report is a major overreaction by Wall Street. But in GrubHub’s case, it’s an industry-wide issue.

The Most Brutally Honest Shareholder Letter You May Ever Read

Before I go any further, the company released a shareholder letter that is worth a read. Not only is it an excellent educational overview of the online food delivery business in general, it’s also brutally honest about the challenges GrubHub is facing. In fact, I’m going to feature a few key passages before delivering my take because what management had to say is just so spot-on.

First, management gave a brief overview of the business up to this point…

It is widely believed that the total market for takeout in the United States, including pickup and delivery, is greater than $200 billion annually. Online sales of takeout have exploded over the last decade as the ease of ordering, diversity of choice, control and transparency for the diner are all far superior to the analog “menu in the drawer.” Online ordering has been growing as geographic coverage has expanded and also as awareness within all geographies has increased. An additional source of growth has come from diners choosing to order delivery and takeout over other options for meals, including cooking.

While there have been other online ordering platforms around during every one of the 15 years we have been in business, there were always so many diners who had never ordered online that the competitive impact to our business by other online players had been negligible. Given the billions raised and spent by our peers, this apparent lack of a competitive impact has always been a little surprising to us.

What comes next in the letter is fairly typical of what you might expect. Management rightfully points to their careful approach to growing the business over the years through several metrics.

It wasn’t until just recently that a “new entrant” (read: Uber) into the space upended everything. At first, it seemed to open up new growth opportunities for online food delivery as a whole. As Uber leveraged its system for food deliveries, the number of “new diners” exploded across the entire industry. But this obscured an important change in the restaurant delivery business: GrubHub noticed that the ordering frequency of new diners within the system wasn’t “maturing”. This simply means that people were joining GrubHub to try it out but weren’t ordering as frequently as new customers had in the past.

This prompted the following stunning commentary from management…

We spent a fair amount of time digging into the causes of these dynamics. What we concluded is that the supply innovations in online takeout have been played out and annual growth is slowing and returning to a more normal longer-term state which we believe will settle in the low double digits, except that there are multiple players all competing for the same new diners and order growth.

Furthermore, we believe online diners are becoming more promiscuous. For years, we saw in our data that a Grubhub diner was extremely loyal to our platform. However, our newer diners are increasingly coming to us already having ordered on a competing online platform, and our existing diners are increasingly ordering from multiple platforms. We find this “sharing” to be greatest among our newest diners, in our newest markets, but believe it is happening to some degree throughout our diner base. We believe this competitive dynamic had a 300+ bps impact on our growth rate for the third quarter.

In short, management believes that the accelerated overall industry growth is now in the rear-view mirror. It also believes the next leg of growth will play out over the next decade, with multiple players (Uber Eats, Door Dash, Postmates, etc.) all competing for the same new customers.

In other words, increased competition and a slowing overall industry won’t provide GrubHub with the tailwinds that it once had.

In this instance, I don’t think the selloff was an overreaction. This is a market that has low barriers to entry, no competitive advantages, and little attraction for customer loyalty.

The consumer doesn’t care if their food is delivered with GrubHub, Postmates, or Door Dash, so long as it gets delivered. No loyalty means that it really comes down to price, and as competitors lower prices to attract customers, it squeezes margins and profits. This is nice for the consumer but terrible for shareholders.

With the increased competition and maturing industry growth, GrubHub is no longer a game-changing growth story per se. Don’t get me wrong, it will still be a market leader and continue to see growth, but not at the clip that it once did.

In short, it’s best to step away from GrubHub at this time and put our money to work in other, ideally better, opportunities.

P.S. When my friend Jim Fink walked away from his career as a lawyer, his colleagues thought he was crazy. But now, instead of 90-hour workweeks, he’s making winning income trades for thousands of dollars in a matter of minutes. Now, he’s making more than he ever did as a lawyer, thanks to his “IVL” system. (It turns out his colleagues were the crazy ones.)

For a limited time, Jim is showing a select group of investors this system — the same one that has delivered winning trades 100% of the time so far this year. Go here now to get the details…