When you look back on certain things in life, like industry trends, you often wonder how you didn’t see it coming. Or perhaps you did see it coming but didn’t realize the effect it would have on our lives.

It could be something small that we take for granted like shifting your vehicle into 4-wheel drive with the click of the button, while you’re still driving. Or the remote control for a television. Then, of course, there are the bigger trends that have altered our lives in greater ways, like the internet, cell phones (now smartphones), airplane transportation, healthcare… the list goes on.

Some of these larger trends have even spawned a number of new industries within that larger trend. Take the internet for example. Because of the evolution of the internet, software-as-a-service (SaaS) has ballooned into its own massive industry.

A more prominent company in the SaaS industry is Salesforce.com (NYSE: CRM). The customer relationship management firm shook up the software industry by using a subscription-based method to sell its software. Investors who got in on this trend have done very well… 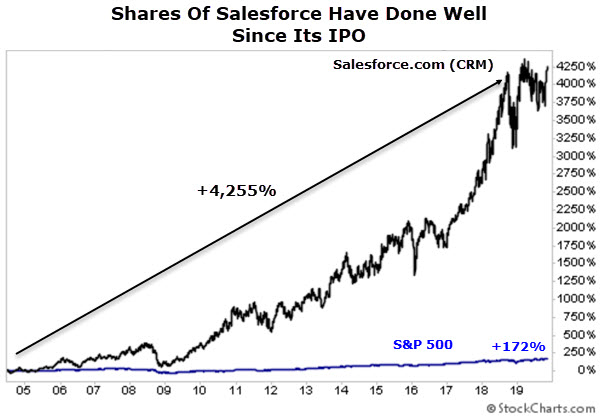 I recently made the case that buy-and-hold investors should make a place for solid growth stocks in their portfolio. After all, with the right portfolio balance, sometimes all it takes is one triple-digit winner to fundamentally change your performance for the better in a given year.

Not to mention, as you can see from the chart above, catching just one of these trends could be life-changing financially.

That was part of the thinking behind my recommendation of The Medicines Company (Nasdaq: MDCO) in my Maximum Profit premium service back in October.

MDCO is a biopharmaceutical company that’s fighting the number one cause of death in the United States and worldwide: atherosclerotic cardiovascular disease. In other words, The Medicines Company is battling high cholesterol, which raises the risk of heart disease (the leading cause of death) and stroke (the fifth-leading cause of death). Talk about major trends…

Currently around 100 million people worldwide are treated with lipid-lowering therapies, predominantly statins (like Lipitor) to reduce LDL-cholesterol, known as the “bad” cholesterol. Despite the effectiveness of statins, cardiovascular disease remains the leading cause of death.

MDCO is developing inclisiran, which specifically inhibits production of a key protein that controls LDL-cholesterol. Also key: Inclisiran is taken by injection rather than pill form.

Inclisiran has been working its way through the three-phase FDA approval process. It’s seen wonderful results so far. For instance, in its Phase 2 study, the administration of inclisiran by Day-90 lowered the average LDL-cholesterol by an average of 52.6%, and up to 81% at Day-180. In September, MDCO announced that it had completed Phase 3 of the process and will submit inclisiran for regulatory approval in the United States this quarter and in Europe in the first quarter of 2020.

The Medicines Company went all-in on inclisiran. And it paid off. On November 25, MDCO announced that is being acquired by Swiss drug giant Novartis for a 24% premium. So while my readers and I didn’t find the next Salesforce, we did book a quick 64% gain in just under two months. 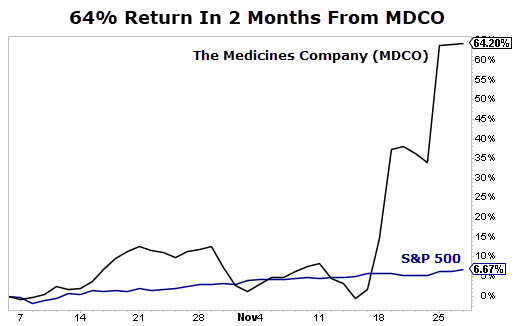 The gains we booked from MDCO prove that doing a little extra homework to find a worthy under-the-radar growth stock can be well worth the effort. And while I wouldn’t recommend MDCO today, here is the bigger takeaway…

As I said in my previous article, just one or two of these homeruns a year can really add some extra juice to your portfolio over time. And a well-balanced portfolio will soften the blow whenever an aggressive growth trade doesn’t pan out.

Most individual investors are lucky to nab a quick triple-digit gain once or twice in their life. And there’s a good reason for that. To extend the baseball analogy further, look at it this way… If you want to hit more homeruns, you need to have more plate appearances. And that’s especially true if you ever want to have a chance at a grand slam and nab the next Salesforce – a 10-bagger that will change the course of your fortunes forever.

And speaking of quick gains… My colleague Jim Fink just told me about a “weird” indicator that just pinpointed an opportunity for gains of 100% in the next 10 days or less. In just a few days, the full details will be released to a small group of investors.