Is This 10% Yielder Worth The Risk?

It’s been a downhill slide for AMC Entertainment Holdings (NYSE: AMC) over the past couple months. Fortunately, underlying business trends have been moving in the opposite direction.

AMC welcomed 87.1 million visitors to its theatres last quarter – a record. Even more impressive, it managed to push through a 3.3% hike in average ticket prices, while its peers only hiked by 0.65%. The company continues to dramatically outperform the industry average by several hundred basis points in terms of attendance growth and revenue growth per screen.

#-ad_banner-#More of those guests lined up at the concession stand for popcorn and beverages too. Food and drink revenues per patron rose 5% to hit a new third-quarter high.

So, what does all this mean for revenue? Well, AMC took in $1.32 billion over the past three months, a healthy increase of 8%. After adjusting for a non-cash accounting change, EBITDA rose 33% from a year ago to reach $157 million. Of course, that figure excludes interest expense, which can’t just be ignored (AMC paid $85 million in interest for the period). But operating cash flow has improved sharply as well, rebounding to $56 million from just $2 million a year ago.

I suspect the market is concerned with AMC’s renovation spending, which admittedly eats up a lot of capital. Maintenance expenditures totaled $32 million last quarter, and growth expenditures soaked up $88 million. That consumes most of the cash flow, leaving dividend distributions ($20 million quarterly) on thinner ground.

To be blunt, I don’t think the company can maintain both if there is a sustained industry slump. That’s something to consider. Fortunately, it’s not an issue right now. In fact, box office revenue set a record $11.9 billion last year, and 2019 could be even stronger thanks to year-end blockbusters like Frozen 2 and the final installment in the Star Wars saga.

As they say, a rising tide lifts all boats. But AMC is also outrunning the industry by a wide mark. The spending I mentioned earlier has paid for upgrades like luxury reclining seats, bar/lounge areas, and other features. These are attracting customers in record numbers – and they’re paying premium prices.

AMC has 11,000 screens worldwide. And attendance per screen has outpaced the competition for six straight quarters. 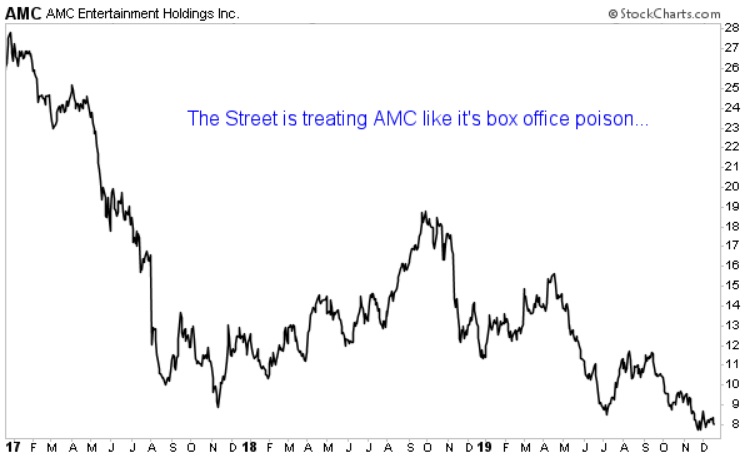 The company took on a sizeable amount of debt to acquire Carmike Cinemas. Some may worry that dividends might have to be sacrificed to repay lenders. But there are no material maturities due for several years. Until then, AMC has at least three factors working in its favor.

1) Renovation allowances from landlords, sale-leaseback agreements, and other funding sources give AMC more flexibility than would otherwise appear.
2) The heavy spending phase is tapering off and winding down. Capital expenditures were a whopping $589 million in 2018. That budget is expected to be pared down to $415 million this year and $300 million next year. That’s an extra $115 million left on the table for dividends.
3) Cash flows have been expanding at a powerful 19% compounded annual growth rate (CAGR) over the past five years. AMC generated $300 million in free cash flow last year, while dividend obligations only consumed about $80 million of that.

As with any 10% yielder, AMC carries some risks. But I think they are more than offset by the potential rewards.

This was a $30 stock a few years ago. Today, it can be bought for just $8 – less than the cost of a single movie ticket. Yet, theatre attendance, ticket prices, and EBITDA have never been stronger in the company’s history.

Not only is AMC steadily gaining market share here in the U.S., but it also has a head start overseas, where box office revenues are growing twice as fast. Recent operating improvements are encouraging. Short sellers seem to have the upper hand right now, but I think they’ll be proven wrong in the end. Still, potential investors should evaluate their risk tolerance and may want to wait for the stock to stabilize before taking a position.

P.S. If you want to jumpstart your retirement nest egg and collect yields as high as 11.2%, then I encourage you to learn more about my premium newsletter service, High-Yield Investing. If you want to spend less time worrying about bills and more time doing the things you want, then you can’t afford miss it.

Check out my latest report for more…