The State Of The Housing Market — And How You Can Profit

Homebuilders from Georgia to California haven’t been this busy in well over a decade.

Housing starts have quickened for five straight months and are now running at an annualized pace of 1.3 million units. That means more than 100,000 new homes are going up each and every month. While residential construction rates can be choppy from quarter to quarter depending on weather and other factors, this steady upswell is gaining strength.

Building permits (a good indicator of future construction) have climbed 14% from a year ago to reach 1.46 million. That’s a new 12-year peak.

We haven’t seen numbers this strong since before the financial crash. The question is, can the gains continue?

To understand where the housing market is headed, you first have to see just how far we’ve come.

The State Of The Housing Market

During the last market boom in the first half of the 2000s, more than two million new homes were going up each year (double the current pace). Fueled in part by rampant speculation, easy money, and soaring real estate prices, lenders and builders both got caught up in the frenzy and over-indulged.

It was great while it lasted. Then the party ended, and everyone woke with a painful hangover. In classic boom-to-bust fashion, fields of unsold homes built on “spec” sat vacant, prices collapsed, and building activity ground to a halt. It was an ugly time of upside-down mortgages, bank foreclosures, and distressed real estate short sales.

Banks that previously lent money to borrowers with minimal income and shaky credit were suddenly forced to tighten their underwriting standards. And aggressive homebuilders (those who weren’t wiped out) took a cautious turn as well, investing in fewer lots and only building what the market could support.

By 2010, annual housing starts plunged to a mere 550,000. That’s an unprecedented decline of roughly 75%. Then began the long, slow recovery process.

Fast-forward to today, and housing starts have finally reached 1.3 million – a new high-water mark for this cycle. But we still aren’t back to full strength.

For half a century leading up to the crash, builders completed roughly 1.5 million new homes a year on average. Smoothing out the ups and downs, that’s about what it took to keep pace with demand. So we’re still running below average.
And that’s just in absolute terms. Consider this: the population of the United States stood at 226 million in 1980 versus 330 million today. Clearly, a growing population requires more housing. On a per-capita basis, housing starts are running at less than half the levels of decades past. 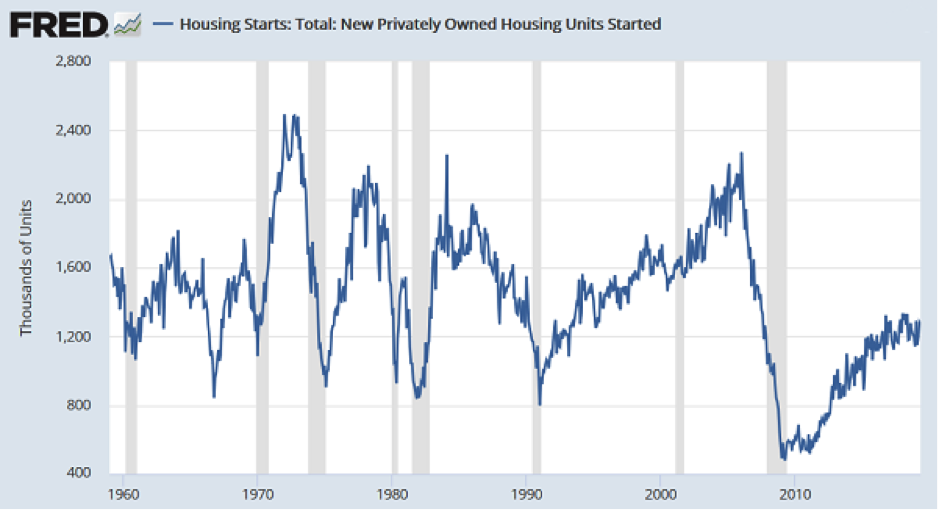 There are several obstacles keeping growth in check. The first is a shortage of laborers. The availability of low-cost undeveloped land is also a factor. There are fewer surviving builders, too… Membership in the National Association of Home Builders has fallen from 240,000 in 2007 to 140,000 today. Those that are left blame stringent building codes and burdensome regulations for keeping the industry from reaching full potential.

Perhaps the biggest impediment is one of simple economics. Inventory levels are well below historical norms, and the shallow supply has driven home prices beyond the reach of many buyers. Affordability is an issue for both new construction and existing homes. Nationwide, there are 1.77 million existing homes for sale today. And sellers are closing on 5.46 million per year at the current pace. That means unsold inventory is equivalent to a slim 3.9-month supply, which is exerting upward pressure.

The National Association of Realtors reports that median home prices have risen for 92 straight months to reach $271,000.

The market is taking notice of all this. After suffering a dreadful 2018, investors in homebuilder stocks are finally being rewarded. The SPDR S&P Homebuilder (NYSE: XHB) ETF has posted a hefty 43.8% return for the year. 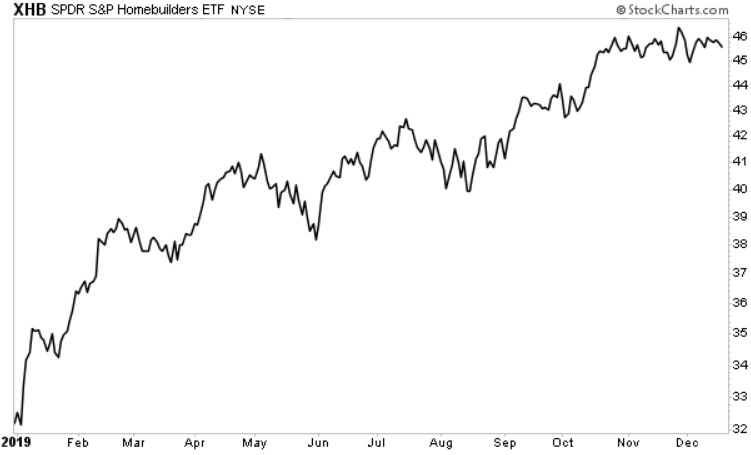 All of this to say that, yes, homebuilders have had a good run. This sector may be rolling along at a 12-year high – but we’re still running at half-speed.

Plenty Of Growth Ahead

What will it will take to get caught up? I’ve seen one comprehensive study that calculated we need to build another 4 million homes to reach normal levels. Using a more conservative approach, real estate website Zillow estimates that national homebuilding has lagged by 2 million homes over the past decade.

Whatever the true number, homebuilders have good reason to be optimistic over the coming years.

Jobs are abundant (over 5 million created the past two years) and wages are rising. At the same time, mortgage rates have sunk back to near historic lows after a string of Fed rate cuts.

Average 30-year mortgage rates nationwide currently stand at 3.75%, versus 4.95% last November. Cheaper borrowing encourages many who may have been on the fence to pull the trigger. Plus, millions of Millennials who had previously rented or cohabitated with family are now buying their own homes.

First-time buyers currently account for nearly one-third of existing home sales. And they’ve been a key driver for builders as well. PulteGroup (NYSE: PHM), reports that the biggest source of demand has been from first-time buyers, whose orders jumped 39% last quarter.

We’re hearing similar things from Lennar (NYSE: LEN). The company built 12,700 new homes last quarter but received orders for 14,500 more. It’s received orders faster than they can be filled – driving the backlog up to 19,061 homes worth $7.7 billion.

As you might expect, stocks like LEN and PHM have enjoyed nice gains. Aside from LEN and PHM, other homebuilder stocks worth considering include DR Horton (NYSE: DHI), Toll Brothers (NYSE: TOL), and KB Home (NYSE: KBH).

Unfortunately, homebuilder stocks aren’t known for their dividends, mostly because cash flows can be cyclical and unpredictable. One of the most reliable has been Pulte, whose dividends have maintained or increased for five straight years. It’s a solid candidate, but with a yield of 1.2%, it doesn’t generate enough income to merit inclusion in the portfolios of my premium newsletters.

So while I’ve recommended a different route for my subscribers, just know that there’s plenty of room for growth in this space. And many of the homebuilders are undervalued by traditional metrics – despite the nice multiyear run they’ve had. Any of the names mentioned above should be researched further. They could deliver solid gains in the months to come.

Editor’s Note: What if I told you that you could legally ROB more than 18,000 legal marijuana businesses in America?

It’s not as crazy as it might sound. In fact, it’s perfectly ethical – these businesses are practically begging you to do it. And it could put thousands of dollars in your pocket with one click of the mouse.

Go here to learn all about it…