Hey Siri, How Do I Invest In Voice AI?

When Apple (Nasdaq: AAPL) unveiled the “personal assistant” Siri in its iPhone in 2011, it was just the beginning… What was a basic glimpse into the field of conversational artificial intelligence (AI) at the time has now become commonplace. Today, the use of speech-based assistants has flourished inside our homes, including Siri, Amazon’s Alexa and Google Home.

And it’s only going to bet bigger.

What many don’t know is that this tech has also flourished in the business world.

A lot of that is thanks to Nuance Communication (Nasdaq: NUAN).

Nuance is a pioneer and leader in the conversational artificial intelligence space. However, we’re not talking about the basic personal assistants like Siri or Alexa, but rather more sophisticated AI that can be utilized by large corporations like hospitals, banks, telecommunications, retail, and the government.

Without getting too deep into the details, suffice it to say that Nuance’s tech is used by police stations, hospitals, banks, telecommunications companies, automakers and more. Simply put, the stakes are high for Nuance’s customers. And if you’re going to use a technology like speech recognition to replace a human being, you better get it right…

Its biggest market segment comes from the healthcare industry, where it generated $950.6 million in revenue during fiscal 2019, representing 52% of total revenue. The Enterprise segment pulled in $510.8 million, or about 28% of total sales, while $306.6 million, or 16.8% of sales, came from its Automotive segment.

#-ad_banner-#This segment provides virtual assistants and connected services for vehicles. Its customers include all the large automobile manufacturers like Ford, Daimler, BMW, Toyota, and Volkswagen. I should mention, though, that Nuance spun off its Automotive segment into its own independently traded company October 1, 2019. That company is called Cerence, Inc. (Nasdaq: CRNC).

All these segments combined for total sales of more than $1.8 billion for fiscal 2019. Operating income for the year was $222 million while net income was $114 million.

On November 20, the company announced fourth-quarter results that topped Wall Street estimates. Net income of $108.1 million, or $0.37 per share, beat analysts’ expectations of $0.25 per share.

It’s worth noting, however, that this mid-sized company ($5.1 billion) carries a hefty debt load of more than $1.9 billion compared to $748 million in cash on hand. The company has been working on paying down that debt, but carrying a large debt load can hamper reinvestment back into the company. 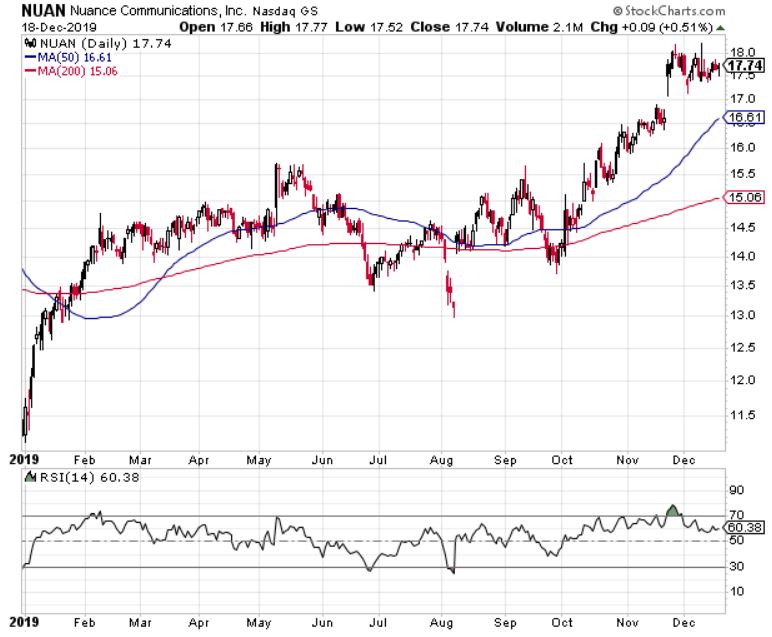 As you can see in the chart above, shares popped on the recent earnings news — and the stock has been on fire all year. I think the momentum is set to continue. Part of the reason for this expectation is because it was recently reported that hedge fund manager Seth Klarman of Baupost Group had started a new position in Nuance. While it doesn’t mean that the stock will be a massive winner, it’s nice to know that a well-run hedge fund like Baupost Group is bullish.

Editor’s Note: What if I told you that you could legally ROB more than 18,000 legal marijuana businesses in America? It’s not as crazy as it might sound. In fact, it’s perfectly ethical – these businesses are practically begging you to do it. And it could put thousands of dollars in your pocket with one click of the mouse. Go here to learn all about it…