As you may be aware, there’s been a lot of political news recently.

From the impeachment to the primary debates, we’ve had wall-to-wall coverage all over the TV networks.

And while the impact of politics on the markets is a little overstated, it is true that some of what happens will affect the market in one way or another.

As we enter 2020, get ready for the volume to be turned up all the way to eleven. But before the beginning of the long process — one that includes caucuses, primaries, conventions and billions of dollars in commercials — I wanted to look at how the stock market generally fares in election years.

The chart below shows the SPDR Dow Jones Industrial Average (NYSE: DIA) with the presidential cycle added as the blue line. I used DIA rather than the actual DJIA index data because DIA can actually be traded. The same general pattern is seen in the index.

While many other analysts look only at the year-over-year changes, my calculation of the presidential cycle looks at each day in the year. My chart is based on data.

The dashed line at the left highlights December 2015, the point we were at four years ago. Notice the election year began with a selloff.

In theory, the third and fourth year of a president’s term are the most bullish. That’s because the president (and/or party) is pursuing reelection and trying to shore up support by implementing programs that usually involve government spending, which, in turn, boosts the economy and the stock market. This is the third year of President Trump’s term and it has been bullish.

I expect 2020 to follow a similar pattern with higher-than-average volatility. It will be an interesting year for traders — but one we can prosper in. After all, we prospered in 2016. 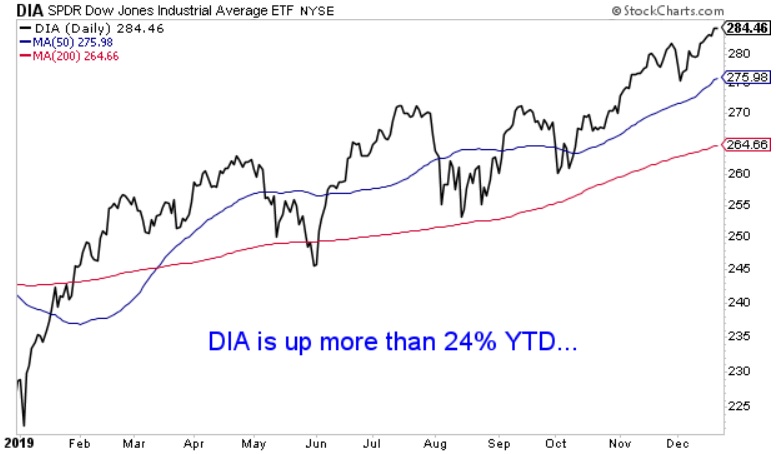 Many of the trades in the coming year over at Income Trader are likely to be in companies we have traded before, companies that offer value and reliable trends. Of course, if the indicators change, I will change my opinion of the company. But thanks to my award-winning indicator, we’ve been able to make profitable trades for income more than 90% of the time — in any market environment.

The Indicator Help Us Prosper Through 2020

Volatility is often assumed to be a useful indicator. Many traders follow the CBOE Volatility Index (VIX) because they expect it to help them spot changes in the direction of price trends. VIX is helpful in finding turning points in the S&P 500 because futures on that index are used to calculate VIX.

In general, traders look for high levels as a sign of a market bottom and low levels as a sign of a potential top. But while VIX provides information about the general market, it doesn’t say much about specific stocks in the market. To find the right stock at the right time, traders need an indicator like VIX that can be calculated for any stock. So I created one: the Income Trader Volatility (ITV) indicator, an award-winning tool I use in my Income Trader newsletter to spot potential options trades.

As you can see in the chart, ITV generally mirrors moves in VIX on SPDR S&P 500 ETF (NYSE: SPY).

I calculate this indicator by finding where the most recent close lies relative to the recent price action. The calculation can be a bit confusing, so instead I’ll explain how it can be used.

ITV, the gray line, has been applied to Apple (Nasdaq: AAPL) in the chart below. There is also a 20-week moving average (MA), the red line, applied to the indicator. When volatility falls, ITV crosses below the MA, which we use as a buy signal. Sells are given when ITV rises above the MA. (Only one buy signal and one sell signal are highlighted in the chart.)

Using this tool, there have been 165 buy signals in AAPL using daily data going back to 2000. And 65.6% of those signals would have been winners.

I have tested ITV with a variety of stocks and have consistently found great results. Risk is also reduced with this indicator when compared to a buy-and-hold strategy. The rules for this indicator are the same general rules that traders apply to VIX. We expect high levels in both indicators to be associated with market bottoms and low levels with market tops.

How To Profit From ITV

Another use of ITV is to find the best times for selling options. This is what I do with my followers over at Income Trader.

When volatility increases, options prices should also move up. This is a relationship defined in options pricing models. When ITV crosses below its MA it becomes a useful timing tool for selling put options. When this happens, the stock in question should offer above-average premiums. It also means it is very likely to move higher over the next few weeks, meaning an out-of-the-money put should expire worthless.

If you are looking for income trading opportunities, you can start with a list of stocks where ITV is giving a buy signal. And that’s what I do each week with my Income Trader subscribers.

We’ve made successful trades more than 90% of the time, thanks in part to tools like ITV that you won’t hear about anywhere else. And there’s never been a better time to join us. We just finished wrapping up our groundbreaking Income Millionaire Project and have a handful of slots remaining. The goal of this program is simple: Show 1,000 regular investors how to generate $1 million in retirement income. Each. If you’d like to get the details, go here now.