I spent some time working in a bank branch as a financial advisor back in the early 2000s. It’s a pretty good gig, if for no other reason than the inordinate number of paid holidays (Columbus Day, Flag Day, Arbor Day). But what really amazes me is that almost 20 years later, the bank hasn’t really changed a bit.

This is a timeless business model.

Just think of the number of products and services that have been disrupted or rendered obsolete since then. VCRs. Dot Matrix printers. Fax machines. Floppy disc drives. But banks are just as viable and important today as they were a century ago. More than that, you could argue the financial system is the backbone of the entire economy. After all, borrowing and lending are what grease the wheels of commerce.

Banks also have very “sticky” revenues. Switching financial institutions is a major hassle, which is why few customers stray and most stay put. That stickiness makes for a recurring and predictable revenue stream.

And unlike, say, a department store or a manufacturer, banks have no inventory to maintain and little machinery or equipment to purchase. Nor do they have to pump billions into research and development to stay on the cutting edge. This is not an industry that requires much innovation.

That means there is generally more cash to distribute to stockholders. In the banking world, generous dividend payout ratios of 50% to 70% are commonplace.

No wonder Warren Buffett has made the banking sector the centerpiece of his portfolio. About 40% of Berkshire Hathaway’s (NYSE: BRK-A) massive $238 billion portfolio is occupied by financial stocks. Buffett just accumulated another 50 million shares of Bank of America (NYSE: BAC) recently, along with increased stakes in JP Morgan Chase (NYSE: JPM) and Goldman Sachs (NYSE: GS).

This trio of heavyweights generated a combined profit of $18.6 billion last quarter – and returned $20 billion to stockholders through dividends and buybacks. Not bad for 12 weeks.

And it’s not just giant money-center banks either. Berkshire also has meaningful stakes in regional lenders like US Bancorp (NYSE: USB) and PNC Financial (NYSE: PNC), among others. It’s not a stretch to say that this is Buffett’s favorite corner of the market – one that has netted billions in gains over the years.

Of course, all banks aren’t created equal. We learned that during the 2008 financial crisis. The months that followed were brutal… souring credit quality, high loan loss provisions, delinquent and unpaid debt, asset write-downs, costly legal settlements. And then came Dodd-Frank, a restrictive piece of legislation meant to restrain banks and rein in some of their riskier trading activities.

Fortunately, that dark chapter is over.

The State Of Banks Today

Banks are doing pretty well today (see the aforementioned $18.6 billion figure). The question is whether they are better prepared to withstand the next downturn. To answer that question, the biggest and most influential must undergo a rigorous “stress test” each year that models how they would perform in a severe recession with spiking unemployment, a 50% plunge in the stock market, crumbling commercial real estate values, and mounting loan defaults.

Fortunately, this nightmarish simulation is entirely hypothetical. And once again, every single bank passed with flying colors. In the Fed’s assessment, “the nation’s largest banks are significantly stronger than before the crisis and well-positioned to support the economy even after a severe shock.” 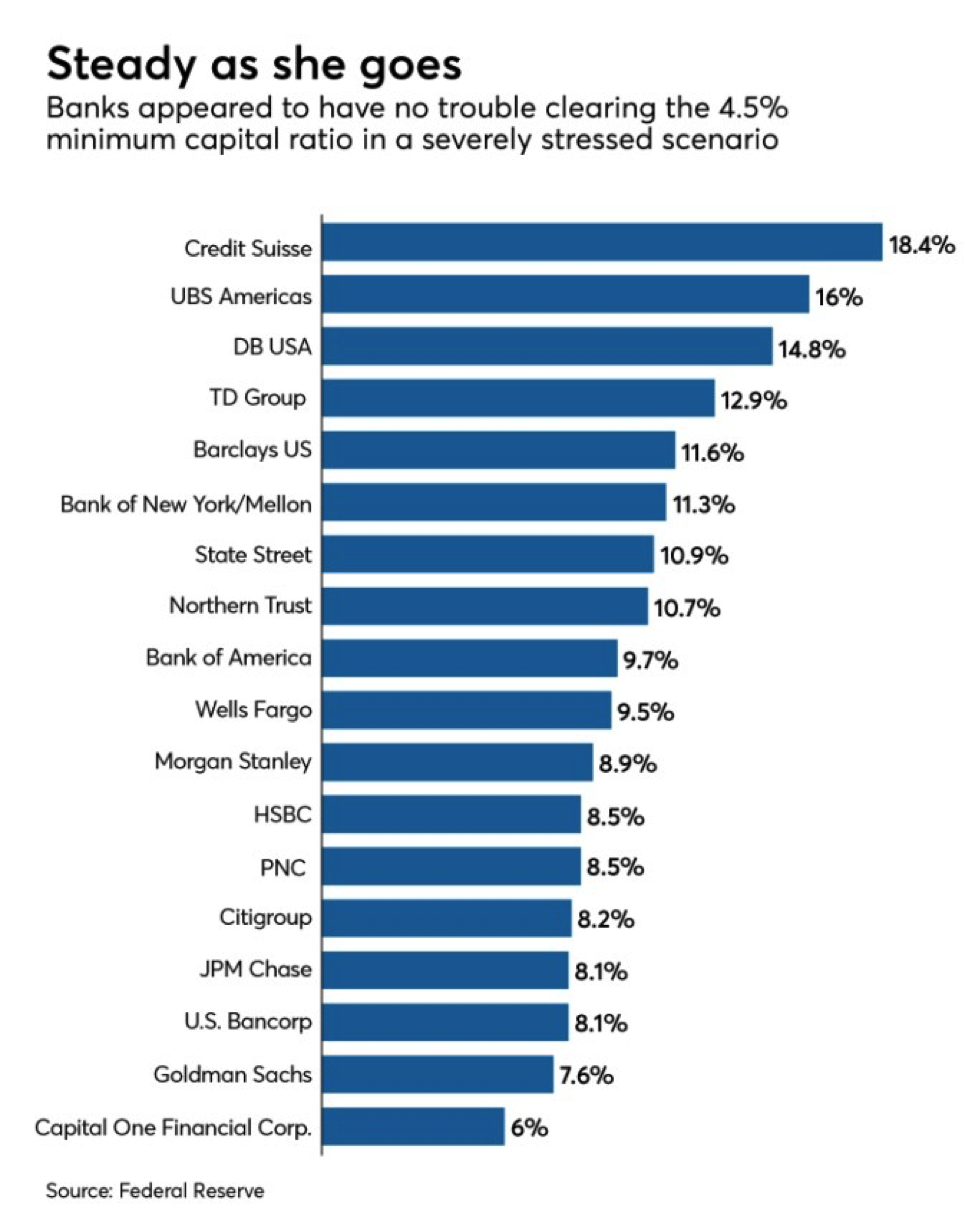 It’s reassuring to know that even in an economic earthquake, these banks can absorb heavy losses without toppling.

There is a second phase of Fed scrutiny, otherwise known as the Comprehensive Capital Analysis & Review (CCAR). This is where regulators assess each firm’s dividend and buyback plans for the coming year and determine whether they are financially healthy enough to meet the proposed commitments. All were given the thumbs-up. Within days, Citigroup (NYSE: C) approved a 13% dividend increase. PNC upped its payout by 21%. And Goldman Sachs hiked its quarterly dividend from $0.85 to $1.25 per share, an increase of nearly 50%.

I think 2020 could be another strong year for the banking sector. Robust economic growth has buoyed loan originations and kept bad debt to a minimum. Meanwhile, the federal government has eased some of the industry’s more binding regulatory shackles. At the same time, a gradual pickup in interest rates could steepen the yield curve.

I’ve got my eye on several attractive candidates as potential additions to my High-Yield Investing premium newsletter portfolio.

But if you’re looking for an all-in-one basket approach, then the John Hancock Financial Opportunities (NYSE: BTO) fund is a good choice. This is a closed-end fund that holds over 100 carefully screened bank stocks. Since January 1995, BTO has been second to none, outrunning 99% of its peer group, posting a cumulative total return of 1,337%. Its benchmark index, meanwhile, only delivered 599%. That’s good enough to take a $10,000 investment to $150,950 during that time.

I think it’s time to add to our exposure in this sector over at High-Yield Investing. In fact, I’ve found another way to invest in the sector that offers a unique approach – and a 7% yield. If you’d like to learn more about my premium service and how to get the name of this pick, go here now.