Use This Simple Trading Tool To Profit In 2020

Moving averages (MAs) are one of the most popular trading tools. Their popularity may be due to their simplicity. Before there were calculators or computers, a 10-day simple moving average could be found by adding up the last 10 closing prices and moving the decimal point one space to the left.

Now, MAs of any length are easy to calculate and widely used. We also have variations of the simple calculation. Rather than just adding up numbers and dividing by the total number, there are at least four other possible ways to find a moving average:

1. Exponential Moving Average: Assigns a greater weight to the more recent market action in an effort to be more responsive to changes in the trend.

2. Weighted Moving Average: Allows users to decide which data should be overweighted and allows for the weighting values to be changed.

4. Adaptive Moving Average: Uses smoothing factors to adjust the number of days used in the calculations to current market conditions.

Each method has its proponents and each of the four methods adds a level of complexity to what was originally a simple indicator. Complexity is only OK if it adds value. Visually, it looks like the different moving averages move in the same general direction.

The chart below is a weekly chart of the SPDR S&P 500 ETF (NYSE: SPY) with the prices hidden so all we see are the moving averages. This eliminates the clutter on the chart and makes it possible to see that the moving averages rise and fall at the same time.

Large delays at bottoms are one of the most significant drawbacks of trading with a moving average.

The adaptive moving average, the thin red line, stands out as consistently lagging the simple MA, shown as the thick blue line. At the bottom in 2009, the exponential MA, the brown line, was the last to signal a buy. That signal came after SPY gained more than 35%. The other MAs signaled a buy after a gain of 25%.

The other significant drawback is that there are a large number of small trades in a sideways market.

Based on the visual comparison, we can say that the averages are all close to each other. More detailed quantitative testing of the various MAs is required to develop a stronger opinion as to which one is best.

How To Use Moving Averages To Your Advantage

An important thing to note, however, is that this indicator will not call the top of the market. In fact, because it is calculated with historical data, it is impossible for any MA to signal at the exact top or bottom.

At the time of this writing, SPY is well above its 200-day MA. As you can see in the chart below, every time the price level has threatened (but not violated) this threshold, the rally continued. At the same time, when it did violate the 200-day MA, it proved to be a timely sell signal. 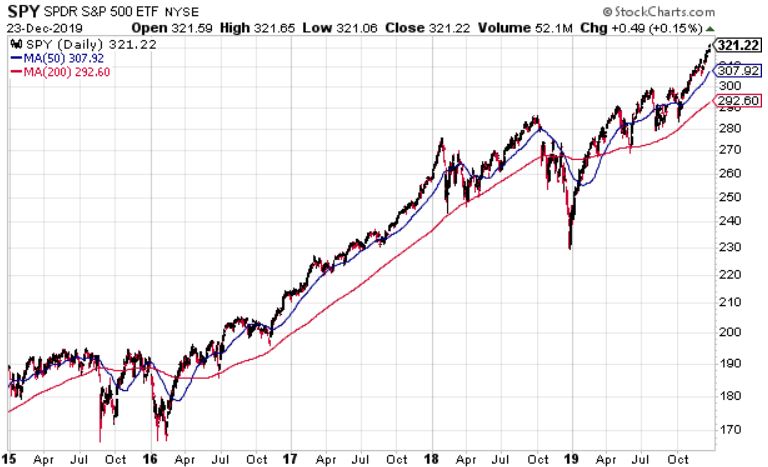 Based on this indicator alone, a bull market would be intact as long as SPY remains above $292.60.

Of course, the precise value of the MA changes daily, and will likely be higher when the next bear market does begin.

There is no way to fully eliminate the problems associated with moving averages. But the best way to use them is to apply them as a long-only “buy” or “sell” signal (i.e. not short). No matter what type of MA is used, when the prices are below the MA, the chances of profitable buys are low. Personally, we recommend considering selling any stock or ETF when the price moves below the 200-day moving average.

P.S. We’ve made successful trades more than 90% of the time thanks in part to an obscure but simple tool that you won’t hear about anywhere else. And there’s never been a better time to start using it…

We just finished wrapping up our groundbreaking Income Millionaire Project and have a handful of slots remaining. The goal of this program is simple: Show 1,000 regular investors how to generate $1 million in retirement income. Each. If you’d like to get the details, go here now.