What To Do When Investing Isn’t So Simple…

From the outset, investing is simple.

Buy a company that produces a great product or service, generates good sales with solid margins, and makes plenty of profit and free cash flow so it can reward shareholders with dividends and/or share repurchases.

Seems simple enough. But in practice, it can be much different.

To understand this, let’s take a look at how this concept stacks up in the real world.

A Tale Of Two Companies

In its most recent quarter, Company A generated $7.4 billion in sales. This was a 2.2% increase over the same quarter a year ago. However, gross income was only $1.4 billion, which leaves it with a gross margin of 18.8%. Operating profit came in at just $347 million, which means its operating profit margin is just 4.7%.

Looking at its balance sheet, we see that it has $6.5 billion in cash on hand and $13.4 billion in total debt.

It should be noted that over the last three years (12 quarters) Company A has only reported a profit four times.

Now, let’s take a look at Company B.

In its most recent quarter, this company produced $46 billion in sales. That was a 17.5% increase over the same quarter a year ago. Gross income came in at $25 billion, which gives the company a gross margin of 54%. Operating profit was $9.2 billion, giving it an operating profit margin of 23%. On that $46 billion in sales, it made $10.7 billion in profit, a 19.3% increase over the same period a year ago.

The company has a massive war chest of $119.7 billion in cash on hand, which is more than enough to cover its total debt of $16 billion.

I will also note that Company B has been profitable in 11 out of its last 12 quarters.

What This Tells Us About The Real World Of Investing

In the simple world of investing, one might assume that investors would have been happy with the quarterly results released by Company B. After all, it had better sales growth, better margins, a better balance sheet, and better overall financials.

But investing isn’t that black and white… it’s not that simple.

These two scenarios are actual results from real companies. Those are the real numbers in their latest quarterly filings.

When Company B released its earnings report, investors weren’t thrilled with what they saw. The stock slid. However, shares of Company A soared. In fact, since it reported earnings January 29, its stock is up more than 55%.

Company A is none other than battery-powered car manufacturer Tesla (Nasdaq: TSLA). Company B is the current Top Stock Advisor holding Alphabet (Nasdaq: GOOGL).

Of course, this isn’t an apples-to-apples comparison, as these two companies don’t operate in the same industry. But it gives you an idea of how fickle the stock market and investors can be, especially during earnings season. 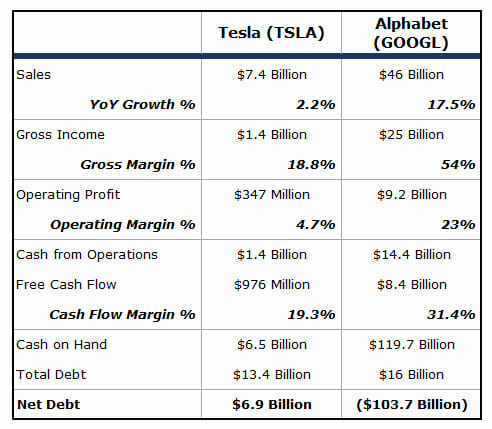 When you look at investing from this viewpoint, it almost seems silly. It just doesn’t make sense why a company that burns through cash, barely turns a profit, has meager sales growth, and had “record” deliveries of 112,095 vehicles in the fourth quarter, has a market cap of more than $138 billion. That’s four times larger than Ford (NYSE: F), a company that sold more than 1.3 million vehicles in the fourth quarter.

But this isn’t about Tesla or Ford. My point in bringing this up is to show how even in crazy times like these, the market still rewards world-class companies at the end of the day. And if you can purchase a world-class company at a fair price, you can do very well for yourself. Even better, when the market is out of whack and other investors are seemingly focused on flash-in-the-pan companies, you can sometimes get companies like this at a fantastic price.

That’s the mission of Top Stock Advisor: identifying world-class companies and purchasing them at a fair price. And that’s exactly what we did with Alphabet. Despite the selloff after earnings, shares have marched back to new highs.

What’s more, since adding Alphabet to our portfolio last May, we are already up nearly 33%. That tops the S&P 500’s strong 19.4% return. And we’re just getting started… 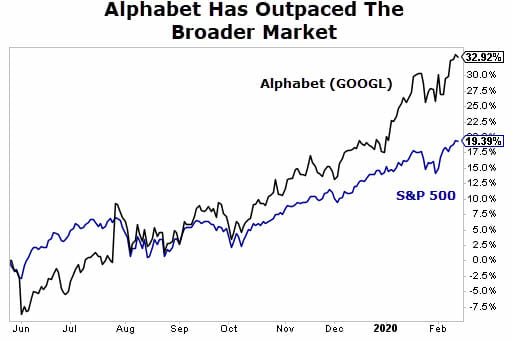 Look, I know it can be hard to maintain the belief that the market will reward this style of investing. You only need to look at the example of Tesla to have your faith shaken. Yet you don’t even need to run through all the numbers that we just did to know that Alphabet is a tremendous business.

Some might say we made “easy money” when we added Alphabet to the portfolio. What’s funny though, is that despite what many might call an “obvious” investment, only about 17% of Alphabet’s outstanding shares are owned by individual investors.

Sure, we might go through some ups and downs. We might be at the mercy of fickle investors, too. But, in the long run, a dominant business should always win out.

P.S. I’ve just put the final touches on a brand-new research report that I think could be the most lucrative opportunity of 2020…

In short, my report is about a little-known satellite company that quietly purchased an Internet tech startup in 2019 at a bargain basement price. Wall Street barely took notice… But according to my research, this company is sitting on a potential $10 billion windfall.

How do I know this? Because, unlike the analysts on Wall Street, I actually did the homework… This company is sitting on one of the most valuable hidden assets I’ve ever seen, and there’s still time to get in before the crowd catches on.

Go here to learn all about it right now.