Another Controversial Top Pick For 2020

I understand that many investors don’t want to invest in companies like the company I wrote about last week, American Outdoor Brands (NYSE: AOBC). But that’s the great thing about my job… my primary focus is on making my subscribers money. I leave the ethical judgement up to you.

Hey, researching great opportunities is hard enough on its own. Besides, the overwhelming majority of my premium readers are rational adults who can take my recommendations or leave them. And it’s my responsibility to present all the options on the table, as I see them.

To be honest, however, AOBC isn’t the only “controversial” pick in this year’s report. In fact, I’m going to tell you about our other “hot potato” pick, since it’s one we’ve written about for years. So if you’re ready, let’s take a look…

Another Controversial Pick For 2020

Make no mistake, Altria (NYSE: MO) is a firm that feeds our vices. And that’s fine. I think we all understand that cigarettes can cause cancer, accompanied by a host of other health problems.

But my job as Chief Strategist of Top Stock Advisor is to find companies that gush cash flow, dominate their market, reward shareholders, and have the potential to produce outsized returns. Like it or not, Altria fits that bill.

To be sure, tobacco companies face significant legal and regulatory risks. For instance, Altria’s main subsidiary, Philip Morris USA, has paid out nearly $800 million in fees since 2004 resulting from tobacco-related litigation.

On top of legal and regulatory risks, big tobacco companies face the prospect of more and more people shunning their product. In the 1950s, as many as 45% of U.S adults smoked cigarettes. Last year, the smoking rate fell to 16%.

Despite these headwinds, Altria’s sales have grown, albeit slowly, due to price increases. Over the last five years, total revenue grew an average annual rate of about 2%. The company pulled in more than $19.8 billion in revenue last year. Yes, that sales growth isn’t really anything to write home about. But remember that wonderful, capital-efficient companies don’t need tremendous sales growth to be successful.

Altria boasts a portfolio of well-known brands that can command premium prices. Its products include Marlboro, Copenhagen, and Skoal. Marlboro has been the best-selling cigarette brand in the United States for more than 40 years and boasts a market share of 40%. And remember, Altria is the largest distributor of cigarettes in the United States.

The Vice That Gushes Cash

If you’ve recently bought a pack of Marlboros or a can of Copenhagen, you know they’re not cheap. Granted, much of that stems from excise taxes. These federal, state, and local taxes are included in the price of a product. Excise taxes are a significant cost for consumers and Altria.

However, even after excise taxes and other business expenses, Altria is extremely profitable. Its net income margin has averaged a robust 32.8% over the last decade. That’s not only better than its peer average of 18%, but it tops other companies that are known for their profitability like Apple (Nasdaq: AAPL), which has a 10-year profit margin average of 19.8%.

But net income is only part of the story… Altria generated $8.4 billion in cash from operations, which gives the company a cash profit margin of nearly 42%. That means for every dollar in sales, $0.42 goes straight to cash flow. For reference, anything above 20% is considered great.

One thing about cigarettes is that they haven’t changed in design much over the years, so Altria doesn’t have to spend a ton to upgrade new technology or machines to produce its product. Its factories churn out more than 100 billion cigarettes a year, without needing many upgrades. That means the tobacco titan doesn’t have to dole out a ton in capital expenditures, which results in a lot of free cash flow.

Free cash flow is the money left over after all the bills and expenses have been paid. Companies can use that cash to reward shareholders in the form of dividends and share repurchases, pay down debt, or reinvest back into the business.

Altria has been a steward of rewarding shareholders, increasing its dividend for the 54th time in the last 50 years. The cigarette-maker has grown its dividend an incredible 65.3% over the last five years. Its annual dividend of $3.36, gives the stock a hefty 7% dividend yield.

We know the fundamentals of the company are rock solid, but Altria understands that combustible cigarettes are on a steady decline, which is why the company spent $12.8 billion in December 2018 for a 35% stake in JUUL Labs — the leader in the burgeoning electronic cigarette market, or “e-cig” for short.

That makes Altria’s investment in JUUL Labs very enticing, as it commands roughly 75% of the e-cig market with its distinguished JUUL pen.

But of course, it doesn’t come without its hurdles…

The E-Cig Market Is Under Attack

E-cigarettes, also called vape pens, have been in the press a lot recently… and not for good reasons.

The Centers for Disease Control and Prevention (CDC) has identified more than 2,000 cases of “mystery lung illnesses” tied to vaping, and as of November 5, 39 people have died.

This coupled with the fact that vaping has become popular amongst middle- and high-school students have brought the industry under scrutiny. Many states have banned flavored e-cigarettes, which seem to be most popular amongst the youth. The state of Massachusetts took things one step further by announcing at the end of September that it would place a four-month ban on all sales of vaping products, not just flavored ones.

The crackdown has been a major headwind for this burgeoning industry. When Altria released third-quarter results on October 31, 2018, it took a $4.5 billion write-down on its Juul investment. However, outside of the write-down, Altria posted better-than-expected results. It had earnings per share of $1.19 on $5.4 billion in revenue, increases of 10.2% and 2.3%, respectively, over the same period a year ago.

There’s no arguing that the e-cigarette industry is under the microscope.

But here’s the thing… more than 10 million people use e-cigarettes to get their nicotine fix each month. If there was a widespread problem with vaping nicotine and e-cigs in general, we’d be seeing more incidents of illness.

Furthermore, even if they banned e-cigarettes completely, which is highly unlikely, it’s not like people will simply give up their nicotine habit. They will switch back to regular cigarettes or chewing tobacco to get their nicotine fix.

Not Just Tobacco (Wine, Beer, and Cannabis, Too…)

We already covered the fact that Altria has exposure to the growing e-cigarette market with its investment in Juul Labs. But management has also diversified into another surging industry: cannabis.

In December 2018, Altria made the bold move to bolster its portfolio and enter the rapidly expanding marijuana market with a $1.8 billion investment in cannabinoid producer and seller, Cronos (Nasdaq: CRON). In exchange for the cash, Altria received a 45% stake in the Canadian marijuana company, along with warrants to increase its stake to 55% majority ownership.

To top off its portfolio, the tobacco titan also has a 10% stake in the $135 billion beer behemoth, Anheuser-Busch InBev (NYSE: BUD).

And we haven’t even gotten into the company’s wine business. That was responsible for $668 million in revenue in 2019 as well. 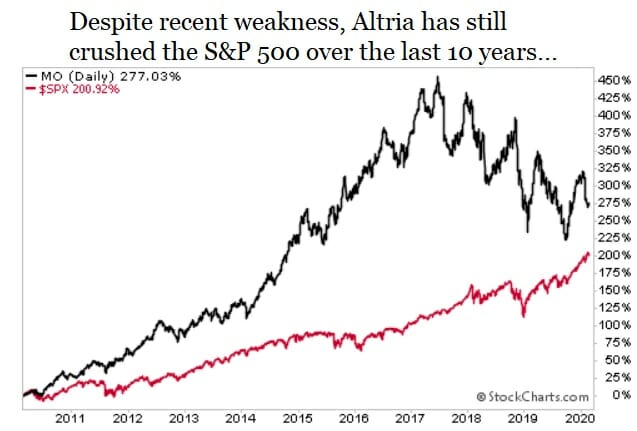 There’s no denying that the industry has faced some headwinds that have curtailed shares of the stock. Since January 2018, shares of Altria slid nearly 27%. (They have already rebounded slightly since this recommendation was first issued to my Top Stock Advisor subscribers).

But the fallout is providing an excellent investment opportunity…

Shares are trading near their five-year lows when looking at multiple valuation metrics. For instance, shares are only trading for 10.7 times next year’s earnings. That’s well below Altria’s five-year historical average of 17.

You can pick up shares for only 4.5-times annual sales, which is a 25% discount to its historical average. Comparing the firm’s enterprise value (EV) to its earnings before interest, taxes, depreciation, and amortization (or EBITDA), we find that it’s EV/EBITDA multiple of 7.9 is also below its historical average of 8.3.

At these valuation levels, shares of Altria have significant long-term upside.

The icing on the cake is that the company has a long history of rewarding shareholders. So not only are you getting a market-dominating company at a discount, but you get to collect a hefty 7% dividend yield while we wait for the market to realize its mistake.

The vaping crisis has created an opportunity to snag shares of a company that gushes free cash, has a strong history (over 50 years) of showering shareholders with dividends, and gives you exposure to two of the fastest-growing industries (e-cigarettes and marijuana). All while collecting a dividend yield more than three-times what the S&P 500 offers. Altria is a “Buy” up to $55 per share.

P.S. If you’re looking for more picks like this, then I have good news for you…

New Top Stock Advisor members can still get the full, complete Top 10 Stocks report for this year. Not only that, but you’ll also learn about the biggest opportunity I’ve come across in years…

You see, I’ve been closely following a little-known satellite company that just paid a measly $26 million for a tech startup. And this tiny company was sitting on an absolute gold mine…

As it turns out, this startup owned exclusive global rights to a huge slice of satellite communication frequency channels. And this hidden asset could be worth up to $10 billion in the future.

To get a full briefing on this fascinating opportunity, go here now.