Why The Dividend Aristocrats Deserve A Place In Your Portfolio

Let’s hop in the time machine and take a quick trip back to 1995. Toy Story was playing in movie theatres, the OJ Simpson trial had us glued to the TV… Michael Jordan came out of retirement and led the Chicago Bulls to three more NBA titles.

This was the year eBay went live, just months before Jeff Bezos went public with a small online bookstore called Amazon. Microsoft unveiled the Windows 95 operating system. And on November 21, the Dow Jones closed above 5,000 for the first time.

The mid-90s may feel like yesterday, but in the business world, a quarter-century is eons. Entire industries have risen and fallen. And the global markets have been tested by some severe economic shocks… the Asian currency collapse of 1997, the dot-com crash of 2000, the terror attacks of September 11, 2001, and the financial crisis and severe recession of 2007/2008.

Many companies that were household names in 1995 are no longer with us today. But through it all, a handful of companies have prospered in both good times and bad, rewarding their shareholders year in, year out, for the past twenty-five years.

Of course, I’m talking about the Dividend Aristocrats.

It’s no secret that we are big fans of dividend payers over at High Yield Investing. Those reliable quarterly distributions have accounted for a surprisingly large portion of the market’s total returns over the long-haul. But if there’s one thing better than a regular dividend, it’s one that grows with each passing year.

Thanks in part to lower corporate taxes and a healthy economy, there were 2,381 dividend increases among U.S. stocks in 2019. Collectively, those upward adjustments represent $56.6 billion in additional yearly income for investors.

But not every business had the financial health to raise payouts. There were hundreds of companies that simply maintained their current distribution. And believe it or not, 334 were forced to cut their dividends (or suspend them entirely) last year. That follows 403 reported dividend cuts in 2018.

That’s all despite favorable economic tailwinds. As you might expect, those numbers swell dramatically during downturns when corporate cash flows contract.

That’s what makes the Dividend Aristocrats such a rare breed. All it takes is one bad year, and an otherwise solid company with maybe 15 or 16 straight increases under its belt has to start back over at zero.

So who is in this special group? (For a full list, go here.)

Some highlights include familiar names such as AT&T (NYSE: T), Coca-Cola (NYSE: KO), and Wal-Mart (NYSE: WMT). Those stocks have increased dividends for 35, 57, and 43 years, respectively. But some of the 65 members are largely unknown.

Take A.O. Smith (NYSE: AOS), for example. This company makes water heaters for residential and commercial use. Or Becton Dickinson & Company (NYSE: BDX), a top supplier of medical devices and laboratory instruments. These aren’t exciting product lines – but boring can be good.

Aristocrats come from all corners of the market, selling everything from hamburgers to steel to missile defense systems. Many industries have representation, including consumer staples, telecom, technology, and banking. But all these businesses share one key trait: the fortitude to raise dividends for at least the past 25 consecutive years.

5 Traits The Dividend Aristocrats Have In Common

Forget about complicated stock screens using esoteric data. Some work, others don’t. There are worse strategies than simply focusing your investment search on the Aristocrats. You won’t find any riff-raff in here. Less than 1% of U.S. listed stocks gain admittance to this exclusive society.

Even without combing through SEC filings, we instinctively know that an Aristocrat possesses each of these desirable traits.

1. Proven Business Model:
For every new business that succeeds, there are maybe a dozen that fail. Every Aristocrat has been tested in the arena of combat. Most are mature leaders in their fields with established national brands, efficient distribution systems and other protective economic moats that provide a competitive advantage, the key to maintaining superior long-term returns.

Reported GAAP earnings can be bent, twisted, and manipulated. But you can’t fake cash distributions. Either the money is there or it isn’t. Since other operating needs (payroll, rent, etc.) are always met first, the simple act of a voluntary dividend tells us there is a cash surplus to share.

Raising the payment also sends a bullish message. Nobody promises more if they are expecting income to falter. Reaching Aristocrat status is the hallmark of a quality business that consistently generates more cash than it needs.

It’s been said that all businesses are either growing or dying. You can usually rule out the latter with an Aristocrat. After all, it’s nearly impossible to hand out tens (or hundreds) of millions in additional dividend payments each year for a prolonged period if the earnings pool is shrinking.

Sure, an Aristocrat may go through the occasional slump. But they usually don’t last long. Common sense says that 25 straight years of rising dividends reflect an underlying business that has far more good years than bad.

Having the ability to generously raise dividends is one thing – the willingness is something else entirely.

History is littered with companies that were run into the ground by ill-advised mergers, reckless spending, and other questionable decisions. Many didn’t pay a penny in dividends.

Aristocrats are run by skilled management teams that know how to balance the deployment of capital, investing what is needed to grow the business and returning the rest to stockholders.

It also goes without saying that once a company has qualified for Aristocracy, it wants to stay there. These impressive dividend track records are also attractive selling points to the investment community. So companies with winning streaks on the line tend to avoid taking any unnecessary risks that might jeopardize their dividends.

Any company can raise dividends when the economy is red-hot. The true test is whether it can still generate excess cash flow when conditions cool.

By virtue of their membership, Dividend Aristocrats have demonstrated an ability to not only withstand severe downturns – but continue raising their distributions without skipping a beat. Some long-time members such as Johnson & Johnson (NYSE: JNJ) and Procter & Gamble (NYSE: PNG) haven’t missed an annual dividend hike in more than 50 years, a period that includes no less than six major economic troughs.

That doesn’t happen without products that are, to varying-degrees, recession-resistant.

Beating The Market: Icing on the Cake

With all these points in mind, it’s not surprising to learn that the Dividend Aristocrats have held their ground relatively well during fierce market downturns.

During the massive fourth-quarter selloff of 2008 (the worst since the Great Depression), this group only lost 16.4%, versus a much steeper 21.9% decline in the S&P 500. That’s par for the course. During the last five bear market pullbacks, the Aristocrats outperformed the S&P all five times. And they are often quicker to recover – taking less than 12 months to rebound into positive territory on four of those occasions.

But that downside protection doesn’t mean you have to sacrifice upside potential. Quite the opposite. Over the past 10 years, the Dividend Aristocrats Index delivered an annualized return of 14.58%, versus 14.12% for the overall market.

In other words, it beat the market – and with lower volatility. 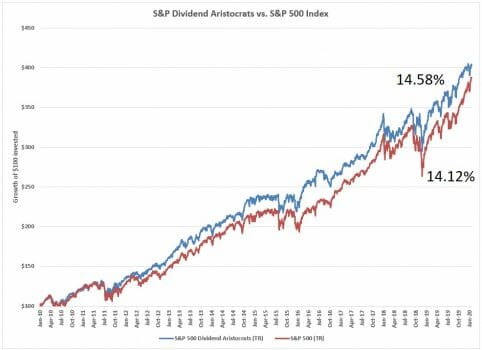 It’s no wonder then, that billions have poured into funds such as the Proshares S&P Dividend Aristocrats ETF (NYSE: NOBL). If you’re looking for a broad basket approach to the Aristocrats, then that’s your ticket.

Funds like this certainly have their merits, but I’d rather pick my own favorites (and save the fees). Over at High-Yield Investing, we already own Realty Income (NYSE: O) — one of the newest initiates into the Aristocrats club. 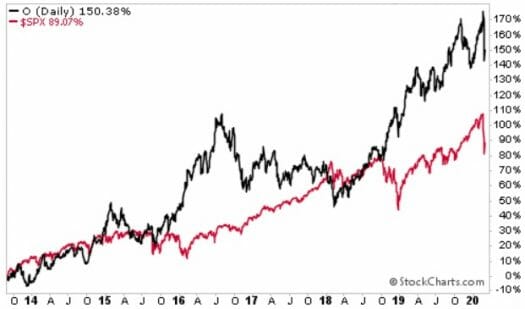 Former holdings such as People’s United Financial (Nasdaq: PBCT) are also in there.

Which begs the question… Is there another worthy candidate in this distinguished index? The answer is yes – and we recently added it to the High-Yield Investing portfolio. And if history is any guide, we’ll be glad we did.

Go here to learn more about High-Yield Investing and get full access to my portfolio.