What’s Behind The Selloff? Here Are 3 Possible Reasons…

The stock market is undergoing an official correction, which means the price has fallen at least 10% from its high. The question is why.

I’ve written about this before as the situation was unfolding. But as I consider the current state of the stock market right now, there are the only three possibilities I see… and two of the three point to even lower prices.

The best case is that the market is overreacting to the coronavirus. But we have seen pandemics before, and traders didn’t react like this. For example, in 2009, pH1N1 influenza swept across the globe. According to the CDC reports, from April 2009 to April 2010, the United States experienced approximately 60.8 million cases, 274,304 hospitalizations, and 12,469 deaths due to the virus.

And what did the stock market do? A lot, actually. Over that same period, the S&P climbed 48%. 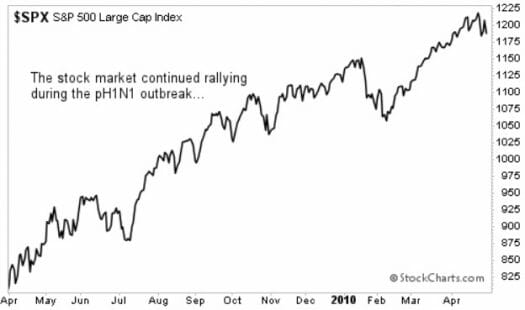 So, the last time we dealt with a pandemic, the broader market gained nearly 50%. That tells me it’s probably not coronavirus dragging stocks down now. Traders can look past the virus as they did in 2009. That pandemic occurred after stocks had bottomed, after the end of the recession that began in 2008 was in sight.

[Related: Our Experts Weigh In On The Selloff]

Let’s assume this decline is not simply due to an overreaction to coronavirus fears. We can cross out the first possibility.

Here Are The Three Possibilities I See:

2) The decline is a justified reaction to the possibility of a pandemic.
3) This is a typical decline that precedes a recession.

Looking at the two remaining choices, I don’t think the decline is necessarily being driven by just one or the other. I think it’s more likely that it’s both.

The coronavirus most likely will get worse. The reaction we are already seeing is based on a handful of cases and relatively few deaths. The 2009 H1N1 virus affected about one in five people and killed more than 12,400. Details of that story were lost in the optimism of the economic recovery.

In this environment, where fear is high, the virus will slow the economy. And this time, we don’t have the benefit of an economic book. In fact, even before the first coronavirus cases were announced, the economy was already showing signs of a slowdown.

Just last spring (which seems like such a long time ago), the yield curve inverted, which was an indicator that a recession was likely to start in the following 12-18 months. But it seems that signal was largely forgotten in the exuberance of last year’s stock market rally.

Now, those chickens are coming home to roost.

So, if it’s true that this decline is both (a) a justified reaction to the possibility of a pandemic, and (b) a typical decline that precedes a recession, what happens next?

What Could Happen Next

Well, it’s been about a year since the “inverted yield curve” signal, which tells us to expect a recession 12-18 months following an inversion. Based on that timeline, we can expect to see a recession this year. Current conditions indicate the recession could already be starting.

However, because economic data is reported with a lag, economists won’t be able to pinpoint the beginning of the recession until at least eight months after it starts.

We can’t wait for the official start of the recession. We need to act using data the market is providing.

The first thing the market is telling me is to not stretch beyond what my system is telling me. It’s a proven system that’s delivered winning trades for Income Trader readers more than 90% of the time (going back to 2013). And right now, it’s telling me to hold tight and wait for the dust to settle.

This isn’t a surprise after the fastest 10% correction in the history of the S&P 500. More than 84% of stocks in the S&P 500 are in corrections, meaning they are at least 10% below their 52-week high. Just 8% of stocks in the index are up over the past week, and none gave an Income Trader Volatility (ITV) “buy” signal.

These are unusual market conditions, and I don’t expect them to continue for an extended period. There should be ITV signals in the next few days. If I see significant opportunities early next week, I will send a recommendation to my readers as market conditions change. You can go here to learn how to put your name on the list and get my latest trades as soon as they are available.